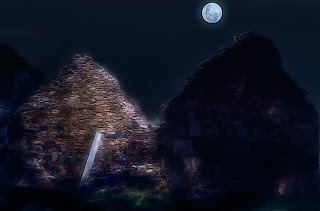 Alone, Kate stands here in the cold pale moonlight. Tears well in her eyes and the old farm house shimmers.

She has been summoned here.

Light spills out of the windows. Shadows move around the house. Her heart jumps. And then the windows dim. Just a trick of the light. Stock are moving through the old yards.

She stares at the deserted farmhouse, and remembers. A tear starts to fall.

As the tear falls, she imagines that the farm windows light once again. This time she sees a bonfire burning in front of the farmhouse. The wind rises, and she discerns the sound of the fiddle and whistle filling the night air. She starts to hum the final bars of a local version of ‘Kelly from Killanne’ and remembers the sounds of laughter and the smells of a bush feast.

‘Katie’, he says softly, that man with the broken lip. The one she nursed back to health after a trooper shot him. The one whose face she touched, as he lay sleeping.

She does not move, frozen in time.

The fiddle commands silence with the first few bars of ‘The Rising of the Moon’. A ghost of the men, Gavin starts, ‘And come tell me Sean O'Farrell, tell me why you hurry so’.

She remembers the promises he made with a smile on his face as the gathering at the farm shout their appreciation and sparks from the bonfire and the chimneys fly high into the night sky.

‘Yes! Gold – fairy dust and rings, enough for a good life, a respectable life, far from this wretched place. A life with a cottage and a garden’, he said.

In the distance, Gavin continues, ‘Husha buachaill hush and listen and his cheeks were all a glow’.

‘Gold enough for a fine hat and two changes of clothes a day. Two pairs of shoes. And cows in the field, chooks in the barn and a man to split wood.’

‘I bare orders from the captain get you ready quick and soon’.

‘And gold enough for children.’

Back at the farm, mugs are beating the tables in tune with Gavin ‘For the pikes must be together by the rising of the moon’.

She stares at the light streaming from the farm. Shadows flickering in the cold pale moonlight.

She tells the farm, ‘We need nae gold, Jemmy.’

‘Katie’, he says softly, ‘come quick’. She takes his cold hand and they walk together to the brook, her moon shadow ahead of her.

Gavin continues, his voice fading into a quiet murmur, ‘And come tell me Sean O'Farrell where the gath'rin is to be, At the old spot by the river quite well known to you and me’.

She moves towards the mountains and now Jemmy’s voice is clear, slewed a little with hard liquor. ‘I have talked to them – I have done my part. I am going back south – along the cart track – all the way to Gippsland where we push the squatter’s fat cattle.’

‘There is a place down there – good pastures and safe.’

‘I will build us a stone house and strong fences. A place for you to practice cooking and grow hens. Enough milk for home and poddies.’

‘And I will sew you fine dresses and plant an orchard.’

She smiles at this remembrance, ‘And I will cook apple cake and serve it with clotted cream.’

Her heart quickened. ‘Just straw flowers is enough for me’, she says.

‘Fairy dust and rings’, he adds, ‘and a man to split wood, to two to quarry stone and a butcher. And a fine hat and two changes of clothing a day, and fine silver on the table.’

‘Fine silver on the table’, she repeated, feeling him close.

And the sounds of the creek filled the night.

The fiddle is paused back at the farm as the boys retired to the men’s room and a baby was quieted by the suck.

All around the fall of the brook, the frogs in the side pools, the sounds of an owl calling, kangaroos grazing near and the slap of stock moving through the bush.

A stone curlew cries a warning.

‘When will I see you next?’

‘I will send word and a cart when the troubles end here.’

He presses a gold sovereign into her small hand.

She trembles and shakes her head wildly.

‘I don’t want this gold’, she cries, but he holds her hand shut.

‘I will send word and a cart when the troubles end here’, he repeats.

Her tear hits the ground, and the creek dries. He fades into drought.

And here she stands, in the pale moonlight, in front of the old farm house, with the gold sovereign in her hand.

The farm house is dark, cold and dank. The thatched roof has fallen. The sheets on the beds a decayed ruin, and the fireplace cold.

In the mountains beyond, a warrigal cries for his mate.

For a moment, he is there beside her, telling her 'I told you I would come back for you.'

Then the moment passes, and, alone, she sinks to the ground.

[When i moved into the Tallaganda, which is over the hill to Jerrabatgully, i had the privilege of  meeting many of the elderly folk living in the high ridges and listening to their stories. Many of them have long since travelled to the stars. It has taken a long time to understand the stories or accept that the stories were about real people.

Many people helped me along this path - here particularly Jai, who helped me visualize the colonial Irish ruins.]