Catalyst: Visits From the Past 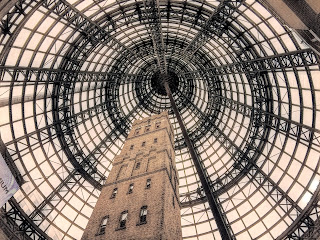 They are trying to be helpful. They have started to send Labrinth into the future, my future. She is projected into a little Chinese Cafe in downtown Sydney. It is a bit of a drive, but apparently, it is a safe defense location, and they can control the environment.

So I still have some contact with the past. We drink black tea while she chain smokes.

She showed me her gun and looked dangerous. She tried to reassure me with cheery stories of the past, how things are going back there with the threat of imminent nuclear war and Elvis. She asked lots of questions and gave me tasks.

I just nodded. It was good to see her. But I did not tell her that Elvis is dead because of the risk of another time quake. Still.

Her eyes narrowed when she saw people talking on mobiles or drinking Cappuccinos.

Met with Labrinth in Sydney. I explained that since she started to make her annual trips into the future, to the little Chinese restaurant, the time quakes had become deeper and had become dangerous.

I told her of my doubts and that I could not give her any more information. I said it was comforting to know that there is a full team of scientists and academics back in Mission Control trying to “retrieve me.” But now that is not enough. Even if they can get me back, I will have aged.

Worst, they don’t believe in the future, they keep changing it.

She was very patient, telling me with a hard voice that they really had a plan.

I told her I need a way to sort this out now. There is a lot of amazing technology in this new world. If I can develop my own time machine, I might be able to go back and stop the program from starting.

We argued. Her eyes flashed, and I saw her teeth. Other diners began to watch, as she became angrier. I remembered the gun as she pointed her hand at me and told me to get a grip on reality. She faded back to 1975 still cross with me.

I sat at the table, not moving until the other customers left. Reality hit me.

I am a time traveler. I come from the last half of the twentieth century, but the mechanism broke, and now I am lost. I can’t get back. It is all confusing. Things keep changing. Some days I don’t know if I am chasing dreams or being chased by demons.

I am not an engineer. I will need help. I need to track down what happened to the program, why it got shut down, and whether they ever worked out how to fix the artifact.