Love #13: Here is Gold of the Otter's Well gleaming 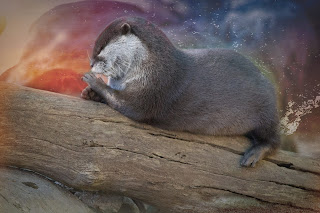 "Here is gold of the otter's well gleaming
Rewarding first one then another,
Here is treasure of Fafnir the fire dragon
Both forfeit by kissing my first and only love.
No wearer of ring, no wielder of power,
nor pick of sharp weapon has taken my gold;
Never more costly were such deep kisses -
And the dream of my love betrayed."
Kormac

Kormac was a young warrior poet. He was often in trouble because of his poetry. At that time, poets were often sued for libel.

Kormac came to visit her.

Steingerd was spinning thread from wool using a drop spindle. The spindle, a straight stick three hand lengths long, and weighed by a stone whorl, already had a yard of thread tied around it. With her right hand she drew out some hands-length of wool fibers from her left hand. When happy with the thickness of the fibers, she set the whorl moving, twisting the fiber into yarn. The newly spun yarn then was wound with the rest onto the spindle and she started to draw the fibers down again.

Kormac watched for a moment, then fixed his eyes on the other women-folk and motioned them to leave.

Steingerd asked him, "So you have come to learn spinning?"

Kormac thought for a moment, "You are very slow. Perhaps I could show you how to spin faster."

Steingerd's eyes flashed, "Don’t be foolish, the fleece is coarse and..."

Then she saw a smile at the corners of his mouth. Too late she started to rise, spindle and fiber still in hand. He stepped behind her and pulled her onto him, matching his body to hers. He reached up and caught her two hands at the wrist.

Kormac said, "Let me be your bench."

Steingerd laughed, "But my feet cannot reach the ground".

Kormac said, "Neither did your spindle".

Steingerd smiled and twisted her bare feet around his ankles, she said, "Caught you".

Steingerd relaxed a little into him, warning, "My hearth-partner is nearby. One of the girls will fetch him. "

Kormac said, "Yes. He will come, shouting and panting up the stairs. But you are simply showing me how to spin. Or I am showing you how to spin faster. I cannot remember. Please continue, don’t let me interfere."

Steingerd started to draw the fibers back into form, feeling his arms become light, following her movements.

Kormac said, close to her left ear, "Anyway, the tinker is in my debt and we will not come to blows because his brother remains home".

Steingerd felt a thrill of electricity and spun the whorl low and fast.

Kormac said, "I will tell him you are simply spinning the thread for a shirt for me."

Steingerd frowned, "This thread is not for you. It is for the witch Gunhild, the new wife of the king's son, Eric. She has been sitting here with me."

Kormac’s hands tensed, “Of what have you been speaking? You and I have been hurt grievously by the love curse of a witch.”

Steingerd said, “Gunhild is different. She and I have exchanged life stories. I have told her of your pursuit of me. She told me how she rescued the King’s son, Eric, by the White Sea one past summer. And how she bewitched him with her eyes.”

She spun her head around and looked into his eyes, and then found his lips with hers. She kissed him deeply, feeling his momentary confusion quickly replaced with fire. She pulled back a little, "Do you know why I just kissed you?"

He released her wrists, encircling her waist instead, and she leaned back into him.

Kormac said, "No. I don’t care". And this time he kissed her as deeply as he held her.

Steingerd said, "Gunhild is preparing me a potion, which will let me bewitch you with my eyes."

She disentangled herself from him and walked a little way. She carefully put down the spindle. Then she turned to face him. She walked back to him and sat on his knees facing him, as a wife sits with a husband.

Steingerd took his face in her hands and gave him one more deep kiss. She pulled back to find his eyes closed with tears.

Kormac said, "I would stay with you from now if you agreed. You do not need a potion to bewitch me. That is not the problem."

For the fourth time she kissed him, this time starting with his eyes. Steingerd asked, "And what is our problem, man that I used to love?"

Kormac looked at her and said, "Your love changes with the weather".

[this is a second fragment from my retelling of the Icelandic saga concerning Kormac and Steingerd. The intensity of the relationship resonates across the ages - sometimes fierce love, sometimes fierce hatred.]