Nanima Falls, Wambool (Macquarie River), Wellington in the nation of the Wiradjuri 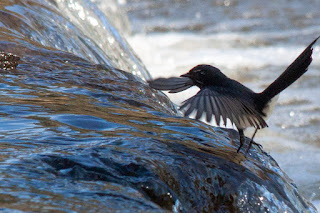 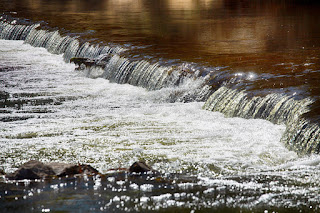 Out west, the great rivers slow and eventually seep into salty marshes. There are few hills to speak of, and when it rains, the water sits sullenly, unmoving, until the sun drinks it away. As young children, we would climb haystacks and imagine what a hill might look like, but never conceived in our wildest dreams a waterfall in the marriage of hill and water. 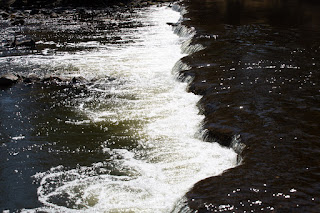 The Wirrum Wirrum people (a clan of the Wiradjuri) call this, their home, Binjang (the beautiful valley). They explain the importance of these places to allow the first people to cross rivers - which can be difficult in years or decades of above-average rain. These river valleys are rich troves of food but they contain many dangers - particularly underwater trees ("snags") which can trap the most experienced (and explains the strict first people law prohibiting entering water when muddy or reflecting clouds). Like the Wirrum Wirrum woman Eumalga, my mother once almost drowned trapped in a snag in this river, while skipping school, downstream at Dubbo. 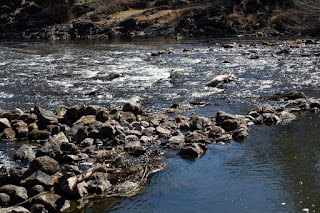 Early colonials called a rocky area on a creek bed a 'fall' signifying where a wagon drawn by oxen might cross without bogging. At Nanima, as the river closes in on the rocky mountains near Wellington, the river encounters a granite pinch and runs roughly over a hard surface. Ponto Falls, further down the river, has a much more pronounced pinch and a longer run. You may find some of these 'falls' on old maps, but most have lost significance with permanent bridges. Still, some are now stock reserves, rest areas, or recreation places. Others require detective work, scouting roads called after a fall or references to falls in old town histories or adventures in explorer logs.

Nanima Falls has fallen off the maps but lies on a town road still called "Falls Road." The first explorers to float down the river here talk of encountering a river fall somewhere in this vicinity. The falls we see today quite different from those of past times. Masons and road builders have broken the original rock wall (and spread the dross downstream). It has been leveled and tarred to create a weir and level crossing. 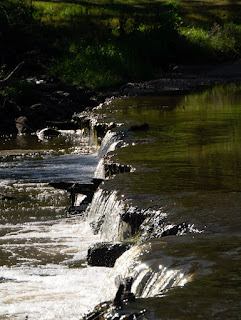 Elsewhere snowmelt sets the great western rivers flowing at the beginning of Spring. It is sometimes enough to turn the dull western grey into the vivid green. Today, this great river's waters are impounded in lots of places upstream, and sometimes no water reaches this place. There is debate further downstream to create a new weir to regulate the meandering river's water. 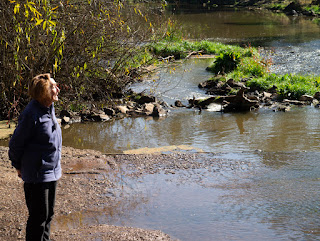 Some of the original rock platforms are still here. I imagine that the first people came here when twilight approached. 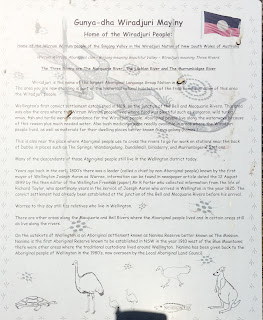 I expect that the Wiradjuri warrior and mounted policeman, Sir Watkin Wynn, once sat here. We don't hear about the old Wiradjuri lawmen anymore. But the people well knew them in their time. The early governors of the colony of New South Wales relied on them. Both Governors Brisbane and Darling actively sought to enlist them in the service of the growing colony. Later they were an essential part of the early Queensland Mounted Police. These lawmen's names are recorded in old colonial records – Wannamutta, Werannabe, Sir Watkin Wynne, and Bilecla. Perhaps the reason we don't hear about the Kadaitcha these days is that we don't believe in magic. So, the memory of the walkers has gradually faded and the book-learned scholars who no longer leave their city sinecures and who spend their days and nights undermining each other argue whether they ever existed at all.

Sitting near these falls, listen to the water telling of yesterdays adventures upstream. Around a campfire, listen to the eucalyptus crackle telling stories of the dreaming: stories that are as real as the sound of the water or the flames warming your face. 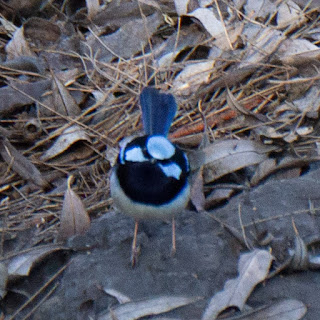 We might tell many stories of this place. That of Eumalga, the daughter of Warree and the convict known as Saville (real name John Luscombe) is best known. But that one, which starts with Eumalga almost drowning in a snag while catching a turtle (wyabooka) in the swollen river, is sad. Let us listen to it another day. Let us, instead, reflect on a story told about Sir Watkin Wynn, which is a story for our time.

In 1872 a local newspaper reported that Sir Watkin Wynn, the well-known one-armed former member of the mounted police. Wynn, a Wiradjuri warrior, gained fame for tracking down the Clarke Gang south of Braidwood. Later in life he travelled throughout Wiradjuri land. One day he saw a blind man standing in front of Coyle's hotel in Hill End and inquired if he was blind. On being assured that he was, Wynn asked if he was hungry. This question was also replied to in the affirmative. Wynn took the blind white by the sleeve, gently led him across the street to Mr. Luff's butcher's shop, paid for 3 lbs. of the best mutton chops, which he gave to his afflicted white brother, and then quietly walked away, as if he had done nothing unusual. 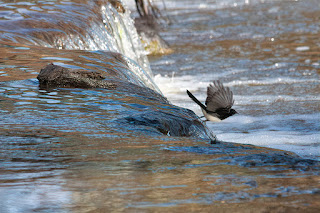 This is a place of birds - my mother and i found dozens of finches and wrens playing near the water. Australian children call the black fantail in the image above a "Willy Wagtail." It repays the moniker by calling out "sweet pretty creature" day and night. I often see them skimming the water to scare out insects, but this is the first i have seen dancing on top of a fall.

Perhaps the spirits of the past still dance on the edge of the falls. Nearby, little remains of a mission that impounded members of the Wirrum Wirrum. Descendants of the people proudly make their homes in the valley. 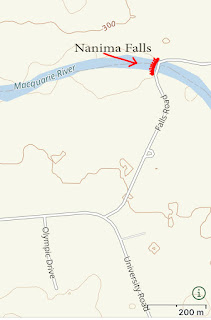 Ponto Falls, referred to above, is well signposted on the road between Wellington and Dubbo. Another similar flat rocky fall is far upstream, on the intersection of Bosworth Falls Road and the Fish River (really the Macquarie, by a fancy name to avoid hard questions about Sydney stealing water of the western districts at Lake Oberon). Bosworth Falls is worth a second look - at Bathurst are scarred trees from a burial? avenue that once stood at that place. It may be that other falls of the Wiradjuri may have once had similar memorials.
This is #7 in a series of Lost Falls of South Eastern Australia - the Index Page is here
Labels: Falls Lost Falls

Peter Quinton said…
Thanks Anonymous dreamer
While this has fallen off the maps, it is still very close to those who remember the old ways. There are many ways to loose something, but forgetting it was ever there is the mind killer.
Peter
Thursday, February 18, 2021 at 9:44:00 PM PST