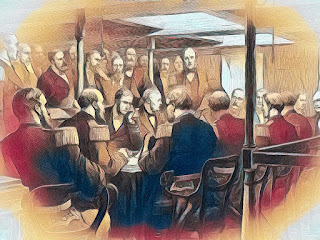 Back at the boathouse, Labrinth climbed the stairs to the bedroom and switched on the lights. David was lying close to where she had left him with Patroclus sitting on him.
“Good cat! Look what I have found!” she said, dropping the backpack with a flourish on the floor. She came and sat on the ground close to David.
Turning to him, she said, “No way could I have taken you up there. You do understand that?”
David glared at her.
Labrinth said, “Look, I can give you a choice. I can leave you here, in this timeline, with your wife, who seems to be... Well, I just do not understand what you saw in her, David. I do not think she is a lovely woman. I would not go out with her. Not in a million years. She wanted to send her brothers over to sort you out, even though I said you were delusional.”
This was not going well.
Labrinth tried another track, “As I was saying, I can leave you here with your wife and her brothers, or you can come to help me find your dad, who is probably not dead but may have gone off with Catalyst.”
She paused for a moment, and said, “Look, tying you up was maybe not the best option, and I know I promised I would not do it, but...”
She stopped, as she saw the tears in his eyes. Then she looked at the knots and wondered how she was going to untie them.

Dawn watched the Doctor leave and then walked back to Chas’s study.
The study was untouched since Chas disappeared. Dawn's eyes felt the pictures scattered on his desk and cabinets.
She reached up to switch off the light but then paused.
She remembered the man she lived with all these years. There had been lots of fun. Then there were the times he merely became lost. Good and bad, she would be there for him, smiling. They got through the bad times together. She blamed the Navy and would not tolerate any military paraphernalia in the house.
They had a routine when he got lost. They would sit together quietly until the emotion drained out of him. Then he would sit down with his pictures from the old days. And they would tell each other the stories associated with each. It sometimes took a while for him to recover but he always did.
Instead of switching off the light, she picked up the first picture. They were young. The photograph was of them at a fair in Adelaide.
She sat in his old seat and looked into the picture, wondering how things could have been different, and then she picked up his diary again.

3: Unedited minutes of Commission of Enquiry

Eyes Only: Evidence of Station Commander Benson
Senior Counsel for the Commission: You explained the circumstances leading to the retrieval of Agent Labrinth and the chaos that ensued. In your opinion, was this the proximate cause for all downstream events?
Benson: Yes Sir. That is my evidence.
Counsel: You have not speculated about the third being that materialized at your facility.
Benson: I did not see the third being and cannot explain its appearance.
Counsel: And yet, you offer it as the proximate cause for the power fluctuations which led to the disastrous launch of Trident 64 and the nuclear conflagration at North Perth.
Benson: Yes Sir. That is my evidence.
Counsel: I put it to you that the real cause of the launch was your determination to pursue recovery of the child, against the advice of your specialists.
Benson makes an inaudible response.
Counsel: Speak up, please.
Benson: I was not responsible for the launch of Trident 64. The Commission needs to question the managers of that facility to determine how a minor power fluctuation led to the catastrophe. And while you are at it, ask Treasury who ordered the connection of the nuclear reactor to the grid in the first place.
Commissioner: You have been warned previously about any reference to the reactor in this place. Clerk, strike that reference. Benson, do not test my patience further.

(Image: reworked from an original lithograph of the 1851 court-martial of my Great Great Grandfather at Hamoaze on board the HMS Impregnable.)