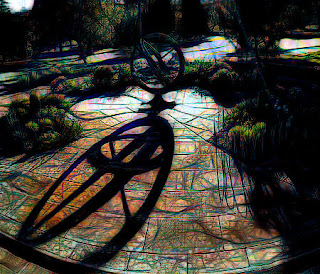 In January 2015 Catalyst had arrived at Nowra uninvited and, if truth be told, unwanted.

Chas was very wary of him. Perhaps unconsciously, when they were alone, he called him Catalyst rather than by his real name.

Catalyst explained why he had come. He said, “I think we are running out of time. I have some ideas, but I need your help.”

“You have had almost forty years to get in touch. Why now?” countered Chas.

“We are not supposed to live like this. I want a normal life. I think I know how. Tell me what happened to the base.”

Chas shrugged, “After the crisis, we had to shut the base down quickly. We only had a couple of days; power overloads and fire had damaged the base. There was not enough time to shut the reactor down, so we put it into hibernation mode. Benedict pulled Labrinth back and sealed the station. You know your artifact stopped transmitting?”

“ Dead,” Catalyst threw it onto the pool table.

Chas picked it up, and said, “We never recovered your signal. I wonder why it stopped transmitting.”

Chas said, “We pushed the desert sands over the base. It is still there, for those who know where to look but they bulldozed a fake road and site - probably what you ended up at when you went back. The team was debriefed and broken up overnight. Benedict took the rap with the Commission of Enquiry.”

He paused and said, quietly, “Labrinth’s artifact is stored at the base. She was picked up by two Foreign Affairs agents during the shutdown. I only heard about it the day after. They took her at night and just disappeared.”

“There were rumors of a bad car accident. People say she died in it. I tried to follow it up. But then I got pulled into helping with the relief efforts in North Perth. Then I spent a couple of years being questioned about the program. But, by the end, no one believed in it anymore anyway, it was treated as a joke, like the Scramjet, and I got no leads on Labrinth.”

They sat eating nuts and playing darts, trying to put the pieces together. The farm cat Patroclus, sat at the table watching the darts fly through the air with interest.

Chas shot a look at Patroclus and said to Catalyst, “But I still believed.”

Catalyst could see the tears in the old man’s eyes, and said: “Because of the time quakes?”

Chas said, “Yes. If it were not for Dawn, I would have gone mad. Or madder than I am now.”

Catalyst smiled grimly, “I guess we are probably both a bit mad. Those quakes were insane. Who else from the station command can we find?”

Chas was quiet. He said, “I know how to find those still living. Except for Labrinth...”

“Stop it, Chas.” Catalyst said. “I have a theory about what went wrong.”

Chas took a moment, using highly descriptive language, to tell Catalyst what he thought of theories.

“Hear me out, Chas. Tell me about your very first-time travel attempt.”

“It was straightforward. I went into the future and came back a second later. While...”

“Stop there. Right there. That is what went wrong.”

“You were never brought back. For the circle to be completed, you would have had to have been brought back to the moment you left, not one second later.”

He let Chas digest this for a moment.

Chas looked at the ceiling, trying to make sense of it all. Patroclus saw his chance. He jumped onto the dartboard bringing it crashing down.

Chas thought about that while they cleaned up the mess. He said, “Is that even possible? So, if I was never brought back, where am I? Where are you? What date has the real future moved to?”

“We are in your house outside Nowra drinking beer, and I was beating you at darts until you set the cat onto the board. The probability cloud is just as real to us as reality. It can kill us. It might eventually become real to everyone else. But, at the moment, we are only traveling along the path of the most probable future. I call it a temporal probability cloud. When one of us sends back information to Mission Control, the changes get promulgated through the temporal probability cloud. All the small changes, the butterflies that beat a couple of seconds later than before, add up and we feel the changes as a time quake.”

Catalyst can hear the restraint in Chas’s voice, “I need to think about this carefully. But let me get this straight. Are you saying that if we send each of us back to the exact moment we first left, we get out to live our real lives? A proper life, not some unreal half-life? Will we remember what happened here? Wait, can we fix things? Can we make things better?”

“I hope so,” Catalyst smiled. “I have memorized every winner for the Melbourne Cup for the last 39 years.”

“If you are right, there is one other real traveler with us. Labrinth was, is, in the same situation. She was also briefed to try a time grab with another person as well,” Chas is starting to think.

“Look, I do not want you to take this the wrong way, but we need to be completely honest with each other. Benedict and I talked about sending her into the future to try to grab you back. We were going to try it on a third person first.”

“And if that did not work?”

Chas thought carefully about how to tell Catalyst the next bit, “It did work, a bit. She found someone. They came back together, holding each other, with some kind of demon fighting them. Sorry, that is the best description I can give, I was not prepared for anything like that, and then the world went to hell in a handbasket.”

“Whoa.” Catalyst did not usually use words like that but thought he could make an exception this once. They were both silent for a while.

“What sort of demon?”

“Don’t you know? You told Labrinth you had to deal with demons.”

“Well, we all have different demons. What did you see?”

“A ball of black energy, with fire and smoke. Labrinth was trying to tell me about it. It might be still here. If so, I have not seen it.”

Patroclus stretched out across the floor in front of the door, ready to ambush one of them.

Something was bothering Catalyst. He asked, “So Labrinth is coming to snatch me. When, and what happens if it does not work? Will she help us stop the time program?”

Chas shuffles his feet, “What you have served up to me is just a theory.”

Chas thought about the Labrinth he knew, full of life and fun. He said, “You and I have both changed in this life of probabilities and time quakes. She might change as well. She will take orders from me, but she is armed, and she is dangerous. And she sees you as a threat. But I can’t let her go back and get killed.”

“I am not sure you have been listening to me. If she gets killed, at the moment it only has happened in the temporal probability cloud. Real time has moved on since we entered the cloud, but we still have not got that far. How long have we got, before she arrives?”

“It is January now; she will arrive in May. So we have four months before she appears. I am not so sure about your thinking on Labrinth: she is real to me. I do not want her left in this limbo.”

“Look, I do not like the idea of someone trying to kill me.”

“So Labrinth and whoever she snatches will be in the same position as we are. All stuck in your cloud thing. We can’t leave them here.”

“Not the person she snatches… they didn’t start from real time.”

Catalyst confessed, “I have not thought that permutation through. But, speaking for myself, I think avoiding Labrinth is the real priority here. But, we have a lot to do before she becomes an issue.

“Another thing. We have been planning to make a change to time. Why hasn’t there been a time quake?

“If my theory is right, a quake is only generated when we generate a change in the real past.”

“I do not think that you are right about that. If your theory is correct, time changes are just as malleable within the cloud,” mumbled Chas thinking that he had a far more critical question: What was he going to tell Dawn?