On Sol (preamble, The Wolves of Ragnorok) 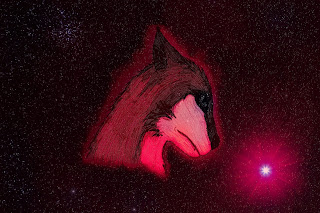 We all once knew that the sun is a two horse chariot. On Earth, a chariot is only justified in the interests of war and not for farming meadows or clearing bogs. A chariot is a machine used sparingly by princes of state in the armies of the steppes and the plains, far to our south.

The Norse knew that the goddess Sol stands in the sun chariot, guiding it through the stars.

In the predawn the two sky horses Árvakr and Alsviðr, “Early Awake” and “Very Quick” draw the chariot into darkness.  But in the dawn, their manes ignite just like molten lava from our volcanoes.

And then the chase recommences.  For Sol is being hunted across the sky by two wolves.  At Ragnorok, Sol will be taken and torn apart by Sköll.  The seers foretell that her gore will fall on Asgard.

But for now, the sky horses avoid the wolves by swiftly pulling the chariot across the sky; each day a slightly different path.

In summer, when the days are long, the wolves sorely test both Sol and Svalin.  Here on Earth the world heats.  But as winter draws near, Sol avoids the chase by taking a different path across the sky, and ice takes the world into its grip.  Very occasionally the wolves catch the chariot and we can see them dancing as an eclipse darkens the sky.

Originally the old tribes did not see the wolves.  They simply thought Sol grew brighter as her chariot came closer to her lover’s hearth.  Later Sol was perceived as having a bright and dark side, and day and night were conceived according to whether we saw her left or right side.  There was no talk of wolves or paths in the oldest stories pressed on sheets of metal.

So why now do the wolves pursue Sol? But these are not any wolves. These are children of the Iron Wood. But still we do not know what condemns Sol to track these dangerous paths nor why the wolves are intent on the pursuit.

In the absence of an answer, some presume that from the earliest time, the wolf pack through its nature will always simply pursue and kill when given the opportunity. But, perhaps we should not be so quick to sit in judgement.  Perhaps, we should listen to the wolves before we condemn.

Labels: Novel The Wolves of Ragnorok