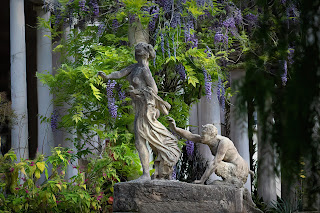 You have no reason to write to me, and in your silence, I feel your anger. I write to you, yet I hardly say a thing.

So, shall I write again, another letter full of platitudes? It would not be right to let your gift go without recognition. So let me give you a hearty 'thank you' for letting me stay in your empty houses, for your hospitality extended with such grace and form, and silence.

Or should I write to you of the past? That brief time when so much seemed to be so close; when your family proudly waved the flag of uncompromising revolution, when your husband and your daughter still walked the earth, and when you welcomed a young man from the country into your home through marriage. For me, that was a beginning. I came to share your dreams. Your loves.

Like you, I was angry with the way the world had become, and I was determined to help reshape it. But in learning the lexicon of the rhetorician, I became capable of believing in everything and nothing. I won arguments by the strength of voice, overlooking the reality that behind the case for change there was no real agenda, no economic plan, no concluded curricula of education, no road map of infrastructure building, no understanding of how to get things done differently. Just the hope that when we got there, someone else would work it out.

But I have not come here to talk about me.

Let us talk of kings and philosophies again, as once we did, next to the fountains of your city garden. Let us debate the rule that there can be no difference in quality between crimes; they are all equally obnoxious. But then, what of the offenses Nature caused to you and me? What penalty would we exact for the deaths of those dearest?

On the passing of your daughter, our tears mingled in the loss of the future and all our dreams. I know you cannot blame me for her loss. It is true; I have found another. For I must leave the past in the past: your daughter to her rest; and your husband in your heart.

But you know that.

You seek a different account. For although I speak kindly of the revolution, and while I count among my friends the few who survived, I have accepted appointments and honors from the state that you detest. I became the person who worked out what came next, plastering up the cracks, cementing the hegemony of your hated enemy. I still work with those who killed the revolution; those who consigned our dreams to the scrap heap of history.

In your faultless hospitality, you hate me for another reason.

Some say that love and hate are sides of the same coin, and that the depth of emotion both elicit can turn from day to night, joy to misery, with every new spin. Intuitively, we assume that they are quite different, while conceding the similarities in intensity and focus.

This piece is written in stead of the note full of platitudes by Pliny the Younger to the wealthy widow Pompeia Celerina. Pliny married her daughter. Sadly, Pliny and his wife became desperately ill early in the relationship and his wife died. Pliny suffered recurring illness during his working life, which may have been related. After this first marriage that ended so tragically, Pliny remarried (Calpurnia, perhaps a year after the death).

Pompeia's family was very wealthy. The family was associated with the Stoic Resistance which, under the accession of  the Emperor Vespasian, had dreams of a restored Republic. After the death of Vespasian and the short reign of a benevolent Titus, these dreams were brutally suppressed by Emperor Domitian (during Pliny's early career, partly through the efforts of Regulus, Pliny's legal opposition).

Sometimes letters cannot say what the writer and reader think. Pliny's 'real' letter to Pompeia Celerina is in fact 'just' a hearty 'thank you' for her silent agreement to him continuing to use the family villas with a brief excursion into the topic of domestic slavery. The letter is sometimes excluded from compilations of the letters because it appears formulaic and the Latin phrasing is ambiguous. Perhaps, the original text deliberately employs ambiguity to convey Pompeia's silence, and I have leveraged this aspect to write the sort of letter Pliny may have been thinking of, but could not write. I did consider framing this in a slightly different way, moving away from the letter format and framing the confrontation as a debate between Pliny and his scriba and lector (private secretary), the slave Encolpius or his wife Calpurnia - a little like the style used by the Argentinian essayist Jorge Luis Borges in Imaginary Cities.

I have used the word 'hate' here, but perhaps it is too sharp. It is more a case of: "you could have had all this wealth, had only my daughter lived and you had not betrayed my dream. You are welcome in my villas to remember this". To which Pliny may have said, "had I not let the dream go, I too would have been killed in Domitian's terror". On a personal note, despite the passage of 1900 years, I find my own 'abandonment' of ideal and taking up work for the Attorney-General to be difficult to rationalise (and, like Pliny, perhaps all too easy to ignore).

Image: The homestead of the Australian painter Lindsay.