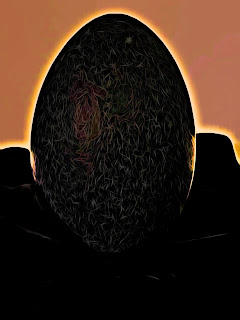 I looked across the abyss. There, in the distance were the gates to the lost city. Even from this distance, I could see the massive wooden doors set in a perfect stone mantle.

I backed away from the edge and turned to wave the rest of my party forward. But they were nowhere to be seen. In their place, there was an old man. Unexpectedly, it was the old Candle Maker, his wizened face carrying a long thin beard trailing almost to the ground.

I asked him if he had seen the rest of my party: Bruce the Bold, Graham the Furrier and Ivan the Dentist. He said we didn't need them and that he had sent them back to the inn.

I felt a chill in the air. Plus some disappointment because they had all seemed keen on getting some of the gold (especially Ivan). I didn't want to disappoint any of them, and, importantly, they all said that they would help carry the gold.

The Candle Maker said tersely, "We only need two." He looked at me, "Fewer people to divide."

I tried to ignore the latent ambiguity in the last response and instead asked if the Candle Maker was going to be able to carry some gold as well. He shook his head. I asked, "So, what are you going to do?"

He took a step back and calmly tore the mask away from his face and stepped out of the shapeless tunic. Where once an old man had stood, there was a woman. She said, resting her hand on a sharp sword hanging by her side, "I am going to protect us."

I took a deep breath, wondering what I needed protection from.

I told myself: Stay calm. Everything is going to work out all right.

On the way home, Ivan drove. The others were unusually quiet, trying to ignore the Candle Maker, the empty sack she had on her lap and her sword (which was relatively large compared to the car and which was cutting small holes in everything it touched.)

Finally, Bruce chanced the question which all of them desperately wanted to ask. He opened his mouth, and the Candle Maker snarled, so he shut it. The snarl had ugly undertones.

She looked meaningfully at Bruce and she swore, “Someone left the gate to Ancora Tu open and one of the dragons got out.”

Bruce shook his head vigorously and tried to point at Graham, the Furrier. Graham was not a furrier, and didn't even know any furriers, but had picked up that name on account of his hair (and the friends he hung out with).

Bruce stuttered, "I went back to the pub and drank beer. Like you told me." He added, a second too late, "Miss."

The Candle Maker glared at him a bit longer, and he added, "Stang and the local bikies can vouch for me."

Surprising, this didn't seem to improve his position, which deteriorated a moment later when a couple of bikies pulled in behind the car.

Bruce pointed at Graham again, "Ask Graham! He didn't come to the pub."

Graham shrunk from the Candle Maker as she swung towards him. Still, it was a pretty small car, not much bigger than a motorbike, and the shrinking was more symbolic than practical.

Still, the pause gave Graham a chance to work out a story. But when the time came to blurt it out, the story went to pot, "I got lost. I followed you up the old steps for a bit, but ran out of breath and stopped in a big clearing. I waited for you to come back."

Graham shook his head and, after reaching up to adjust his hair so he could look out, reached down into his jacket. He said, "You all think I stole the gold. I can prove I did not. I have no gold! All I got was this."

They all turned to watch, including Ivan, who should have been driving the car.

The Candle Maker gasped. A crack appeared on the surface of the egg, just as the car hit the gravel on the edge of the road.

Ivan slammed on the brakes, but the car slid off the road. The sword slid forward suddenly and buried itself deeply in the CD player on the dashboard of the car. The car screamed in agony, did an Olympic half turn and stopped hard against a very big tree.

There were beads of face sweat on Ivan, the Dentist. He was still not looking at the road.

Everyone in the car sat still for a moment. Graham’s hair fell back over his eyes. We all listened to the car’s audio system desperately trying to eject the sword.

Without apologizing for driving the car off the road, which would have been the polite and right thing to do in the circumstances, instead, Ivan pulled the keys out of the ignition. He jumped out of the car and disappeared into the ferns by the side of the road.

With a howl of anger, the Candle Maker shoved the others out of her way. She placed both her legs on the dashboard. With an angry face and muttering nasty things about dentists, she gripped the pommel of the sword. She strained to pull the sword from the dashboard.

The Candle Maker’s arm muscles bunched and glowed with sweat.

Helpfully, Bruce the Bold took the opportunity to suggest that Ivan may have left the gate to Ancora Tu open. The Candle Maker was groaning with the effort but took a moment to shoot him a glance which threatening to eat him.

Just then, Graham the Furrier gave a muffled shout. We all turned to look at him, or rather his hair. Even the Candle Maker stopped in mid-pull. Graham was holding the egg in front of where his eyes would normally have been, with both hands.

As we watched, the egg shuddered, and little cracks appeared all over the surface, a bit like when a stone hits your window screen. Suddenly, a bit fell off.

With a puff of smoke, a small beak poked out of the egg.

At the same time, the car gave one last convulsion and Bruce muttered one last incautious accusation, “Your sword killed Ivan’s car!”
*
The Bikies had pulled up a little back. With a display of coordination usually reserved for extremely dangerous situations, they surrounded the car from the safety of a rocky outcrop 100 paces away.
Stang arrived a little after the others, silently approving their caution. She dismounted from her black motorbike and momentarily put thoughts of the beach to one side. Her black steel-trimmed boots did not raise any dust. Sun rays hitting her found themselves unable to leave the surface of her black leathers. Stang did not leave a shadow. She stood, weighing the risks against the metal in her hands.
Inside the car, came the sounds of a heated debate.
The Candle Maker had stopped trying to pull the sword out of the dead car's audio system and was demanding that Graham give her the egg.
But Graham had decided to keep it for himself. He listened to a lot of animated movies and had formed a view of what was in the egg.
The Candle Maker said slowly, "You might not see it now, but you are taking a terrible risk. Holding that egg exposes us all to a lot of unnecessary danger."
Graham said, "It's just an egg.' The egg shivered, and he became excited, "My egg. I found it! This is the first sweet thing I have ever found." He shook his head, showering everyone with bits of stuff. Briefly, they saw his eyes, small and fiery, then his hair slid back over his face.
The Candle Maker took a different tack, asking conversationally, "What if it is a brown snake?"
Graham shook his hair harder.
The Candle Maker rapped it up a notch, "It could be one of those nasty suckers that jump out at you and go down your throat. Haven't you seen 'Alien'?"
Bruce murmured, "Looks like an emu egg to me."
In a moment of doubt, Graham insisted loudly, "No! It is a dragon egg. I heard the dragon."
One of the listening bikies gave a muffled gasp, and Stang hesitated for a second, growling out a curse at the Candle Maker. Then Stang strode forward. Her Black half-cape fluttered behind her, as she sped to a trot, to meet the threats within the car.
Stang reached the car and reached for the door handle. Quick as a flash, the Candle Maker reached over Graham and locked the car door. Then she gripped the sword with renewed vigor and gave another heave. Stang shook her head, braced herself and ripped the back door off its hinges.
Stang probably had another life and a different name once. But no-one could remember from where she had come. As for her real name, everyone forgot it on account of a disagreement she had had with the former head of the outlaw motorbike pack. After the disagreement, she had cleaned up the rest of them. Those who could not run away were made to wash and clean the clubhouse till it sparkled like bikes. Then she went and bought them all a better class of brewed beer and a scrabble board, and they spent the next couple of day making up stories about the events that everyone could live with. None of them dared tell her about her new name.
For the second time that day, Graham shook the hair out of his eyes and tried to scramble over the Candle Maker and her sword to the other side of the car.
The Candle Maker looked at Stang with a far-away look in her eyes and twitched her nose. With a puff, she turned into a mouse and raced out of the car. Graham stopped scrambling, looked over his shoulder at the little mouse and a dreamy look came into his eyes. He said, “Can I keep…”
Stang lifted her boot (black leather with the metal painted in matching black metallic paint with little black stars) and brought it down hard where the little mouse had been running. Dust rose from the ground around her boot.
Graham looked at Stang in disbelief.
He asked in a little voice, holding the egg close to his heart, “You don’t like mice?”
Labels: Short Story