Catalyst: Of the Nightfall (5) 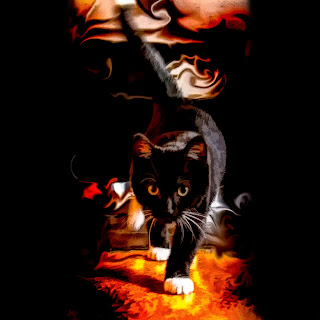 Catalyst crouched as the door closes behind him, locking him into the old operations room. He took a deep breath and, for the second time, looked at the remote dimly lit consoles around mission control. The time gate has a faint blue glow that appeared to pulse gently in time with the beat of the reactor.

There is silence all around, no sound nor sign of any danger. Last time he was here, he embarrassed himself by running from monitor lizards. Big monitor lizards he corrected. This time he is prepared. His eyes are already adjusted to the darkness, and he has a series of small surprises should the lizards get too close.

They agreed on radio silence unless there was trouble. His mission was simple, get to the engineering console and retrieve the artifact left there.

He sprang away from the wall and sprinted the 70 feet to the central console area. He crouched, his skin crawling with the feeling he was being watched. Inside the time gate, an outline is illuminated by faint blue light.

Her voice comes softly from all around him, “Do not attempt to use your radio, or it might end here right now for you.”

She whistles and there is scuffling in the distance, in every direction.

Catalyst asks, “Who are you?”

She says, “Call me your conscience. Come closer. The closer to the Elven Path, the safer you are.”

She says, “You call it the time gate. Come to me.”

He remembers the tracks he saw near the time gate last time he was here and counters, “There is a team of others outside, they will not let you get away.”

She laughs, “Your friends? The team of the elderly and the infirm? They cannot help you. Come to me, or you may get bitten. Quick.”

He moves through the outer consoles, muttering, “You do not sound that young yourself.”

She says “I am younger and older than you can imagine.”

He stops near the mission controller station, “Ok, I am listening to you? What do you want?”

She says, “You came here to collect an artifact. Go get it while you can.”

He frowns and turns back, starting a little when he sees some monitor lizards pacing in a circle close to the consoles. They are flicking their eyes and tongues at him. He does a quick search of the engineering console that was his target.

She says, “Your trinket is missing, eh? Well, perhaps I can help you. Come to me now.” Her image shimmers in the gate.

Reluctantly, he turns and looks closely at her. He can only see her silhouette, and it appears translucent. He asks, “Are you here?”

She says, “No, the Elven Path is dangerous.”

He asks, “Why do you call it the Elven Path?”

She says, “We teach our young that this is where the Come-By-Night roams and waits to steal your life away. But you know this. Your life was taken, eh.”

She says, “I first followed your heart line and remain as close as your heartbeat.” She laughs, “I have been listening to your plans from the very start. I know what is intended.”

Catalyst sighs, “I don’t think that the first part of the plan will work. It is the second I want to see success with.”

She says, “The second part of the plan, a return to the actual past, must never happen. You intend to change the real past. To improve it. To rapidly escalate technology uptake and to cure all society’s ills. Am I right? ”

He says, “Not me. Well, not beyond a little horse racing. But some of the others have plans, and why not? And why not try and bring the whole thing to an end before damage is done at all?”

She says sternly, “Because your presence will be catastrophic. For every positive you introduce two evils will arise in its place. But I understand that you will not simply accept my assurances that this is the case. Instead, you can witness it first-hand. Your own eyes will persuade you more than my words.” He says, “How do you know what will happen?”

She says, “It always happens. I have learned this myself, through trial and error. And while I value learning, my kin prefer biting.”

Catalyst casts a quick look over his shoulders.

He says softly, “Why shouldn’t I try to stop the program at the beginning? If I am hearing you right, we agree that the program is an abomination.”

She hisses, “Listen to me! It is too late to stop the program. That part of the temporal path is fixed. It is in the past and is not immutable. Playing within your probability cloud only affects the cloud. It is dangerous, it can hurt and it attracts undesired attention: but it changes nothing tangible.”

He asks, “So the gate can change the temporal future enough to assess wide scale changes, but they only become real when you change the present?

“And I will learn the same lessons that the old guys will if we carry through with the first part of the plan?”

She says, “When you return a time quake will give effect to the changes. The changes your friends intend are so great that you will be safe only if you stay inside the facility when the quake happens. But you must leave quickly because the facility will collapse after the quake.”

He says, “You are telling me to do nothing more than I was going to do. Why only show yourself to me?”

She says, “I may have appeared to others, but that is immaterial to you. You were stolen. You have more to lose than the others. You are likely to take the greatest risks. I need to persuade you.”

She says, “Wait. Listen to me. You need to make one small change to the first plan, or it will fail. Look at the time clocks.”

Catalyst turns from the time gate to the large mission control clocks, next to the dead screen. They are in partial darkness. The first clock is titled Mission Control, and has the date 10 November 1975 and shows an elapsed time of a little over 272 hours. The handpieces are frozen still. The second clock is titled Mission Control and has today’s date, 1 June 2015. It only has an hour hand, but it shows the present time and is slowly moving.

She says, “If you go back before real-time displayed on the Mission Control clock, all you can do is watch. There is one exception, which you have already guessed. If you are there at the instance you were first sent, you will merge, and your contribution to the temporal probability cloud will collapse. I am telling you this because you must avoid that at all costs. You may not believe me right now. You may wish it were otherwise, but you will learn the truth of what I say.”

Catalyst turns this over. He says, “The plan is to aim for T minus 3 hours after Chas’s first test. That is too early if what you say is correct.”

She says, “Yes. Your leader Benson chose a quiet, safe time to do the test run. It will not work. You will sit around watching, not being able to act. You cannot take that risk. You must be inserted back into the future, just ahead of the passage of the real-time wave to achieve your goal.” He asks, “So what do you intend I do?”

She says, “I am simply your conscience. You need to keep your eyes open. Look beyond the surface. Understand what is actually happening.”

He says, “And if I still want to return to the real present despite everything I see, what will stop me?”

She laughs at him, “I am watching you. To help you move in the right direction, I will now destroy this facility. I may fail. I may not stop you. But if you return, you will allow my kin entry into your world. That is an outcome you should avoid with every breath in your body.”

“I do not understand you.”

“You will. I have watched you. You want to know everything straight away. Some things are to be learned slowly. You are about to learn why you cannot go home.”

“But you have not told me who you are or where you are from.”

“Pray you never have answers to those questions. Pray you never look on all those who are lost in the cloud looking for a way back to the present.”

She starts, “I cannot stay here any longer. Here, you were looking for this.”

She holds the artifact to him as she fades.

It falls to the ground and the time gate fades to a dull gray. He hears the sounds of rocks tumbling near the old roof fall and flicks on his lamp. The lizards have turned to look at the rock fall. Catalyst reaches down and takes the artifact.

He hears a whistle and turns his lamp to see most of the monitor lizards turn and run into the distance. One of the larger monitors swings back towards him.

He flicks his radio on, “Catalyst here. I have the artifact. Am about to...”

There are an explosion and a scream of metal from the roof near the collapsed part of the facility. He hears the reactor beneath him start to pulse with higher intensity. As he plays his lamp light over the far walls, he sees a section of concrete wall bulge in and then shatter as the roof begins to collapse. The radio blares, “Benson here, what was that!”

Catalyst starts, as something rubs up against his leg and quietly growls. He looks down, to see a cat.

He turns, lost and searching for the way to safety. But the cat beats him to it, charges confidently towards the wall, calling Catalyst to follow.

He flicks his radio on talking as he runs following the cat, “Catalyst here. Open the door and get down to the lower level, the facility might be collapsing!”

A cloud of concrete dust sweeps over him plunging him into near blindness. Just the faint outline of the cat in front of him. He yells at the cat, “Go back to her. You cannot come with me...”

Over the sound of the collapse, she says, “He is called Wind. He will protect you. Take care...”

He reaches down and scoops up the cat and turns his shoulder to hit the door.

Everything is moving slowly. Too slowly. Dust from the collapsing level above them has overloaded the air-conditioners, and fine dust is starting to filter into the base.