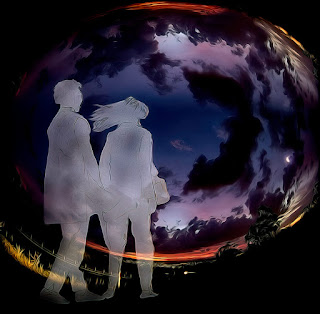 Labrinth and David touched the stars and then fell back to Earth.

They emerged a little above ground, landing lightly where they started. David's arms were still around her. Raindrops hit their faces.

A second later, toward the bay, a flash as a star appeared in the sky. A black clawing mass materialized where the star was, and a pressure wave sweeps in a sphere away from it. A split second later the mass became Patroclus. He landed on four feet and then wasted no time heading for the boathouse.

David let out a sigh and held Labrinth even closer. Neither moved. The day is overcast, a stark contrast with the bay as they had left it a minute earlier. A storm is brewing off-shore. They hear rain softly drumming on the boathouse roof and their bodies, the thunder of surf in the distance, and see flashes of lightning out to sea. The three float planes have been run up onto the beach and are battened down.

“Stay for a moment,” David said. “I will fall if you move. That was a picture of us on their screens, right?”

Labrinth said, “Yes. They are probably watching us now. Wait.”

She keyed the transport artifact and, noting that both receive and transmit lights were green, sending the safe arrival confirmation.

She paused, “Is there somewhere we can leave these. Maybe away from your house?”

“What?” he paused for a moment, “I am sorry. My head is a jumble. I do not know what just happened. A safe place? Yes, Dad has a secure lockup on the float plane wharf. We can leave it there for a couple of hours while you work out what you want to do.”

She settled back into his arms, feeling her shoulders against his chest, “Ok, we can work that out together.”

She reached down and took off her shoes. She shook the raindrops off her, “Come on.”

They walked together, hand in hand, to the pier, “Patroclus scratched you. Have you got antiseptic and a plastic bandage back at the boathouse?”

“No one uses that stuff anymore; I will use some spray on skin.” She bit her tongue.

They arrived at the lockup, an old chest with an electronic lock. David opened it and pushed some emergency vests to one side. He fished out an old backpack, “My dad keeps some memorabilia from the Navy here. Mum will not let him keep it in the house.”

He took out an old box with a faded symbol of a flying raptor, writing round it indecipherable. “It will be safe in here; this never gets touched.”

She took the artifact off her neck, looked at it and tried toggling the two receive and send switches.

She looked up at him, puzzled, “The lights on the artifact are dead.”

“But you used it a moment ago. Was it working then?”

“Yes. These circuit lights should both light up if I toggle these, green or red. They are both dead.”

“Nothing obvious, like batteries? Here, let me give it a bang on the side of the pier.”

“No! No, the batteries should be good for a year.”

“Maybe it just needs a break from me.” She punched him, gently, “We might be out of the line of sight, or there might be some interference.”

She dropped the artifact into the backpack and then reached into her coat and pulled out the revolver, “This would probably be better here as well.”

She thought for a moment, then reached down and unstrapped a hunting knife from her ankle, “Maybe this too.”

She felt an involuntary shiver pass through him, and said, in a calm voice, “Look, you are completely safe around me. I am a weapons specialist.”

“Anything else to declare?”

She looks at her feet and then nods. She takes off a ring, and passes it to him, “I wore it on base. It stopped questions.”

“Maybe you should keep it, for show.”

“Why? Is there cyanide in it?”

She looked up at him with big eyes, “Do you want to know?”

He put all the gear back into the lockup, and they walked back down onto the grass. “You were joking about the cyanide. Right?”

She said, straight-faced, “No.”

But her eyes were smiling and then she laughed. So David placed his arm around her waist and reached down and picked her legs into the air, balancing her in front of him as he walked past the three tethered float planes towards the boathouse.

She said, this time smiling with her teeth, “What are you doing?”

“You promised to tell me your date of birth.”

He carries her a few more steps and says, “Especially now I have seen you early in the morning.”

She kicks her legs from his hand and twists in his wet grip, repositioning her legs around his waist, their rain compromised clothing skew-whiff.

“Hey, I believe you, girl from the past. I will follow you to hell and back. I promised.”

She held him tightly bringing him to a stop, “I don’t want to be dazzled by fancy talk or magic. I am happy we found each other. This kiss is my gift to you.”

She looked into his eyes and kissed his wet forehead. A flash of light lit up the sky, and a rumble traveled through the ground. A mild earthquake, gone as quickly as it came.

She shook her head. “The kiss was me. The tremor was something else. Do you get these here often?”

“Never. Maybe something to do with the storm or the train line. We could go shopping and get you a wetsuit for surfing, but I don’t think we are going to be swimming today. Probably an indoor day.”

“I am not sure about that. Quakes can change things. Well, maybe we can get warm and start working. After decontamination.”

She gave him another hug, her mind running forward to steam, tickling, laughter and running out of hot water. She let go gently and slipped to the ground. She looked to see him smiling, and a little confused.

“Are they dangerous? Just that I see one right here!” He reached down to her bottom ribs and tickled her. She shrieked and chased him the rest of the way to the boathouse.

As David opened the boathouse, Patroclus dashed inside under their feet, almost tripping them. David ignored his ringing phone. Instead, he turned to her, “So do I call you Labrinth or Stephanie?”

As they climbed the stairs he persisted, playfully, “I want assurance. The first time you tied me up, and next time you almost got my cat ate.”

“I will not tie you up ever again. Scouts honor.”

The bedroom was dark, the flat master bed under high wooden ceilings, screens and sound equipment centered on it. Through the old slate roof, the faint sound of the drumming of rain and the thunder of surf. Patroclus was cleaning himself on the bottom of the bed.

The room had a faint unfamiliar smell she had not caught the evening before. Perhaps David’s mom had come over and changed the bedding.

He asked, “How warm did you say the shower has to be?”

Patroclus jumped and hissed at the stairs.

A moment later, someone knocked at the boathouse door. The knocking became louder, and a strange woman’s voice carried through the house, “David! Let me in! Where have you been? Why aren’t you answering your phone?”

In the darkness, David’s face turns red, and he whispers to Labrinth, “I am sorry. I told you about my ex-girlfriend, Mary...”

He shook his head, shouting back, “You never come here.”

“Whatever,” Labrinth said to herself.

He walked down the stairs, “Mary, what are you doing? I do not appreciate this!”

From outside, Mary gasped and then became deadly serious, “What do you mean? You have no right to treat your wife like this. This is my house too. Let me in, now!”

David shook his head, “Are you mad?”

Mary let out a shout, “This is the last time you do this to me. I am sick of your drinking and carrying on. I will be up with your mother when you come to your senses.”

David said, “No. I do not want you at my parent’s place. I plan to have dinner with Mom and Dad tonight with a friend. I do not want to draw them into our fight. Our old fight. It is over.”

Mary said, “David, what are you saying? Your father is dead. You are not making sense. I am going!”

David was physically shaking. He half collapsed on the bedroom stairs, tears streaming down his face.

“David? Has she gone?” Labrinth asked.

“I think so. I have to stop Mary from going to my parents.”

“David, she said you are married to her.”

“Never!” his voice dropped, “We are not married. I wanted to, once. Mary did not. She left me for Ron. She has been turning the knife ever since.”

“David, I believe you. But she also said your Dad was dead. We met him this morning, right? Those are his float planes, right?”

“Yes, she is completely unhinged. Dad runs a small tourist charter operation. Look, I better go up to the main house, make sure she is not upsetting my parents.”

But Labrinth was not looking at him anymore. She had come down the stairs and was looking outside through the picture windows, at the beach. There were only two floatplanes, both under heavy tarpaulins, high on the beach almost out of sight. There was no sign of the third yellow two winged float plane.

“David, there is something wrong outside. The quake changed the timeline.”

David asked, “What do you mean?”

Worse was to come. The pier they had stood on moments before was gone. In its place was a collection of old docks, the surf breaking on them. There was no sign of the pier or the lockup.

Labrinth said, “Something is very wrong!” Then she told herself, “There are too many coincidences here. All bets are off.”

Later, upstairs, she kicked off her clothes and took a shower anyway. She needed some quiet time to think.

David, tied up tightly with torn bed sheets, glared at her but kept his thoughts to himself. Patroclus made a nest at the bottom of the bed and waited.