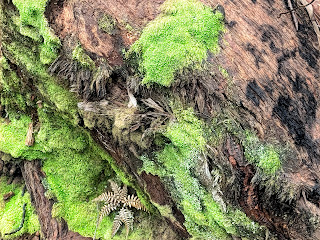 The First People told many stories around fires as they watched embers fly into the sky. Some were 'puzzle stories.' This one speaks of an enchanted stream.

"Two strangers agreed to climb a steep mountain, but they disagreed about the path. The older could not persuade the younger, so they took different directions. The young always think that they know better than the old.

The path became very steep and full of loose stones: little more than the track of an old waterfall. Worn out by the ascent and the heat of the sun, the older became weary. The older considered giving up a couple of times, but the thought of descending was even more terrifying. Then, finally, the sun started to set. A kookaburra's laughter drew the older to a place where the water gushed out of the mountain into a small ledge pool. The water was crystal clear and cold, and the older lay on the edge of the pool, drank deep, and then rolled under an overhang to sleep deep.

Waking in the middle of the night, the stars illuminated the water. A thrill of youth ran through the older. Shouting in pleasure, the older heard the echo return in the voice of the young. Gazing into the pool, the older saw youth rejoicing. Finally, the older jumped, spreading arms high, but returned to the earth young and feeling as the tree ancestor must have first felt when starting the climb."

I try each Cooroobun stream but have not found this one, yet. So I continue the search.

However, I have discovered giants beyond age on the escarpment edge that survived the firestorm and now prosper.
.