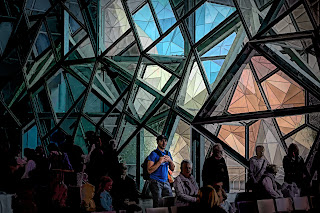 We landed on the surface of a salt lake. The dry heat of the desert sucked the breath out of me.

Cannonball took off his helmet and was looking at me swearing quietly. Eventually, he calmed down and told me that we had been transferred an hour into the future. I was vaguely pleased that I was now a bona fide time traveler, but he said that everyone would eventually make to this point and it was not all that special.

I asked him what the point of traveling an hour into the future was, and he said, “Small steps, son. Small steps.”

He told me that we would be returned to Mission Control in an hour and we then walked back to where he had parked his plane. We sat in the shade of a wing. He explained that the couple of seconds he had disappeared in the time gate amounted to about an hour out here in the desert, because of the temporal velocity we had been given to travel.

He made me look at the device, which he called an artifact. Initially, the artifact was dead. He swore softly and banged it against the airplane, and the lights came on. He gave me a quick lesson about the controls. He explained that it was used to provide a point at which temporal velocity could be applied or withdrawn, but also served as a communications device. Then we sat back and waited to be recovered, talking about life in the town, and the other bases I had seen. After about 40 minutes both our artifacts buzzed.

“Meet you back in the past,” he said. But we never did. He disappeared, but my artifact didn’t work. It was dead again. I tried banging it against the plane, but the lights did not come back on.

I sat in the heat a little longer, but the thrill of being in the future had worn off. In fact, everything seemed the same, so I started the long hike back home.

I got lucky and hitched a ride on a jeep at the bottom of the facility.

The excitement of the next few days completely overtook my adventure in the desert. The town’s power supply failed catastrophically, creating mayhem in all of the facilities, and then news came of the fall of the Whitlam Government. For a while, there was talk of revolution and civil war

My adventure in time might not have happened at all, except I still had the artifact. They did not get in touch after all.

So, I went looking for them. I managed to cadge a lift out to the temporal site. There was nothing left to see. The site was gone. Just a couple of massive concrete slabs. There were no buildings.

My family remained in Woomera for another couple of months, before dad was transferred. I threw the artifact into a box full of unmade model airplanes and forgot about it for nearly four months. I dug it out when I started to prepare to go to university. The power had drained from the artifact.

It took a little while, but eventually, I worked out how to power it back up.

When it restarted, I received a stream of messages from Mission Control. I thought it was a joke at first. But then they gave me a code name, access to a bank account and told me I was on their books as an employee.

They gave me a couple of jobs to do. By that time, I was going to university in Canberra, living in a shared flat in one of the leafy suburbs with five other students. Money coming out of the past seemed almost too good to be true.

Mission Control asked for strange things, checking old newspapers for results of horse races and winning lottery ticket numbers. I sent them back. A day after I posted the information I experienced my first-time quake. A flash in the sky, and a rumble all around me. Things changed.

Each time a quake hit, things changed. Sometimes they were not noticeable for days. My lecturers started to shake their heads, I was studying modern politics at the time but, try as I might, and I just couldn’t get it right. I would make obvious errors like who was prime minister or president. Except they were not errors. Things were changing. So I switched to something more tangible and took up the study and then teaching medieval history. I stopped watching the news.

For the first ten years, I kept sending back the information they wanted. Well, that information I could collect. I could not get access to “advanced weapons research” and information about “relevant political information for the end of 1975” kept changing, sometimes catastrophically.

Mission Control kept in touch with specific messages, telling me that in that ten year period only three days had elapsed at Mission Control.

While their desire for information was insatiable and they could send me lots of messages, I could only send them tightly condensed replies.

But each time I posted information, I would get another time quake.

Some of the quakes changed things for the better. But just as often they would get worse.

Then one quake almost killed me. A building I was in disappeared. I only fell a couple of meters, but it was enough to put me in hospital.

I started to rethink the whole “sending information back to the past” idea.