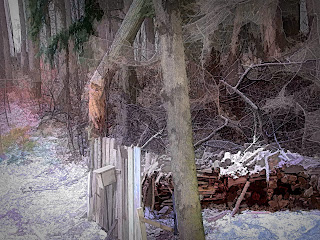 Imagine the deserted stead of the Dark Aelf. An ancient house sits forgotten atop a hill in an old orchard, close to the woods. At the bottom of the hill a snow bound path drifts to a small town.

The mists rise and in the distance an owl calls. In the distance, the monks are singing their early service against the dark.

The mouser Tiger stands frozen watch just like her ancestors, the original Norwegian war cats. The Vikings are said to have brought Maine Coon Cats, originally the forest Skogkatts, to Massachusetts a millenium earlier.

From a distance, white against the snow, Quappala, watches Tiger with growing apprehension.

Quappala is a trapper. Like his ancestors, the dogs and cats of the Nimacook Indians, he hunts squirrels and woodchucks through the shadows of the leaf litter of the forest floor. He refuses to learn the language of the Boston cats, calling them “Chewatch” (in the tongue once understood by bobcat and raccoon – “those that blew in from the East”). Like the Nimacook, he can speak a little French, and so can argue with Tiger, in a fashion.

Tiger will not accept his counsel. She once told Quappala where Cats came from.

Quappala was sprawled atop the wood pile next to the New England barn.

Quappala counted his descent from the hunting cats of the Nimacook Indians. He was enjoying the filtered sun; his eyes half open hoping for a squirrel.

Tiger, sat uncomfortably at the bottom of the pile trying not to get bark and dust tangled in her fur.

She spoke in their common language, French, with a Canadian slur.

Tiger told how her ancestors came from the B’stt, a joyful race of long lived shape-changing entities from a far world. Quappala dozed through the details, expecting nothing less of Tiger: another fanciful tale about miracles and nonsense. As for nine lives, Quappala treasured his life. He had no time for experiments with the divine.

Then Tiger dived deeper into the story and Quappala pricked up his ears. She told him that B’stt genetic coding provides the core of the dragon form, and when you look into the eye of a dragon, you see the original B’stt hunter. When you stare into the eye of a hunter, you risk all. You become the target.

Because of the hostile reaction, it is best not to look into the eye of B’stt, cat or Dragon. Quappala turned and looked at her with both eyes, as though she had turned a key.

She tossed her head and continued unaware. Once enraged, a B’stt will kill until her heart is sated, or swirl in dance until exhausted. Only immersion in a pool of water will cool the rage. She said that the ancients knew about the B’stt. In the old days, temples to the B’stt were surrounded by water for that purpose.

Quappala weighed up the words. He remembered a bobcat falling off a branch and into water, its blood rage instantly extinguished, and he started to laugh.

He laughed so much his form shimmered, and for a moment he unrolled into bobcat, Nimacook shaman, B’stt and cat. He fell from his perch onto Tiger.

Tiger hissed and took great offense. She said in a huff as she stalked back to the farm house, “I don’t know why I bother telling you the old stories.”

Quappala stopped his laughter and resumed his life form coherence.

He said to her retreating back, “Because I am real” and then, too late, regretted the thought.

So now Tiger crouches alone, waiting for the approaching storm.

She cannot face the approaching shambles alone. Still, she hesitates.

Soft light falls through the window onto the open book. The calfskin covering it has dried and begun to crack, scattering browning at the outer edges of the boards. The title on the spine is fading – a translation of the letters of the younger Pliny. A small piece of shot from a past accident is lodged below the title, buried just below the surface. The pages are lightly browned, delicate tracery from a long dead worm is in a lower margin avoiding the printed words, which dance on the page, as sharp and distinct as the day the book was printed.

Tiger shimmers in the light, alone. Low thunder rumbles in the distance.

She steps from cat to human form and reaches out to the book.

She whispers, “Come, travel to my home.”

Static electricity jumps from her hand as lightning crackles outside. Light sweeping into the house, illuminating the darkest recesses.

Mousers turn from all points to answer her call, bounding across space and time towards Tiger. As they come, they grow, filling human forms.

But Quappala knows such a summons is not free from risk. And in the dark, a dozen eyes turned to make the same journey. 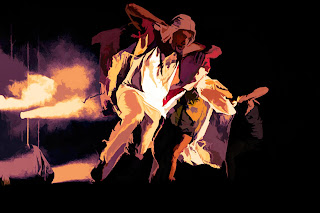 Tiger, Rowdy, and Nigel have been preparing for war, but they are about to get one they have not anticipated.

The old house sits in a forgotten orchard, closer to the woods than the little town. This week, the little utility hut that stores the wood ax and a couple of old chisels has fallen to their foes. Unfriendly faces have been active on the woodpiles and may have a foothold in the cellar.

Tiger and Rowdy own the farmhouse and view the developments as a direct attack on their land values. They seldom leave the house to go to the woods or the town.  They are not outdoor cats.  They are purebred Maine Coon Cats, although, as Tiger is fond of pointing out, they are much bigger than most dogs.

Coming from Boston, Tiger and Rowdy are also more educated than the other animals that live in the area. They subscribe to the most respectable news services, who have informed them of the Enemy's existence, the threat the Enemy poses to cats like them and their way of life, and the future of cat-kind and cat-culture generally.

Tiger and Rowdy have cultivated and refined tastes, enjoying the benefits of country living with few disadvantages.  Tiger prefers to tell City folk that she would not lower herself to work the farm. Instead, she maintains the farm as a retreat from the complications and chaos of modern city life.  That was until the war changed everything.

Despite his name, Rowdy is a gentle giant.  A very thoughtful cat, he spends much of his time lost deep in thought in the Western study, eyes half shut.  To keep up his strength, he eats regularly and well.  He undertakes a daily patrol around each of the farmhouse windows, and it is he that brought back news about the loss of the utility shed and movements in the woodpile.  His comfortable disposition and philosophical bent might just be a mask. However, he fears that the Enemy tells their troops he is lazy and fat, so he has recently taken to sharpening his front claws on wood panels in public view.

When not worrying about the slow, steady onslaught of the Enemy, Tiger devotes her waking time to overseeing the work of the less fortunate around the farm.  She counts amongst her descendants the cats that once lived in Queen Marie Antoinette's court. At the height of the French revolution, the Queen entrusted her beloved cat friends to Captain Clough to smuggle them out of France on the ship Sally.  Alas, Marie Antoinette was beheaded, but Captain Clough escaped to America.  Today her soft meows, trills, and chirps (some lightly touched by a French accent) can be heard quietly encouraging someone to try harder. If there indeed were an Enemy, it would surely fear Tiger far more than Rowdy and blame her for starting and continuing the war.

Nigel also lives at the farm, although some call him Austin.  Nigel has issues.  Perhaps a little too purebred, Austin is in a perpetual state of anxiety.  And their frequent name changes are confusing. The cause of the stress is unclear, although they were pretty withdrawn from their teenage years. The war is now a contributing factor.  Austin spends much of each day finding new places to hide. Nigel can not decide whether there is an Enemy or whether the current threat is just vermin. Fearing the worse, they prepare against the day when the darkness finally overruns the farm's defenses and imposes a new order.  In her gentle manner, Tiger has tried to encourage Austin with stirring stories about the old days before the war, while Rowdy has occasionally boxed their ears.  Neither helps much.

Life in the old farmhouse proceeds slowly, following Tiger and Rowdy's every wish, although they sometimes have to whip the servants out of bed in the cold morning of winter.  Despite the war, life must go on, meals eaten, naps napped.

Behind the scenes, the vermin blame the Maine Coon Cats for escalating tensions and a .list of atrocities, but the reason given depends on where the animal is on the food chain.

The ants and mice fear Austin the most.  These timid creatures assail the farm in the most inaccessible places, which unfortunately also seem to be those very places Nigel tries hiding.  Austin does not hurt either ant or mouse out of any wish to be cruel. Instead, the deaths that inevitably accompany the occasional meeting of mouse and cat can be attributable to anxiety.

The rats, squirrels, and chipmunks fear Rowdy and Tiger.  As educated cats, they insist on trial before punishment, albeit in a military tribunal.  These trials are often accompanied by pricking and taking of confessions, akin to the old witch hunters that infested the area.  They can often take some time to complete and seldom end in an acquittal.

Quappala, who does not subscribe to any news services and relies on his observations, shoots home the blame squarely to Tiger.  The tension is all in Tiger's head.  He says that she has confused the stories of the French Revolution with her present circumstances and that the vermin assailing the house are only seeking temporary refuge from the winter.  If Tiger's Enemy cannot take sanctuary, Quappala fears his food supply might be compromised.

Unbeknownst to all, Nigel's excavations below the old laundry have stirred an ancient evil. One that will put all our lives in jeopardy.

[Skogkatts was started a decade ago and i will post bits as i find them.]