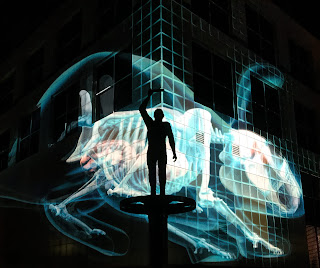 At Deep Space Station 41 on the shores of Island Lagoon. The base is experiencing typical spring weather.

Three men were walking, their shirts and shorts whipped by a hot, gritty wind. The wind howled through the desert preventing any civil conversation. They started the short trek southwards towards Mission Control; all faces twisted left, to avoid the bite of the wind.

The younger man, Chas, stops and turns into the wind checking his bi-plane shielded from the weather in a bay on the blinding white salt lake below.

The older men, Mission Controller Benson and the incoming DelCon director, Brent, pause for a moment to allow Chas to catch up. They trudge along the line of an old creek bed, taking what cover they can from the edge of small dark desert bushes that cling to the memory of the stream. At the bottom the depression they do the final slight climb the hard ochre surface of the wilderness to the mild depression which once held a small highland lake.

They enter through a small door set into the wall of the dome, go along a narrow corridor and then past a flat concrete blast wall, into the cavernous mission control. While blazing hot outside, the building is in darkness and there is a hint of a cool breeze ahead.

After the blast wall, they stepped onto the metal grid floor, the reactor below them vibrating with regular soft pulses.

In the center of the dome, dozens of consoles and screens were lit in a pool of lights and surrounded by the murmur of voices.

Benson catches his breath and turns to Brent, “Here it is. Welcome to Mission Control.”

Brent counted about 50 people standing or sitting in the central area. Large consoles crowded the central area with cables flowing over the ground to an outer layer of transformers and other equipment in a large semicircle around a staging area to one side of the center of the dome.

A large screen in grainy black and white tones hangs from chains ascending into the darkness of the dome above the left side of a staging area. On the other side, casting soft blue waves of light over the entire area is the time gate. Two large clocks with dates and some big stopwatches complete the scene.

Benson says, “As you know, most of the teams are pretty small, except for Guidance. It has six maths teams, doing the advanced calculus for telemetry. They are located in Woomera, ten people in each maths group, working in 6-hour shifts.”

Benson calls for Grant and introduces him to Brent. Brent says, “I have heard good things about you; I am lucky to have a bloke like you on the ground.”

While Benson deals with an interruption, Brent asks quietly, “Tell me why we are still using math teams? In my experience, they end up sitting around playing cards or calculating probabilities on horse races back home.”

Grant points down at the floor, and says, “I don’t want to alarm you, and the reactor is shielded, but new-fangled gadgets have a pretty poor time of it. We have a couple of calculators for adding and subtracting, but the real math demands of this facility are complex and keep changing. None of the off-the-shelf devices give us the flexibility of a math team.”

Brent nods, “I guess math teams have been the mainstay of Woomera from the beginning.”

Grant snorts, “Can’t see them being replaced in my lifetime.”

Brent agrees, “You are probably right.”

Benson turns to them with an apology and Brent nods, “Ok, I better start earning my crust.”

Benson and Chas walk to the mission control station, situated a little higher than the other stations and close to the time gate. Chas says, “He seems sensible; I wonder how those two will get on.”

“I wish we had some of these people at the start, rather than now,” Benson shakes his head and takes the microphone from the night backup. “Commander Benson taking the com. Our last specialist director has touched down, and I suggest you give him a welcome when you get the chance.” He pauses, allowing the chatter to die back down. “By my count, that makes this base fully operational. We will commence our first temporal tests tomorrow, first thing. I want all of you to get a good night’s sleep because once we start, sleep is the last thing any of us will get.”

At the DelCon consoles, Brent turned to Grant, “I am going to be on a steep learning curve here.”

Grant says. “You will be okay. We have the best people here, particularly Chas, that is, Cannonball. Cannonball is ex-Navy, air wing. He is a good asset.”

“The briefing I had on my way here made our task as clear as mud. Tell me how you see what DelCon does. We have a team of analysts, but our primary job is to stitch the other specialists together. What is the routine?”

Grant smiled, “Your team is ready. We are learning as we go along. Ok, the basics first. During set up we experimented with a couple of different shifts periods: during operational periods it looks like being 6 hours on and six off. By the way, we have reopened some of the fallout shelters at the base of the silo next to the reactor. We can sleep there rather than doing the long walk. I will take you down later and show you around. We have a backup operations room down there as well.”

He points to the consoles, “These work pretty much as you would expect, duplicating some of the telemetries from the other stations and giving us phone contact with our analysts. They are heavily shielded.”

“The clocks are a bit different,” he points to the big clocks hanging near the time gate. “In practice, I stay focused on those two 24 hours’ clocks. The first one is the time here in Mission Control. You can set your watch by it. Note, we call our seconds here ‘ticks,’” he waits for Brent.

Brent looked at the clock, the second’s hand slowly sweeping around the clock, like any 24-hour clock. The date in the center of the clock was set on 29 October 1975. He nodded.

Brent says, “I read that in the briefing. It didn’t make any sense to me.”

Grant says grimly, “It will. The second clock just has an hour hand. Give me a moment, I have had a demo prepared for you.”

Grant signals a technician sitting in Engineering. “Wait a moment... Right, I have put it into a simulation mode, to give you a feel for what is going to happen here.”

Brent looked at the second clock. After a short pause, the hour hand started to sweep around the clock face, a fraction slower than the first clock’s seconds hand.

Grant stared at it for a moment, shaking his head. A multitude of problems suddenly became apparent. He cleared his throat of red dust and salt and started to ask the same question they all ask the first time, but then paused, “That second clock is moving so fast. Can’t we slow it down?”

Grant knows the answer, “A year will pass on the second clock and the time traveler, for every seven hours on the first clock and us here. The speed is a by-product of relativity. We have tested the kit out with monkeys and watches.”

“We think that when we push people into the future, we will give them high relative temporal velocity, at a tremendous cost in power. As I said, they should experience time in the future at a standard rate. But they will experience relative time at a much faster rate than us back here, or that is the theory.”

“But,” Brent nods his head, looking serious. “Ok. So the data is going to come at us like a bus. Everything is slowly falling into place. What do you think we are doing?”

“When it starts, I think everything will happen too fast.” Grant shakes his head, “Benson knows this. The other teams will not react fast enough. We are here to help come up with answers. I guess we are going to learn as it happens.”

He smiled reassuringly, “While we have a chance, let me introduce you to the other Directors and the rest of the team. Then I am going to have a kip before things start to heat up.”