Catalyst: Of the Nightfall (1) 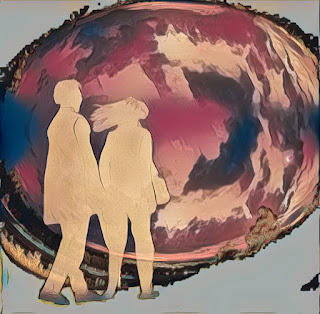 Back at the boathouse, Labrinth climbed to the bedroom and switched on the light.

David was lying tied securely with torn bed sheets close to where she had left him. Patroclus, his cat, was sitting on him.

Labrinth said approvingly “Good cat! Look what I have found!”

She produced the backpack with a flourish and dropped it on the floor.

“That was close boyfriend. I thought I might have been trapped here in this time.” David glared at her.

She came and sat on the floor close to David. She said, “No way could I have taken you up there. You do understand that?”

She looked into his eyes and saw the hurt there. “Look, I can give you a choice. I can leave you here, in this timeline, with your wife, who seems to be... Well, I just do not understand what you saw in her, David. I do not think she is a very sweet woman. I would not go out with her. Not in a million years. She wanted to send her brothers over to sort you out, even though I said you were delusional.” Labrinth said, “As I was saying, I can leave you here with your wife and her brothers, or you can come to help me find your dad, who is probably not dead but may have gone off with Catalyst.” There was something wrong with his eyes.

She stopped, realization dawning that she had broken trust with him.

“Ok, tying you up was maybe not the best option, and I know I promised I would not do it, but...”

She stopped, as she saw the tears in his eyes, and then she untied the bonds holding him.

He said, “I have had a chance to think about things.”

“Give me a chance to explain. Please.”

“You have a lot of explaining to do. I think my circulation is gone in my left arm.”

He started to massage his arm and turned to Patroclus. “You have some explaining to do as well.”

The cat looked at Labrinth, rubbed up against her before jumping onto the staircase, and heading off to find better company.

Labrinth took his arm and applied herself to restoring life hue to it.

He said, “Patroclus likes you. But I do not like being tied up every time you cannot handle sitting down and talking to me. Tell me my mom is ok.”

Labrinth told him what had happened. He sat and listened.

In the end, he nodded his head and said, “Listen to me. I agree with you. You did not have to tie me up. All we had to do was talk. You just had to explain yourself.”

She protested, “You were trying to head up there. You would have simply made it far worse.”

“I am not simply something to be used while you do your job. Look at me. I need to know something. When you kissed me before, was that just an act? Be honest.”

“I don’t know why. I got caught up in the moment. It was not part of my job; I do not do those sorts of things. I kissed you because I wanted to.”

“I wish I could trust you.”

He turned his head away from her.

She slid around and held him. She whispered, “I am sorry. Where I come from, I always had to act by myself. I have never worked with someone before.” She placed the tip of her nose on his and said, “I like you.”

There was a chill in the air. The wind was starting to rise outside.

Eyes locked in eyes. David asked, “Will you try a little harder.”

Her eyes were lost in his. She said, “I will try a little harder.”

And then they kissed.

And then they kissed, and she rubbed life back into his arms and legs, and apologized for every hurt with promises about a thousand things that were probably not important but showed good faith. She said, “I would sleep with my head on your shoulder, but I hear you are a married man.”

“You are confusing me with another man, time girl. I once gave my heart to another, but she threw it away. I have never spoken life-vows. I spent days and nights alone patching the pieces of my heart together. Now it beats to its rhythm.”

“Warning! Even if you call for help, none will come.”

She pushes him flat and sits astride him. Too late he realizes what she plans, “Not my shirt. Do not rip...”

Buttons and clothes flew, and she says, “Stay still” and places her head on his chest, listening to his heart.

After a long moment, she kicks up to his face, kisses his cheek lightly and smiles, “It was there for a moment, but now it is gone.”

“Where have you put it?”

She says, “With mine. We are in this together.”

They lie listening to the howling wind holding each other gently.

“We will have breakfast with your mother.”

“You had better not crease your clothes then...The weather is supposed to improve. We might be able to walk along the beach and find shells after the tide. You might tell me about what time travelers do.”

He disentangles himself from her and sits up, kissing her forehead, “But now, I am going to shower and get ready for bed.”

She smiled and said, “I will go look at the bay.”

She quietly ran down the stairs and opened the door to a sudden blast of cold, wet wind. She stepped out onto the deck, wet with surf. She said to herself, “Wake up girl. This cannot happen. I cannot fall for him. Not here. Not now.”

But she knew that it had already happened, and after a moment she turned to the sky and yelled, “Damn you! What did you do to me!” But there was no response, just the wind. She knew she had already decided. She would break the rules.

So she walked back up to David and took him into the future.

During the night, he awoke. Labrinth was still asleep with her head on his shoulder, her body entwined around his. In the digital light of his portable computer, he watched her breathing. He reached over and moved her hair from her forehead and then kissed her gently. She stirred and nestled closer and said sleepily, “Don’t let me go. I am asleep.”

He remembered the long shower that had ended in her return. She brought steam, tickling, laughter and running out of hot water. Then they had warmed his bed listening to music on his computer. She had thought things would be different in the future, but he left her open-mouthed when he found her favorite songs and played them with quality she had never imagined possible. When he threw images onto the ceiling, she had to pinch herself.

After a few of selections of ABBA, ACDC and Kate Bush that brought smiles to his face, and one that left him gasping for air, she started to exercise choice with a little more care, finishing her selections with Led Zeppelin’s ‘Kashmir,’ listening to the lyrics with more than usual interest. Eventually, she said, “I am feeling relaxed, now shatter my illusions with some of your future music.”

He said, “We can do that tomorrow and tomorrow’s tomorrow. Tonight I am trying to bind you with glamor. Just don’t let me go.”

He fell back to sleep as the cat Patroclus padded back up the stairs when all was quiet and curled up on Chas’s old backpack, thrown carelessly to one side and forgotten in the night.