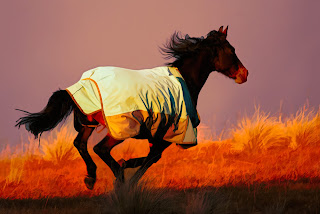 Lucy was a cracker of a horse rider, better than most of the blokes in the Jerrabatgully.

The Hurley girls, Lucy and Caroline, had proved they could steal the two horses tethered outside the Majors Creek police station a couple of times. They would be up to the bridle path in full gallop towards Braidwood before the police stumbled out of the shack.

But that was a lifetime ago, and now she was eighteen. She wore three rings on each hand, and she could feel what was happening inside her – her life was changing.

She finished the climb into the foothills to the west of the Shoalhaven River, dismounted and set up camp. She took off the mare's bridle and saddle, cleared the old camp fire of debris and started a new fire with a flint. From her bags, she brought a bottle of water and eggs.

When the fire started to burn, she fired some green pick, to put smoke into the air, above the tea tree and open forest of the range. Satisfied, she turned to boil the water with a bag of fresh tea. A bag the boys had liberated from the Foxlow store.

She felt them coming before she heard them, and smiled.

Tom came into the clearing with a rush, jumping off and rolling her onto the ground with a flurry of kisses. Bruce came up more cautiously, his horse sweating and lame: “Give it a rest, Tom,” he said, and brought the horses together.

Lucy sat up and pushed Tom back onto the ground, her face blushing.

“I have some tea for you both, then eggs and scones and butter and meat.”

“You will melt my heart with your butter,” Tom said catching his rifle from Bruce and setting it up a little way from the fire. “But, I could eat a horse,” and with her eyes locked on his, pretended to monster her unbridled horse. The mare ignored him; she had seen it all before.

“Only one mug for you, Bruce,” she said as he poured the tea from the billy. As Tom went to the fire and sat back on his heels, she went to her bags and took out her butcher's knife to cut the mutton.

She felt them coming before she heard them.

She glanced over to the horses, standing quietly. Bruce handing her love a single cup of hot tea. For one moment, everything was so perfect and so wrong.

Bruce sang out: “Look out Tom, here comes the police!”

Tom jumped up and crashed through the fire to seize his rifle. Ashes and burning embers spun into the dry brush.

Tom ducked into the cover of a tree as two shots spun by him, and then ran for the closest horse, Lucy’s unbridled mare.

As Tom sprang on the horse, the leading policeman reloaded and turned around to take chase. Tom encouraged the mare to a gallop, holding her mane tightly and leaning onto her neck, directing her through the open forest up a steep incline and towards freedom.

Lucy, on foot, jumped in front of the police horse.

She recognized the officer and screamed out at him. "Woodland, Woodland, you blasted wretch, don't shoot him!"

Woodland pushed his horse towards her, and with the knife still in hand, she ran at the horse shaking her dress. Woodward’s horse shied and swerved back down the hill.

Lucy turned to the other policemen and ran at them, shouting.

Smoke was rising as the fire got into the tea tree.

Woodward turned and came up the hill a second time. Tom had made some distance up a steep incline. But he was still within range. Woodland took aim and shot at Tom a second time.

Tom fell from his horse into the bushes.

Woodland slowed – he turned his horse around looking for the others. The hillside was alight.

He shook his head. Lucy had put the other police horses to flight. Bruce must have taken the opportunity to mount and quietly disappear down the hill.

Leaving his mounted colleagues to deal with Lucy, Woodland rode up the steep incline to where he had shot Tom. But, on reaching the spot and searching about, he could see nothing of him.

The other mounted police joined him. "Where is Connoll?" they asked. Woodland turned to them and snarled, “What did you do with the girl?”

They looked at each other. Smoke and fire were moving up the slope towards them.