Love #6: What Becomes of the Brokenhearted? 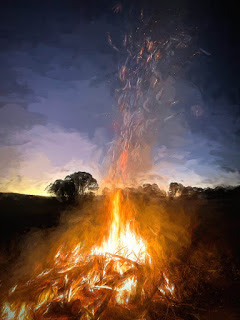 Freyja and the Thief sit in silence watching the Milky Way light the sky, slowly moving across the sky. Their faces are touched by the soft golden light of the fire and the dark blues of the high sky.

The Thief throws another branch onto the fire, hot, bright embers sweeping into the sky.

She continued, “It is Friday, the day named after the goddess of release and abandonment. Tell me a story of love. I want you to tell me a story that stirs passion and awakens desire.”

People across the world wait for Friday and venerate it as the last day of the working week; the day on which most are released from modern curse of wage slavery. People hunger for Friday night. They imagine themselves dancing in freedom, or dancing vicariously, in the reflected light of the young.

On Friday night we imagine speaking words of love and play. Yet, when put to the test, few of us have words to describe the feelings love engenders, whether in quiet passion or willful abandonment. Instead, an industry of writers in the modern era constantly strive to broaden the lexicon of love, through poetry and song. But most of us fail, remaining enslaved by a few well-worn staples. We murmur those silly love songs over and over; those words that feed quiet passion and dreary sentimentality alike.

This is a story about the brokenhearted: a man and a woman who time (and historians) forgot, but who changed the world. They are long gone to the stars. It is sometimes said that history is written by the victors. But sometimes we forget the names and stories of the victors while the present is polluted by the lies and petty squabbles of academics. Do not allow the future to be beholden to such minds.

Imagine a woman. Patyegarang, the gray kangaroo, who was guardian to the knowledge of the Eora, the people of the land. As a young girl, she sat by a fire such as this, learning the stories of the sky, into the morning as the waves washed to the shores of the edge of time. The eyes of the young were valued then because they were uncompromised by the hardship of age. She knew how the stars rotated through the nights and seasons, around the pivot point in the skies from which the southern winds blew. She knew the names of the bright stars, could distinguish the faint star clusters (Molumolu). She studied the two close galaxies that can be seen from the land, Calgalleon (Cal-gal-le-on) and Budoenong (Bu-do-e-nong), which today we call the two Magellanic Clouds, and which only a handful of the modern people, and even fewer academics, have seen for the looking.

Imagine a man. Dawes was a seeker of knowledge. He traveled to a far off country, in order to study the return of Halley’s Comet, a quest destined to failure because of the confusion of other people. He came to Patyegarang’s land and separated himself from the noise of colonial settlement. He moved out of range of shouts from the Governor’s men to a far point, into the great harbor on which they had settled. There he built a building, a long room with wood, 5 long paces long by 4 paces connected to a circular room on rocks behind the building, 3 paces in diameter. On the walls of the round room, he built a rotating roof, through which he could see the sky and covered it against the weather with heavy sail canvas.

Patyegarang watched him, wondering at Dawe’s interest in the stars.

The man was the first fleet astronomer, William Dawes. Into his world stepped Patyegarang, an Eora woman.

Patyegarang came to his house and asked him about his interest in the stars, but he could not make understandable words. So, she set about the difficult task of teaching him how to speak. He was not beyond teaching. He was a thoughtful man, trained to take careful observations. He had an absolute belief in science and had been taught in war and peace the value of study and unswerving loyalty. He spent his night times studying the stars from the observatory room and keeping detailed records of the weather.

The man and woman met on the edge of their civilizations. They were together for a couple of years, and then they were sundered apart.

During that time Patyegarang taught him many words. Dawes wrote their story slowly, every night, by a candle in his diary. Every night, as he learned her language, she would call on him to put the candle out. She refused to learn his language. At first, she taught him the names of the four winds and then the phases of the moon and sun and then she spoke to him of the stars.

(The Thief stood, and fed the fire. Then hands on hips he turned to her, standing deliberately between her and the glow of the fire. Freyja felt the cold, and cocked her head, and demanded that he move. He asked, “You feel the touch of cold, when I stand between you and the fire.” She nodded. He moved a little, allowing the warmth of the fire to fall again on her and the golden glow to return to play on her face. He continued, “The language of the first people needs to be understood in the context of the fire.”)

The Eora had words for things we do not. That touch of cold, caused by the deliberate removal of the warmth of the fire was Ŋyínadyımíŋa.

Dawes started to call her Patye. One dreary day, beset by rain, he started to transcribe bits of his diary. He took each of the words she had every used, and wrote them in the notebooks, and annotated each with the meaning they had agreed upon, the Eora language. We have misplaced his diary but still, have his notebooks.

After a downpour of rain, she removed her clothing and stood by his fire naked. He asked to put her clothes on, but she refused. She said, “Gore dyú tágarın.” At first, he thought she meant that she did it to take off the cold, but later he understood that she stood naked in order to get warm sooner.

He asked about the ritual scarring on her breasts and the removal of the little finger on her left hand. She asked him what she meant to him.

Then they talked of love.

She taught him words we use every day, and some of the things we no longer understand or forget we once understood.

But it was not to be.

Relations between the settlers and the Eora deteriorated. One day, Dawes said that if Patye washed often, she would become white. She threw down the towel as in despair, and said, “Tyerabárrbowaryaou” (I shall not become white).

On another occasion, Dawes asked her why her people had attacked a settler. Patyegarang responded, “Gūlara” (Because they are angry.)

When violence led to bloodshed, the Governor insisted that Dawes accompany an armed retaliatory band to kill Eora, without compassion. Dawes initially refused, only agreeing when the matter came to an internal crisis. He navigated the troop into the bush, and away from the Eora. When they returned to town, Dawes angrily criticized the Governor. His principled stand against arbitrary violence at the hands of a senior officer serves as a salutary lesson in humanity. It also made his plans to remain in the colony untenable.

But Patye had one more word to teach Dawes: “Galgalla “ (smallpox). Galgalla spread through the ranks of her people, killing most without remorse.

Dawes has not told us what happened to Patye in his journals, and his diaries have not yet been found. The story of their love and the names of the stars told him by Patye, and recorded in his diaries are still missing in some untapped box in a library or private collection. Slowly his other diaries, metrological records, letters to Greenwich and reminiscences of other colonials are emerging. Or perhaps the story has been blown like leaves before a hurricane in Antigua.

But this man, who could not bring himself to write about the past, went on to join Lord Wilberforce’s campaign to abolish slavery and worked to that end until he died, impoverished. At a time when the movement required actual support, he gave it, helping to tip the balance and change the world.

Lord Wilberforce once said, “I don’t believe there is in the world a more solid, honest, indefatigable man, more full of resources and common sense.” But credit here is more widely to be shared.

She lay back on the rock, letting his voice die into the distance. A train called across the valley. The rising moon lit the forest on one side of the ridge and the tollway to Ware lit the other.

The Thief had been stoking the fire, and she could feel the heat of the coals hot and white blue. She looked into the deep black northern sky, searching for a hint of her face. She heard herself thinking, “Compose yourself when looking into the mirror.”

But Freyja could not compose herself. She lifted herself back and said to him, “I am confused. Why did you tell me that story? I do not ask you to educate me; I want you to entertain me.”

He said, “I am telling you the stories of the world; what makes us human. I am not telling you how to kiss a fisherman.”

[this story is extrapolated from the diaries of Dawes, recently discovered in a British archive.]