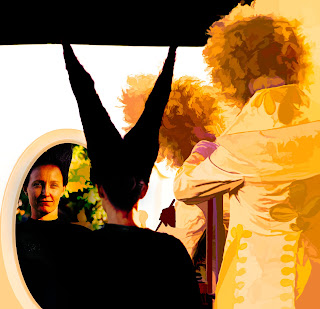 Aristophanes started, "Entertain my fantasy, ignore the implausible, and hear why, in this life, we only get one true love." <hiccough>

Aristophanes, a fierce opponent of fancy words, glared at the doctor, looked at the goblet of water that was his prescription., and grumbled "By the Gods" <hiccough> There was a ripple of laughter and the doctor gave him the hurry up sign and motioned for him to drink the water. Instead, Aristophanes threw the water to the ground and suffered the rise of a cloud of dust. Then, to the surprise of the other guests, he let loose a terrific sneeze.

Aristophanes, shook himself and took an explanatory breath. Then he shrugged, "You might laugh at me, rather than with me, but I think I have discovered the cure to hiccups, in spite of our doctor here."

The doctor threw up his arms and lounged back onto the sofa, "Don't shoot your bolt and run for the door, Aristophanes. Speak your piece and we will judge it as it deserves."

"In this life we only get one true love.

You all know, deep in your heart, that what I speak is true.

Humankind was once very different. Originally, we were once a three sexed race of four legged creatures, blessed with four strong arms. We rolled around bouncing like great balls, terrible and powerful, challenging the Gods for supremacy.

To reduce humankind back to a manageable form, Zeus cut each being into two halves. A bit like you would cut an apple in half for preserving. In their new form, each creature only had two legs, and were unable to bounce. Not a 'details' God, Zeus asked Apollo to tidy up his handiwork. Apollo set to work stretching the the skin over the cut marks, creating bellies, breasts, faces, noses, eyes, ears and lips. After a bit of trial and error, and some entirely understandable early mistakes involving elbows and noses, all of the creatures were eventually rebuilt and all their bits pasted into roughly the same places. A bit like the Gods actually, which might have been a mistake.

Not every one ended up the same, and there were lots of variations, for the Gods worked fast. While, eventually, most could be thought male or female, some were glorious other-kinds, and sometimes those who had male dispositions and desires ended up in non-male bodies and vice versa, leading as it was, to vice and lots of other stuff. So, you see that this account of the development of human kind explains every type of human desire, form, condition, and excess (and should be taught to all young Athenians rather than that new fangled fancy lawyer-talk, arithmetic or atomic  nonsense).

Still, the new severed creatures did not forget the harmony of their original form, and each half tried to find that which it had lost, its "other half", or, as the flute girl sings, its "one true soul partner". In ancient times, it was easier for the severed beings to find their other half, and when that happened, there would be heart warming reunions when the poor diminished being would open their arms, and clasp the other close, to restore the impression of the older unified bouncing ball form, which in time gave rise to infants. Alas, as time has gone on, and it has become harder, but not impossible, for soul partners to meet because of the huge number of infants that now infest the world.

But, when they do find their other half, regardless of the heat of sex, they really do become inseparable (infants excepted).

Imagine if that great engineer of the Gods, Hephaestus, were to come upon a pair lying together. You know, innocently lying together, just enjoying each other's company, listening to the flute girl and maybe drinking red wine. Hear Hephaestus ask the pair if they would like him to fix them by melting them back together, into their ancient  unified form, so that here on Earth and in the afterlife below, they could be one rejoined soul. Together, forever: eating the same food, listening to the same favorite song time after time, going to my plays at the same time, drinking fine red wine deep from the one goblet, and learning how sneezes cure hiccups (a gift I freely give the world). Surely they would greet Hephaestus's offer with grateful enthusiasm.

If we are friends of the God of Love and at peace with him I am sure that we shall find our own true loves. Although, sadly this rarely happens in this world at present. But, if our loves were perfectly accomplished, and each returned to their original true love, then our race would be happy (if rounder)."

The doctor looked unconvinced, "Cut in two? And, what happens if you can't find your one true love in this one life we are allotted?"

Aristophanes shrugged, "A man may learn wisdom even from a foe. Comedy too can sometimes lead to a better understanding of what is right. This may not please you, but I always speak the truth. If you can't find your soul partner, find the next best thing: strive for congenial love."

Notes:
This speech was delivered at the same drinking party (symposium) attended by Socrates which we visited a couple of posts ago. One of those parties which we should have all attended, but missed. Still, it was reported by one of the stone mason's mates who was lying (probably half drunk) in a corner, and he passed an account of the party onto yet another mate who later remembered enough of it to tell Plato, who would of only been a young boy at the time, and probably not allowed to go to drinking parties, even without wine. So, we can be assured of the absolute veracity of everything reported above.
As with the content of the words spoken at the party, the party itself can be precisely dated by references to events - here shortly after the host Agathon received a prize 416 BCE.
Aristophanes was an accomplished comic playwright, winning many prizes for his work and, even though he offended many (or, perhaps, because he offended everyone), he managed to survive the volatile politics of the day. He didn't like doctors, politicians nor lawyers (or the way they spoke) but he was happy to drink their wine (less happy drinking their water) and, as you can see, hankered for a return of the old days.
The idea that we have a predestined soul mate is pervasive in many cultures (and the basis of 95% of pop music and 69% of crimes of passion - or maybe the stats should have been the other way around), and so it behooves us (note that i am using the 3rd person present here, a side effect of reading too much ancient Greek) to look at how this idea may have been expressed in earlier times. Aristophanes suggestion that Hephy might melt soul mates into a single being that would persist into the after life saving on expenditure of red wine and food, is not an idea that gets a lot of air play these days in pop ballads about eternal love.
A bit of a sad postscript is that the Doctor, Eryximachus, was later executed (or maybe just exiled) for dabbling in religious mysteries concerning love (specifically the highly secretive Eleusinian mysteries) after a later drinking party. (If you must go to drinking parties, be a bit more careful about the company you keep.)
I think Aristophanes intended that we laugh at this account, perhaps to force us to think more carefully about the words we use to explain love actually mean (and Plato leaves a crumb in his account about the inability to discern comic from dramatic playwright). Words, and the notion of 'One Love' have a dramatic effect - and, no doubt, shape the world we live in, as we will see in the next post, concerning a young woman called Florence.
Image: Apollo fixing up one of the humans cut in half by Zeus. Note that he still has to sort out the hair. No doubt, the other half human resulting from this cut, turned out bald.
Labels: Love Series Short Story