Catalyst: Of the Nightfall (4) 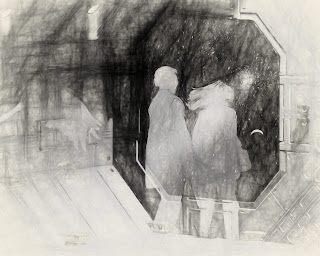 He stopped at the door into the base and said, “I can’t let you into the base with that gun. You understand? If you give it to me, I will..”

She pulled the gun out and threw it under the excavator, “I trust you. Just find something to brace my leg, I will give you the messages from your family, and I will leave.”

They entered into the base, pausing briefly to listen for pursuit. The door shut them in darkness and, after a moment, dim lighting illuminated a passageway to the storage facility and a lift down deeper into the base. He stopped near the elevator and took her into a small service area and made her comfortable, saying. “There are living areas below, but I cannot take the chance we will meet one of the others, some might still be up. There is a washroom up here. Wait here; I will be 10 minutes collecting stuff I need from the medical bay below.”

She nodded, “I am feeling a lot better out of the cold. Thank you for bringing me here.”

Chas turned to leave and looks back at her. For the second time, he asks, “Do I know you?”

She says, “You asked before. Your wife told me all about you, but I am just a beggar.”

He was away for long enough for her to retrace her steps and return.

He said, “We are in luck. The others have called it a night, and I have found all we need to make you comfortable. You will be able to rest in one of the shelters below, and we will see how you are in the morning.”

She countered, “Your wife would not be happy to find you alone with another woman.”

Chas laughed, “My wife trusts me, and I would never betray that trust. You are safe with me.”

She says, “But you left her behind, and broke her heart. You left her when she would never have left you.”

Chas pauses, “You have come to argue with my choices? I will not argue with you. Everything I do, I do with only her in mind.”

She says, “Then why not take her into your confidences. You left her with questions unanswered. She may not see it the same way you do.”

He says, “My wife has nothing to fear from me.”

She says, “How does she know you have not left with another woman. One from the past, you have talked about and searched for.”

Chas shakes his head, “I have one wife. I do not look to others to take her place, in part or whole.”

She says, “How is that possible? You have interests your wife does not share, needs she cannot satisfy. You have many friends, men, and women. How does she know another has not replaced her in your affections?”

Chas says, “You ask many questions, for a beggar.”

The old woman pauses, “I have promised to return to your wife with honest answers to some of the questions she would not ask.”

Chas says, “For her alone, and not your own prurient interests, will I account. I am here only for one reason. I am here to sort out our lives. She deserves a life with the real me, not some figment of the timeline.”

She says, “Ah, the timeline. It is hard being a time traveler, eh? And each time your shift timelines and she greets you with love in her eyes. What do you see? Do you see the same woman, or do you see another suitor to seduce?”

Chas says, “Your imagination is running with the pixies. She is the same woman. She is the only constant in my life.”

She says, “I do not doubt your love for her. So, what do you propose here?”

She says, “Let me guess. Catalyst has persuaded you to go back into the past and stop the time experiments.”

Chas shakes his head, “How do you know so much? Why are you here?”

She suddenly seems ancient, and he fears she is about to collapse, reaching out to her.

She says, “I only had that one last question. I just want to understand.”

Chas says, “If you had a way of going back to the start. Just to live an ordinary life. To have the same memories...”

She says, “So you propose to return to the past, and you will start again, eh. And, what happens to the Dawn left at this time? You intend that someone’s bed will never be warm again.”

Chas says, “If I go back to the start that will not matter anymore...”

Chas grimaces. She has asked the one question he had been hiding from. He answers slowly, “Because the Dawn here will never have existed.”

She pauses, and whispers, “Perhaps you should fix that brace on my leg now. Or is that not important anymore? After all, will I not cease to exist as well?” He does not respond, frozen in turmoil.

She asks directly, “How can this be? Do you not have another way?”

Chas is still holding her shoulder, and she can feel him shaking a little.

He says, “You ask hard questions. I do not have the answers.”

He shakes his head, “Come into the washroom, we will have a look at the leg, and I will do what I can.”

He sat her next to a pail of warm water and cut her jeans away to show the injury.

He knelt in front of her and washed her leg and foot. Wordless, he stopped, resting his head on her knees.

She felt his tears.

Then he stood in front of her. He lifted her up to him and undressed her completely. He washed away the rest of her disguise and rubbed olive oil into her dry skin.

He started to speak, but she said. “Hush.”

Then he dressed her in clothes he had brought from the base below.

Memories flooded back to Dawn. The rushed trip to get into the desert. The days lost trying to find the base. Finally finding his biplane tucked into a small bay of the salt lake. From there it was a simple matter of following his tracks back up to the base and a locked door. More than a locked door, for there were reptiles watching the area from vantage spots nearby. The reptiles stirred but a whistle in the air sent them back to their posts.

Still, Chas was a creature of habit so a small hide was set up on the side of the lake for her and she waited. It was a moment’s work to change her age and appearance. She swallowed an astringent mixture to make her voice harsh and rasping and wrapped her face in a veil, and tinted eye lenses changed them beyond recognition. She grimaced at the need but was unwilling to take any chances with his reaction. Then temperatures had soared, baking the land. As night fell, the temperatures dropped, quickly.

Then she looked at him and remembered what he had intended.

Dawn sat down, trembling and weeping, while he watched her.