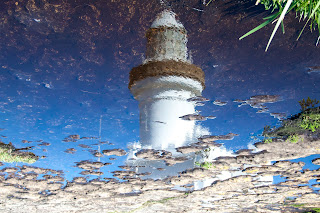 The leaves were falling, and the killing breath of winter was not far off.

She had brought him to the park to sit on the old bench in the afternoon sun. He grumbled, but with a practiced tone she reminded him that he liked the park, and that once he had bought his own family here.
Once.
He grimaced, a time so long ago he could not remember. She was like the other nurses back at the home, and he knew that any complaint would be ignored, so he saved his breath.

The warmth soaked into his frail pores, and he drifted into a gentle sleep. He grumbled as she rocked him awake, explaining with excitement in her voice, "Look, Bob! A wedding. Here in the park." He shut his eyes in annoyance, but she described the party gathering a little way from them, an uncomfortable mix of men in suits that had been hired for the occasion and women dressed in last year’s fashions. A squeal from a loud speaker heralded the marriage celebrant and a fall of more leaves. He opened his eyes and grumbled, "I do not care for weddings. Never saw the sense in them. Loud noisy things."

But she just laughed at him, pointing out the cameras and the groom standing uneasily in the center of a group of young men. She said, "They are so young. Oh, what a treat!"

Moments later a bridesmaid walked a couple of feet in front of them, turning and catching her eyes with an embarrassed half smile whispered, "The bride is coming."

Her eyes opened and she reached over to him and said, "Stand up Bob. Please. We have to stand for the bride." He sighed, and then with her help, stood uneasily on the dry grass

A rush of people trooped past, followed by the bride and her mother. They paused nearby to free the bride's hem from a catch of concrete. She, waited till they had freed the garment, and whispered a loud, "Good luck!" The young woman turned and smiled at the old couple, nodded her head and headed to the head of the small crowd and a scattering of applause.

He said, "A bit stout for me. In my day brides were..." And he tried to remember, but he saw a tear in her eye. He said, not unkindly, "Get off, what’s that for? No need for tears."

She sniffed, "I was enjoying the sun and the leaves. But a wedding as well! What a joy."

She turned and strained towards the crowd, trying to make sense of the noise coming from the loud speaker. After a long moment he shook his head and sat down. She took out a tissue and blew her tears away, in a noisy trumpet.

He cautioned her, "No need to interrupt them. They will have reason to rue this day. Mark my words, they will be sorry before the year is out." But she hushed him, ignoring his mumblings. He tried a different tack, "What is happening now?"

She turned and sat next to him, "They are making their vows. He has promised to give up his Space Trek collection and to respond to all of her texts." He shook his head, wondering what that all meant, the words slipping from his grasp. He hazarded, "Sounds reasonable. What about her?"

She said, "I could not hear, she was too quiet."

He jumped in, "Probably vowed to give up housework."

But she was listening again, holding her hand in the air to ward away the sun.

He noticed the gold band on her hand, and wondered what she had vowed.

Peter Quinton said…
Thanks Anonymous. The disintegration of the mind is a terrible thing when looked at individually. When the viewpoint switches to the group, there is the solace that relationships and memory persists and can be inferred even in these times.
Saturday, March 16, 2019 at 11:02:00 PM PDT