Love #39: Once Upon A Sunrise, in the Burrogorang 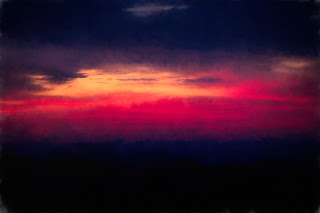 When she had first stumbled through the waterfall into the Dance Floor Cave, Hanora heard a murmur of voices and saw shy searching glances directed at her. The bullock drover had told her that the bush community would be welcoming. There was something else unspoken in his voice, but he had dropped his eyes and would not be drawn.

She heard a rush of small feet and, then, the sound of the bullock drover laughingly caution the young children who were mobbing him in search of boiled lollies. In turn, the gaunt sun-browned women of the Burrogorang separated from their men-folk and came to greet her.

A gust of the sunset wind blew bush kitchen smoke back into the cave. Hanora tasted the fine mist from the overhang waterfall mixed with the slow cooked mutton and onions. Then the sound of voices rose, in anticipation and concern. She followed their eyes to the dim outlines of the last arrivals as they hobbled their horses on the meadow below.

As she watched, the last rays of sunset caught the waterfall along the overhang that made the cave and turned it into a cathedral wall of sparkling stained glass. One of the mountain girls laughingly placed a garland of native flowers on her hair as the wall took on different colors. Then she leaned into Hanora and pointed to a man coming through the veil of water. Hanora stood open-eyed, catching a glint of fire in his shadowed face as he looked back at her. Then he turned to greet the bullock drover.

She took a breath of air but then tensed as she watched her husband to be limp into the cave.

Bush dances are crowded affairs with scarce room to swing a cat.

Every rock shelf in the Dance Floor Cave was crowded with the young and younger. The bullock drover carefully unpacked his fiddle, and everyone started to speak. At a bush dance, sometimes the best you can do is to surrender to the night and clap or stamp your feet. The nights can be loud and long, with musicians bashing out a steady rhythm to drown out talk of potato blight and straying cattle and the hurried making of wedding vows. But casual talk flickered and died as the evening shadows lengthened. Unfinished drinks rested unloved in the fading light when even the old folk join in the dance.

And then the world starts to become fast and blur: the young seem old and old feel young.

In the glow of the coals from the fire, Hanora and her husband sat. He did not say much, but it did not matter as Hanora was suddenly full of words. He listened, nodding and smiling. Their faces were partly in shadow, as the voices of others slowly faded into the deep night and became silent. Her voice became quieter and finally stopped. Then she reached out to his face, and with a finger traced a scar up his right cheek and to a nose that still showed the signs of an old break. She touched the wound gently, asking with her eyes if her pressure was too great.

He smiled and then grimaced, trying to stutter an explanation.

Deeper still within the Dance Floor Cave, from where he watched, the old drover shook his head slowly and turned away.

Hanora's new husband creased his face in remembered pain, and he clenched his fists white. Hanora watched a single tear form and fall to the sand upon the ground.

She took his hand and smoothed the ground. She wrote her name in the sand and silently turned to him. He looked at her intensely and then stared at the sand. He smoothed the sand around her name, and she watched him start to write.

They had been rounding up brumbies, the wild horses, in the valley below. Almost at the yards, the horses had been spooked and turned and fled. He turned to chase them but fell onto rocks, and he lay there still and broken for an age. In time, the scars had knitted awkwardly. In time, he got back on his horse. Finally, half a year later he brought the brumbies safely into the yard.

She watched patiently, encouraging him with smiles and written questions about a thousand unimportant details.

Towards dawn, the bush folk slipped quietly away into the night. Last, the old drover bid his farewell, and they were left alone.

Hanora looked at him. Everyone had gone, but she could still hear the music from the night before.

He climbed to his knees and held out his hand. He said, "C c c c c...". Then he dropped his eyes, embarrassed. On the ground, he saw the words and drawings of their conversation, in the sand. He looked back up at her and tried again, "C c c come." She turned to reach her pack, but he pulled her away, towards the cave entrance lit dimly in the early morning light.

She hesitated for a moment. Then she stood and followed him up the track leading to the plateau above.

He took her to the edge of the cliff, next to a waterfall cascading over the edge. He threw his legs over the cliff face and held his arms out to help her sit next to him. Together, they watched the dawn slowly color the sky. On the edge of the world, they looked out and saw a landscape so wild and vast, and it took their breath away.

Hanora thought, "I am small. So insignificant. If I fell now, no one would every know, nor care." Then she found his eyes and knew he would not share that thought. The light of the sun suddenly burst into the world, and detail and color lit the scene. He put his arm around her.

Hanora said, "This is beyond my understanding, I am just a speck in the world. It is vast."

He turned to her, his eyes full of the sun and said, "Sublime."

Her heart soared, and she surrendered to the moment, "I want something just like this."

Her life was hard as might be imagined. Full of floods, fires, miscarriage, heartbreak and ill health. But it was also full of his quiet silence and the cycle of the old drover's passage, the music of the cave, and the sound of her daughter's laugh.