Never-Never is a term that was used from the mid 1800's by men and women living on isolated Australian sheep stations. It derives from the illusion that extreme heat and dust can create on the horizon, and which can drive people mad. Today, some tourist operators would have you believe that the term is owned by the central regions of the country - but, then, that is tourism. This is a harsh lonely continent - the Never-Never is never far away. 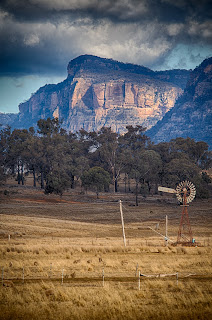 Scottish colonials made some of the most inhospitable parts of this continent home.

Off the road from Lithgow to Mudgee, near the Wollemi Wilderness, the Scots rewrote the map of this isolated community in New South Wales. The walls that tower around Glen Alice in the Capertee Valley form the second largest canyon in the world. Unlike the smaller US Grand Canyon, this canyon floor is covered by sheep and cattle farms, which during drought threaten to blow away in the dry dust storms. 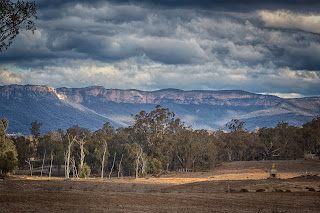 Dry clouds drift into the vast Wollemi Wilderness, past the ruins of an old sheep station. There is not much in the way of villages in the canyon, but its walls are spectacular. That road is a little windy in places, and there is a bit of dirt, but it is school bus territory. It is possible to plot a circular route via the little town of Kandos - which much bigger than the Glens, and is guaranteed not to disappoint.
Here, two visions of the drought lying across the land. The Never Never is really a state of mind - or so the old drovers say. But then, they also say you can drink your way out of it. If you talk to some of them for long enough, they will tell you all sorts of things you didn't know, like how Billy the Kid escaped to Perth and ranged the gold fields under an assumed name (some say Billy was one and the same as the great grifter Lassiter).
You know you have drifted into the Never Never when you start to believe such stories. I once met a bloke who believed he had met Billy who had gone on to find such a big nugget that he was entertained all and sundry on a luxurious yacht befitting the Tichborne claimant in the middle of the desert. Even Mark Twain came to Australia eventually, why not Billy the Kid and, perhaps, Elvis? All things are possible, in this best of all possible worlds.
The road from Lithgow to Mudgee has lots of temptations, but most folk take detours to better known places like Hill End. I only started to explore the Capertee because of its proximity to the Wollemi and the ruins of Newes.
Mudgee is a bit of a surprise these days. Today, Mudgee is surrounded by olive groves and orchards. Once it was known only because of its racetrack, which had a bit of a dip in it which obscured the race marshal's view, and in which all manner of dark deeds were done. Today it is scrubbed squeaky clean, waiting to be rediscovered.
But you should consider a day's detour to the Capertee Valley. Not the road to Newes, which is heart attack steep, but the road to Glen Davis and Glen Alice. (Do not make the mistake of those who look at maps quickly - there is no road route from Glen Davis to Newes.)