Edge of the World 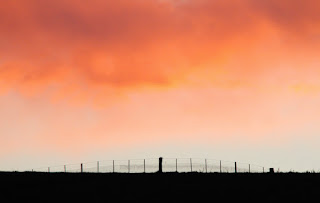 Here, near the edge of the world, we have learned to read the ground around us.

Given enough time, after rain, ground surfaces start to resemble a blank piece of paper before cracking into wafer thin sheets and then decaying into fine dusts.  Under influence of the elements, the surface of the ground takes on a regularity of form – a thin unstable upper layer (dust or granular) on top of a more stable layer (rock or loosely packed clay/soil). On these pages every movement is recorded.  In the right circumstances the story of the bush can be read as clearly as if it were written in ink. In the harsh light of day, only serious bush-craft can detect these tracks, something way beyond my limited skills.  But, in the early morning or late afternoon, when the sun is low, or on nights when the full moon sits close to the horizon, the slight depressions are caught by the light.  The tracks emerge and you can slip back in time. After a rain storm the page is wiped clean. Imagine a clay-pan. The upper layer of soil lies disturbed and is slightly depressed into the lower.  In the soft upper layer, a lizard wandering over the softened ground has left a clear set of tracks for all four claws.  The pattern of claw marks are the shape of large commas – the tail of the comma pointing in the direction of movement.  A line between between the path of left and right claw marks, indicates a sharp tail. The depth and size of the tracks suggest a smaller animal: perhaps a small blue tongue lizard travelling west. If the clay-pan is long enough, the trace might continue on for some distance.  In some places it might disappear where a wallaby has scraped the surface for a dust bath and where an echidna has raided an ant nest.You can tell that the tracks are fresh if very little dust or grains have blown onto the traces. Here and there the traces might overlay the older tracks of the wallabies and birds. The regularity, spacing (distance between depressions) and saddle (the offset between the tracks and the mid-line of travel) of the tracks can tell you how the lizard moved – here at a walk, there it paused, looked up in a crouch (deeper indentations), here, with the saddle becoming smaller and the spacing increasing, the blue tongue moved to a gallop.  Then a confusion of tracks.  Further on, nothing. Within the confusion a single print of a fox.If the light is right you can start to disappear back into the moment when the lizard was wandering here.  But then, from beyond rocks at the edge of the clay-pan, the sound of laughter.  Suddenly you are back in the present, reassessing what you have seen. Was that a lizard or just a reproduction?  And was that laughter at your expense.When you look back, the sun is higher, and the secret writing has faded back into the ground. But the fence is still there, on the edge of the world.