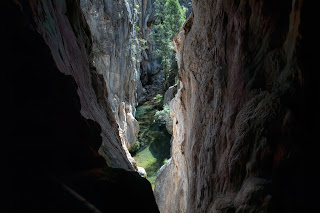 Mares Forest Canyon is a wet limestone canyon normally full of small waterfalls. Seventeen months after the catastrophic bushfires through this area, the area remains closed.

Here we are, deep in dream-time country.

Some people describe the dream time as the far past or even the never-never. But, wherever you walk you are never far from the dream-time.

This country you see here, the abyss, the valley and the streams, were shaped by a meeting of two giants of the dream-time: the serpent fish Gurangatch and the tiger cat Mirragan.

You can feel the power in these names. The names are powerful.

Up on the plateau, Australians have lost their understanding of the power of names. They give names from the old European countries to this ancient land. Near Leura, a lonely Scot called one sheer cliff Den Fenella after MacBeth's deadly grandmother (the English despoiled the original Den Fenella, building a railway over it). Today, those who live near the 'newly' named Den Fenella cannot remember the story of Fenella. It is just a word, strange and beautiful, something to beguile tourists with and make money from. Today, we name places after the rich and powerful, merchants and politicians, sportsmen and women, singers, horses that win races. We give things unique identifiers so we can own them, sell them. We name everything we can touch with artificial labels. 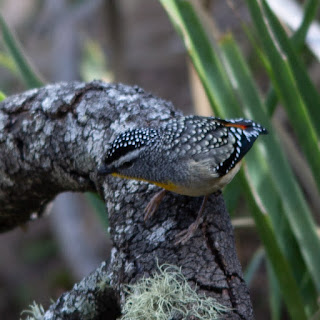 Those things they named had significance because every one of them had to remember every name in the landscape. Even so, this was still a massive pool of information. To help systematize the knowledge, they named things according to the essence of the thing itself.

You can still hear the name given by the first people to the waterfall behind us. All you need to do is to stand near the base of the fall, and listen quietly.

If Europeans had not destroyed the waterfall at Warrumba we would have been able to listen to the rhythm of water there
After a while a recurring pattern would have been heard - the name of the place: the essence of the thing.

Down here, Gurangatch and Mirragan are far more powerful that the witch from half a world away. We still know their story. Settlers came down to the floor of the valley, but they could not tame it, and apart from some farmland in the Megalong Valley, they have left it, taking their stories with them. But one of those early settlers recorded the story I am going to tell.

The first people travelled across this land, but the rivers and streams were of primary importance to them. The first people were spiritual and practical. The law of the people determined the names of things, how they were remembered in story and how they were retold in ceremony. The law of the people required that you take the name of the closest named place to the birth and you were forever associated with the place.

In the far past, animals took the shapes of men and women, and walked the world as giants. Two giants lived in this place.

The serpent fish Gurangatch lived in the deep rivers. From the name you can tell that Gurangatch is large and powerful in water, capable of moving fast.

The tiger cat Mirragan lived in the forests camping by the sides of the rivers. From the name, you can tell that Mirragan slides through the shadows of the night forest, deadly silent. Mirragan became a fisher. He became a good fisherman, learning catch fish according to need with hand, spear, woven nets, stunning poisons and rock traps.

However, when Mirragan saw Gurangatch, he put the question of need to one side. He desired to kill Gurangatch to show his prowess. He placed pride ahead of sense.

She woke inside the warm river, swimming with her kin, deep down into the waterhole, chasing small fry.

She felt his shadow and sensed the danger. She dived and his thrown spear travelled harmlessly past her, twisting and leaving a trail of bubbles to mark its passage. She dived into the dark cold depths, waiting for the danger to pass. But it did not.

Mirragan stripped the bark of wattle from the trees starting to flower and threw them onto the water. She saw fragments of wattle fall into the depths stunning all around her with poison.

Aware of the danger she exploded from her hiding place and leapt into the bank, destroying all around her, renting the land and carving a great abyss.

She was fast, but some of her paths were fruitless, and she had to double back. She was powerful, but even the powerful have need to rest. She rested with her kin, and in resting she made deep safe waterholes, protecting them with dangerous currents. She was strong, but sometimes the land defied her, and she had to travel deep under the ground instead.

As she fled, she caught glimpses of the hunter, the tiger cat, stalking her in the shadows. She saw him snarl at her, and she snarled back, looking for ways to escape.

Usually, this is a fun, swimmable, wild place. Even in drought, there remain pools of water in the canyon: crystal clear, deceptively deep and cold. Nearby, the larger Wombeyan Falls and the numerous smaller falls into the canyon are sleeping.

In winter and early spring, it is best to look at the cold water from a distance. Here the vantage point is the Tinted Cave, itself carved by an underground waterfall.

Images, from inside or near the Tinted Cave, looking down onto the Mares Forest Canyon. Single handheld shots. 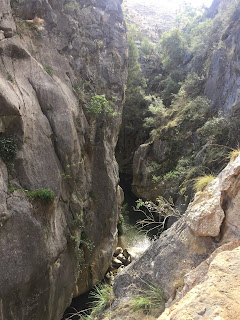 Note: Ok, not everyone will find this a fun canyon to swim. A wet suit and river shoes are recommended. There are three long cold pools to traverse and lots of rocks to climb over. You will* encounter poisonous snakes. (* rule of thumb at Australian waterfalls: every fall has one guardian snake, which you will encounter.) 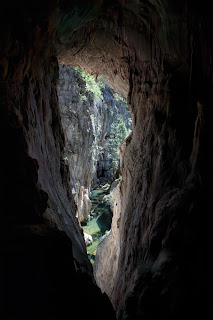