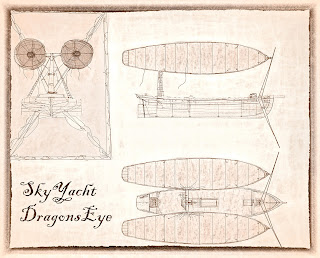 They told stories as they slipped through wisps of cloud.
The old New Zealander Bob started, “I was with the Horse Lords when we were battling the forces of evil.”

The sails of the sky-yacht were taut against the wind. Around them came the sound of ropes straining in the darkness.

The night was falling. The giant gas Farsigh was slipping from the sky. The pale light of their sun was only faintly visible, just another star.

The crew of the sky-yacht, human and wraith were around the cooking brazier enjoying an evening meal of fish stew and seaweed.

Bob paused for a moment. A fifth sense had already cut in, warning him that those around him would not understand his involvement with the orcs.

Growl wanted to hear this story. Growl had heard bits before and begged Bob to tell more. She could not help herself, “The Horse Lords stopped the force of darkness from getting in. And they won the battle! Your scars are from that fight?”

Growl looked at Bob, his face lit by the flames. “What a life, to have been there.” She sighed and stretched back into her mate Wander’s warmth.

Wander batted her shoulder, grumbling, “This is not your adventure.” He smiled, and mock threatened, “The Horse Lords would have eaten you and used your pelt for their litters. Live your life.”

Kathy caught Bob’s attention as the wraiths descended into play and argument. She picked up her plate of soup and moved closer. She demanded, “Why keep bringing this make-believe story up? It is a lie. The wraiths are not like us. They will not understand.”

Bob muttered, “But I was there.”

“How were you part of it?” Kathy softened, “You have been through a lot. I know you got lost for a bit.”

“A drifter. Yeah bro, a drifter. A good for nothing. A drunk on one long bender. Hard bro, hard. Eh.”

He squinted his eyes and looked away. “But I was still there. Eh.”

Bob lost focus, drifting back to the Canterbury Plains. Born and bred there. His parents were dirt poor. As a child, he had learned to ride on the plain before he left to work on the trawlers.

He had come back when things got bad and had tried many jobs. He tried out for the part of a Horse Lord, but he missed out. Instead, the filmmakers moved him around a bit. Mainly he was an orc, but sometimes they cast him as a town person, and sometimes just a dead body. He grimaced, remembering one of them remarking about how convincing he was at playing dead.

Most of all he had enjoyed watching the Horse Lords gallop together all dressed in green and brown tunics. He watched them race across the river flats in tight groups with a big smile on his face. He had never seen so many people all together at a time.

But he could not find the words to explain it to Kathy. Lost in memory.

Kathy saw him drifting, “Come back. You rescued us. You do not have to be a part of a made up story. There is only you and me now. We have to rely on each other.”

She reached out and held his hand. She felt the tremors in it and looked at his face. Just below the surface of a couple of months of decent food, no alcohol and renewed purpose was frailty.

She paused, trying not to think of the others, “I need you to be real. Tell them of your fights with the spiders, or how you gave up the bottle or when you fished on the sea. Our friends do not understand dreams.”

Behind them, the wraiths continued to tease Growl with laughter and nips. Bob lifted his head and looked at Kathy. They all kept their hair fairly short, except for Kathy. The wind was playing with her hair, tossing it against her face in the twilight. In the light of the fire, there was a tear in her eye.

She was quiet for a moment, “I just want to go home. Back to my life. Back to my daughter, and the others. To start again.”

Bob shook his head. “This is my home now. I do not want to give any of this up. I have nothing to go back for.”

The captain of the sky-yacht, Belle, disengaged herself from the others. She turned to Kathy and Bob. The dim light accentuated her large eyes and sharp cheekbones.

She spoke directly to Bob, “I hear you my life partner. But we agreed to help Kathy get home. If that means we leave this place briefly, so be it. I hope this adventure ends well and fast. But I promise that you and I will stay together regardless.”

She turned to Kathy, reaching to both of them, “You will be home soon. Just ten cycles of Farsigh.”

Wander joined in, “But first, we have to deal with the spiders.”

Growl said, “Enough of spiders! Let us hear of the Horse Lords from the human male first. Maybe there is a lesson there for us all.”

Kathy shook her head and shot Bob a warning glance.

Bob cleared his throat. He was suddenly between two rocks.

“The Horse Lords built a great wooden fortress, up back of the Canterbury Plains. On a funny shaped hill, bit like a big loaf of bread. Before the Horse Lords we called it Mount Sunday, but now...” he shrugged his arms, giving Kathy’s hand a squeeze. “The tourists call it something else. I do not know what it is named anymore.”

Kathy’s eyes narrowed, staring at him.

“The enemy was coming at them from the lowlands, and the Horse Lords just hung around for a while. Talking. Guess they did not know what to do eh?”

He looked at Kathy, his tongue twisting, “Filming, they were filming it.”

Growl asked, “Did they have many sky-yachts?”

“No bro. Just horses. But when things were looking grim they got up and left. They did not try to fight. They just went somewhere they could lay low. A place they could defend.”

Wander stood with extended claws and swiped the air, “I would have stayed and fought. What form did the evil ones take? Were they spiders or scorpions?”

Belle interrupted, “We do not need to invoke the names of evil here. We have enough problems without attracting any of that brood.” She paused for a moment and asked Bob, “Did the Horse Lords dispatch your evil altogether?”

Bob shuffled his feet a little and looked at Kathy. She was smiling at him, “So you were there.”

Kathy looked at Belle and said, “The evil is gone. We need not worry about it anymore. Bob has been explaining a human custom. It is like storytelling, something all of us enjoy. But it is slightly different. Humans sometimes relive their stories: sometimes deliberately; sometimes accidentally. To those who are reliving the story, it is real.”

Belle asked Bob sharply, “Why invite evil back to your land? Just to relive the experience.”

Bob said, “Yeah bro, Nah. I keep making the same mistakes. One day I will get it right. When I was with the Horse Lords, I learned different things. Things I would not have learned any other way.”

Growl asked, “How many Horse Lords were there?”

Bob thought for a moment. In his imagination there were hundreds. But when he thought hard about the Canterbury Plains, the number started to dwindle. He murmured “No” as he tried to remember. “Wait.” He reached into his pocket with a shaky hand, fumbled for an old dog-eared wallet, “I might have something here.”

Belle’s eyes widened, suddenly worried for him. Bob’s wallet was the total of his earthly possessions. There, behind a letter from the Public Guardian’s Office, was a small collection of faded photographs. Bob paused, passing over a black and white picture of his mother, and one of the old farmhouse. His face was set grim. He had not looked deeply into his wallet for a while.

Next was a promotional picture for the film. A photo of the Horse Lords with the Horse Lord fortress in the distance. Bob leafed it out, careful not to disclose the one below of his head sticking out of an orc costume. With a firm hand, he passed it to Growl.

Bob said, “Thought so. There were hundreds.”
Farsigh’s ring finally fell into the world sea, and the sky-yacht sped into the darkness.
Slipping through wisps of cloud, the sails taut against the wind. High above, the pale light of their distant sun in the dark sky, just bright enough to cast the sky-yacht’s shadow onto the world sea far below.

(This piece, from the original story line, is interposed here as an Interlude, to introduce a couple of characters and locations which will appear in the new story line shortly. I have not felt the need to translate Bob's dialogue from the original New Zealandish.)