"About New Zealand, at last I am coming round & admit it must have been connected with some Terra firma; but I will die rather than admit Australia." - Charles Darwin (August 1863, an argument at Kew Gardens)
In 1836, Charles Darwin stood here and looked out from Govett's Leap. He tried hard to understand Australia, but thirty years after leaving the place forever, did not have answers to the questions he posed himself.
His diary of the visit records:
“In the evening we reached the Blackheath; the Sandstone plateau has here attained the elevation of 3411 ft, & is covered as before, with one monotonous wood.
— On the road, there were occasional glimpses of a profound valley, of the same character as the one described; but from the steepness & depth of its sides, the bottom was scarcely ever to be seen.
— The Blackheath is a very comfortable inn, kept by an old Soldier; it reminded me of the small inns in North Wales. I was surprised to find that here, at the distance of more than seventy miles from Sydney, fifteen beds could be made up for travelers.
— 18th Very early in the morning I walked about three miles to see Govetts Leap; a view of a similar, but even perhaps more stupendous character than that of the Weatherboard*. So early in the day, the gulf was filled with a thin blue haze, which, although destroying the general effect, added to the apparent depth of the forest below, from the country on which we stood.”
(* the name given at that time to Wentworth Falls) 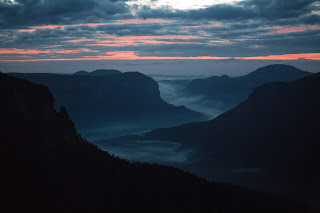 Sometimes it is the journey, not the conclusion. 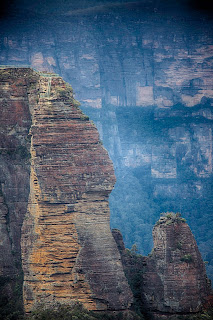 These images, taken from Govetts Leap Lookout, date to the end of the last drought, before the bushfire that ravished this area.
Labels: Falls wild