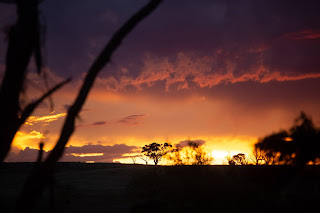 Lieutenant Casey held her position and watched Jon turn and walk back to his farm and shut the door behind him. Then she bent down and looked closely at the tracks in the sand. Her eye traveled from the scuffs in the sand to the disturbance in the bushes next to the road. She stood and pointed, "Blood on the branch. Collect it, fast."

She turned down the track and, at double pace, strode out to her staff truck and spread a map out on the vehicle hood.  She motioned to her comms officer, "Tell the platoon to stand by. Ready air support."

A glance at the map told her what she needed to know, "We have to stop them here."

From the kitchen window, I could see movement and barked orders coming from further down the road. Then I heard trucks starting up, and three-light army vehicles drove up into the high ridges, from where we had heard the howls earlier.

As those sounds receded, I saw a new army vehicle pull in beside Kathy's farm, and I heard another one pull up a little way from my place.  Three more traveled, at speed, and bumper to bumper along the coast road. Within minutes, a helicopter was flying up over the high ridges.

Breddi had feigned sleep throughout the excitement, one eye casually keeping track of which window I was spying.  When the sound died away, she gave up the pretense and tapped on the back door.

I told her that the officer had asked us to stay indoors, but Breddi was insistent.  When I let her out, she called me to follow her out onto the back deck. Wind was playing with the leaves gathering on the outside table. I hesitated, but then followed her with a heavy metal pipe.

From the back deck, I could see movement on the road near Kathy's place. The troops there were gathering a bonfire and putting up a couple of tents. I felt a fleeting sense of dislocation - perhaps I should offer accommodation but, why were they here anyway?

Breddi called and led the way down onto the leaf-strewn lawn, glowing gold and russet silver in the late afternoon sun. I told her again, "We should not be out here."

There was a muted cheer from across the creek as the bonfire near Kathy's farm caught.

Breddi ignored me and instead jumped to the small earthen grave. When she arrived, she turned to me and called again.

Suddenly there was the thump of muffled explosions from the coast. Shortly afterward, there was a long howl from the high ridges, followed by distant responses along the mountain. Another high scream from much closer followed these.

I was beset by doubt. What made such sounds? I suddenly remembered the damage to my shed door. What ripped doors off hinges? For a moment, I went into myself, into a place full of magic and dreams. There was a confusion of doubts and warnings. What was I doing following a cat? What had happened to the world since I woke up? How could the escape of a couple of circus animals unleash this type of chaos?

Breddi waited for me to move, but I was frozen. The late afternoon sun had caught the hint of a great spider web leading up into one of the nearby trees. I suddenly imagined ravers of every kind hidden around me.

Then Breddi sighed and started to paw at the grave. I told her to stop, frightened by what we might find. She looked at me with disdain and started to dig.

I tripped down the steps shouting at her, as the sun started to set and shadows crept across the grass.

Breddi reached into the hole she had dug and went deep. She dragged something out of the grave. Then she spat the dirt out of her mouth and turned to wait for me.

With tears running from my face, I raced towards her.