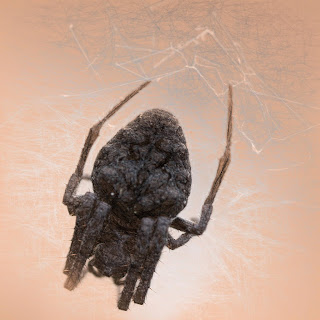 Anthem's face drank the sun. She tried to ignore the sound of ambulances coming and going and of children playing on the edge of the park. Finally, she shut her eyes harder, and the sun went away.

As it faded, she wondered why she had come back to Christchurch Park. Another voice tried to argue, but she quieted it savagely. She told herself that she had no other options: this was the path she had to follow.

She woke again as a small hand gently touched her shoulder and shook it. A young girl whispered, "Please wake up."

Anthem told the voice to go away. However, the voice was insistent, "Please wake up! Before they come back."

She was on the park bench, but the park was gone. For a moment, she thought fog was responsible, but as she swung onto her feet, she saw a web-bound tower in the distance. Her eyes followed webs in every direction. There were things on the web.

The little hand felt for her hand. Then, Anthem saw a young girl next to her. Anthem guessed she was about six, her hair a mass of tight dark curls, and dressed in a pair of warm overalls. Anthem asked her, "What are you doing here?"

The girl whispered, "I was playing, but now I am lost."

Anthem said to herself, "This was not supposed to happen."

"Shhhhh. Please, we must stay very quiet. Help me get home?"

Anthem looked at her tear-streaked face, "We will figure out a way. Are there other people here?"

The little girl shook her head and said, "No. I am Elsie. Who are you, and why do you speak so funny?"

"My name is Anthem. I come from a long way away, New York." And for a moment, Anthem let herself remember her apartment, bagels, the diner along the road, and her life, before... Then, a touch of anger appeared.

Elsie saw her face darken and said, "How will we get home?"

"I have been here before. I am trying to think of the safest way we can do this."

"We can't fight the spiders. They came looking for me. They are huge and fast."

"And you must have been fearless. How did you escape being caught?"

Elsie said, "I made myself very small and hid in a crack."

"My mother says that Christchurch has lots of cracks. We live by ourselves, in the cracks. So she will be worried about me getting lost. "

"Are there any cracks near here?"

Elsie said, "No. I was following footprints when I saw you."

"Where did you come from?"

Elsie started to point but then jolted with fear. In the distance, a colossal spider slowly rose into the air.

For a long moment, both remained still, frightened of any movement.

Anthem said grimly, "These Tipua don't sing. They are more like spiders."

In the distance, the spider stopped and, once again, started to rise into the sky.

Anthem said urgently, "I need you to be very brave."

Anthem tried another tack, "Have you ever wanted to fly?"

The little girl nodded, "More than anything in the world. But, now is not the time for fairy tales. The spider could eat us."

The little girl shook her head, "No, it's a spider. And it has lots of little spiders under it."

Anthem said, "Do you believe in magic?"

Anthem asked, "What about dragons?"

Anthem said, "I have a plan. But it depends on you. With a little bit of dragon magic, we will become the High Command. Some of your mother's special Tipua."

Elsie said, "Tipua is not going to help us here. I wish we had a gun."

In frustration, Elsie stamped her foot. Ripples of the sound traveled in a thousand directions. Finally, the spider turned to face them. Elsie let out a short scream as other spiders start to rise into the sky, all around them.

back to the Index to Dragons Eye II (index, characters, background, maps)

Elsie's mum has told Elsie of the Maori concept of Tipua. Elsie has hung onto this, after falling through the rift.

At different times, thinkers from all over the world have believed that life force fills all parts of our world. Recently, we have embraced technology, we have also accepted the concept of Gaia. Or perhaps, I should say, ‘reaccepted’ for this concept was not unfamiliar to sophists of Greece and Rome, and the other peoples of the world.

The Maori of New Zealand believed that life force could be attached to a stone, rock, tree, stream, mountains or high hills. Sometimes the attachment was created by misfortune, such as the loss of a companion.

“The tipua log known as Tutaua, that is said to have drifted for many years athwart the confined waters of Waikaremoana, possessed the power of singing. In the dead of night the mountain-folk would hear the weird voice of the enchanted log as it drifted across the troubled waters of the Star Lake, and would say, one to another, ‘Ko Tutaua e waiata haere ana’ (It is Tutaua singing as it goes).” (Some aspects of Maori Myth and Religion, Elsdon Best, New Zealand Government Printer, 1922)

A place that was Tipua demanded respect and, sometimes an offering. This was particularly the case for travelers, who might inadvertently offend the sanctity of the site. An offering could be a branch, or leaves, or a stone. Once satiated, the spirit of the place might provide good fortune to those who lived near, but travelers needed to be wary and demonstrate respect. If not, a storm or lousy fortune might arise.

“When people were traversing a strange district, a matakite (seer) among them would, we are told, recognize any tipua object passed on the way. He would see the guardian wairua of the place, and so would know the place to be the location of a tipua. ” (Best, 1922)

In building a new social media network, those fleeing the ruins of G+ (a social media platform established but then abandoned by Google) called their refuge "Tipua"