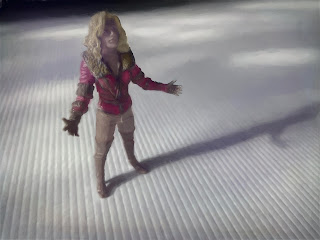 Storm clouds were gathering above them. Flashes of lightning lit a chaotic scene of spiders and webs.

Anthem went deep into her mind and shouted for Fire.

He swam into her eye, "You have not spoken to me since my father and sister died. You rejected me."

"You intend to get the old dragon lady to restart the timeline. If you do, I will never have existed. Therefore, I will not help you."

Anthem paused, "Yes. That is what I intended. But, we have a greater threat right now."

"Yes, I have been watching you talk to the little human girl. You didn't think about talking to me until you decided you needed my help. Why should I listen?"

Anthem bit her lip, tasting blood, "I cannot let the spiders kill the little girl or you or me."

"I do not accept that you have changed your mind. You have proved that you do not care about me. What you propose is dangerous."

"You can yell at me later when we are safe. Will you help now?"

"I have no choice but to help, or I will perish. This once I will help you, but I will not forget nor forgive you."

Anthem asked herself, "How has it come to this?" before turning to Elsie and refocused her eyes.

Anthem touched Elsie's nose with her own, and Elsie's eye opened wide. A shadow appeared in Elsie's eye.

Anthem said to herself, "I can't do this. I need more time". So she thought and then asked Elsie, "Do you remember your mother letting you ride on her shoulders? I need you to jump on mine now."

Anthem bent down as Elsie jumped onto the park bench and onto Anthem's back. Anthem felt small hands twine around her hair and legs encircle her neck.

Elsie looked at the first of the tiny spiders scuttling towards them and wishing she had wiped the shadow out of her eye. Then she felt another strengthening her grip on Anthem.

Suddenly, she became aware of the other, a young boy, inside her mind. He said voicelessly, "I am Fire, Anthem's unborn child. If we survive this day, we will become the most powerful beings in the universe."

Elsie said, "Whatever. I am Elsie and I am lost. Help me get home, and then we can talk about what happens next."

Fire said, "Shout with me, as loud as you can - 'Salve will give you wings!'"

For a moment, there was just the sound of scuttling as thousands of tiny spiders poured over the ground towards them and the thump of the larger spider legs striding.

Then Anthem's body exploded into a tangle of sinew and bone. Her back flashed in pain as massive wings unfurled. Elsie was lifted into the air and Fire struggled to get her back into position. Elsie became aware of Fire concentrating, shaping purchase places and bonds to tie Anthem and Elsie together.

Anthem staggered as her flesh expanded, her body twisting in pain as scales and talons appeared. Elsie wiped her hair from her eyes as Anthem sprang high, wings beating the air hard as she rose.

Wild exultation rose in Anthem's body, and anger ran through her blood. Finally, Anthem screamed her frustration into the sky.

Fire asked, a little uncertainly, "Have you ever ridden a horse?"

Elsie gritted her teeth against the turbulence, "Of course. Why?"

Fire said, "My sister, Ice, told me that riding a dragon is like riding a horse." He added, quietly, "My sister died."

Elsie said, "I play video games, when my mother lets me."

Fire was lost, "What is a video game?"

Anthem was rising steadily into the air, leaving the spider-strewn surface way below. From this vantage, the land down took shape. Instead of a formless land, they could see the ocean and a network of ten towers with associated platforms that extended from the depths. The spiderkin had colonized the platforms, throwing webs between the structures.

Their upward passage had them start to pass through wisps of clouds. Fire said, "Stop Anthem from going up into the air because if we go too high, we will die of cold and lack of air."

Elsie said, "You do it. Why did your sister die?"

Fire said, "I don't think I am strong enough to control Anthem. She is far more dangerous than any of the other dragons.  Besides, you are the rider."

Elsie asked, "Did your sister control her dragon?"

Fire remembered, "She was riding my father, Jon, but she was too little. Besides, when I get born and become a dragon, I will need a rider. So you need to learn."

Elsie gently nudged Anthem to slow and then hover in the storm clouds.

Anthem's head snaked, looking for detail below her. Smoke issued from her nostrils.

Elsie turned Anthem into a long gentle glide, "I don't like spiders either. The spiders do not belong here. From where did they come? What are we going to do now?"

They passed through the bottom of the cloud, dripping with cold moisture.

Fire said, "I don't know any of those things. I only know the memories my sister and I have found in our parents, Anthem and Jon. Now my sister and father are dead. So let's practice burning spiders."

Elsie asked, "Should we do that? I never met my father"

Fire said, "Of course. My function is to burn and destroy. When I grow up, I will burn many cities."

Elsie protested, "I don't know if my mother would approve. When you meet her, please don't tell her that. I am not sure she would approve of burning spiders either, they appear to be sentient."

Fire said, "What is sentient? I do not know what your mother would do, but I know that my mother has burnt spiders here before. She made a safe place to land. Let us make the place safe for us. Because we might come back here, we should destroy them all."

As the children discussed the meaning of sentient and other options, a fierce electric storm grew around them, so Elsie nudged the dragon towards the clear sky. Their path took them close to a large sky tower with four giant platforms. A large spider had coated the structure with webs. They watched the spider climb down the tower. Then it scuttled towards the edge of one of the platforms. Moments later, they saw a rainbow hit the platform. There was an explosion of light and a faint rainbow trail extended high into the sky.

Sea mist started to rise and coat the world in uncertainty.

back to the Index to Dragons Eye II (index, characters, background, maps)

Barbarians at the Gates is an allusion to our children, who will tear down our gates, and create the future as they choose.