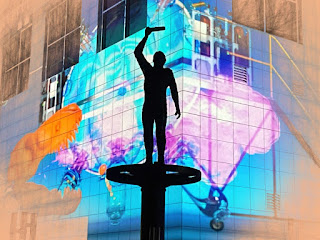 A speaker stands in the dim light. Anthem cleared her throat.

Her image flickered and then stabilized. Listeners on the benches around her in the great lecture hall ceased their murmurs. For a moment there was a shuffle of pencils and tablets, shoes and claws.

She started to speak, softly. Her eyes adjusting to the darkness.

The listeners bent forward, straining to hear her voice.

Anthem opened her eyes, touching every mind in the hall with a shard of wonder.

“Chaos and order in recent time and time to come.” Behind her, the view screen lit up.

“In the history of our worlds, other stars have almost collided. In relatively recent time there have been eight such near misses. Eight encounters between nine stars.”

The view screen displayed a simulation of near space zoning into each of the nine stars in turn. For a moment, Sol, the Centauri, Gliese 370 and the others burnt in the hall.

Anthem became a dark silhouette, filling the breach with her deep rich voice.

“These encounters were not catastrophic events for the stars themselves. The stars did not collide, although all around us are remembrances of earlier collisions. The neural networks within your minds depend on elements formed in long forgotten stellar collisions. The gold band you value above all else can only be forged in the collision of two neutron stars.”

Anthem stopped for a moment and remembered. She felt the weight of the gold band circling her finger. The screen was simulating an encounter between the G6 giant gamma Microsopii and the Sun 4 million years ago. The simulation paused as the stars almost met and then zoomed in showing how this affected local planets, moon, and meteors.

“For the systems of planets and moons around each of the stars, it is a different matter. Approaching stars disrupt ice chunks from distant belts. Some of the chunks settle into new orbits; some become erratic while others exchange one star for another. Others accelerate into inner systems, where they rain destruction on worlds capable of supporting life.”

“As the stars come closer, planetary orbits are disrupted. This disruption leaves some planets and moons reduced to rubble. At their closest points, solar ejecta whips between the passing giants, destroying atmospheres and life.”

The screen faded into darkness and Anthem reappeared.

“Neither my sun nor any of those with which she dances will be captured by another star. For now, she remains single. But each encounter has left chaos as a new order reasserts itself.”

“Like the breath of a lover, it echoes through time. It leaves its distinctive scars.”

“In Newtonian space, our day to day reality, on the surface of geologically inactive planets and moons, we can still trace and date the coterminous destruction wrought by the disruption. In our rock layers, the fossil record records mass extinction events.”
“These close encounters do not just create physical change. At a quantum level, the close encounters ripped small holes in the fabric of our day to day reality. The human scientist Einstein first postulated the existence of quantum entanglement (although he called it ‘spooky action at a distance’)."

“Simply put, while the stars pulled apart, the nine star systems remain entangled. This entanglement has left us with a legacy of similar genetic material. Life forms have converged. This process continues.”

“But you know all these things because the close encounters did not just establish points of similarity. They also created the points of weakness which are now being leveraged to destroy our worlds.”

“We must find new ways to protect our peoples.”

“I will tell you how this was once attempted and failed.”

She bent forward, suddenly timeworn. Her eyes dimmed, touching every mind in the vast hall with a shard of fear.

She paused. For a moment she was in a different place. On a yacht, moored at night on a perfect mirror river, with stars glistening on the water surface. She was lying next to her lover. She was explaining to him she was pregnant and watching his eyes widen. In that one day confident of her strength and power. Just for one day.

Her voice caught, and she continued.

“I will start by exploring one of the nine worlds, the homeworld of the Crest. The Crest call it Terrorfar.”

The image of the speaker flickered.

Far from the speaker, in the dim recesses of the darkness, ancient eyes opened and wept for her. The old Dragon Lady searched the minds of the other dragons watching and acted, sending a message into the past.
The present freezes, and then starts to unravel, back to the past. Back to the moment Jon and Gunadi arrive in the port of Eden. Back to the moment Anthem wakes, once more in the park across from the Christchurch Hospital. A place of weakness.

Notes: This piece echoes an element from Anthem's future. I explored time travel in the novel Catalyst. This explanation is provided from that book for those interested:

"We are all time travelers.

We are all equipped with basic navigational facilities: the ability to experience the passage of time and to anticipate coming events. We are not good at predicting coming events, and we do not learn particularly well from past events, even though we could with a bit more practice, perhaps be better at both.

Given our practical experience in time travel, it comes as a bit of a surprise that the discussion of time travel itself is relegated to the stuff of pure fantasy. At one level this is entirely understandable, those lost in imaginings about what might have been or what might be can become lost and unproductive. Still, there is a respectable side to imagining alternative futures, and we value those who can set out strategies to accomplish or avoid certain future events. Less valued is that advice that traces alternative past events.

Bertram Chandler’s novel Kelly Country (1981) was such an attempt, tracing an imagined timeline from a successful Kelly outcome at Glenrowan into a modern day history that, while mere fiction, illuminates realities and possibilities that we sometimes find inconvenient.

Here I have approached the subject from a different perspective. I have assumed that time has some of the normal characteristics we find in n-space, such as velocity and acceleration. I imagine two things flow from this concept: temporal velocity and time quakes. Time travel into a realm of future possibilities becomes a straightforward matter of giving a person temporal velocity. I imagine that the velocity is relativistic between observers and observed, both continue to experience time as an ordinary rate although the observed move away from the observers at a different temporal velocity.

In such a world time paradoxes do not occur. Instead, events occurring in real time (with the observer) are simply promulgated through time into the possible future. Changes are manifested by time quakes. However, time quakes only occur as a result of the actions of the observed on real time.

It works like this. A person sends an observer into the future. The observer in the possible future transmits the results of a lottery draw back into the past. The receipt of the information changes lots of things that send a shock into the temporal probability cloud, the time quake impacting on the observer.

A general theory of events

Intuitively we know that there are pivot events - where the actions of a few can have a dramatic down-stream effect. Some of these were just waiting to happen, and would have happened sooner or later (the gradual increase in wealth outside wartime, the development of new technology under the influence of competition). Others are unique, in the hands of a few and could not capable of replication (examples here might be the 1975 Australian Dismissal or, less obvious, the successful development of scramjet technology, or the Indonesian military reaction to Australian entry into East Timor).

In the short term, maybe individual events are unlikely to impact on individuals, the same people would meet, fall in love and have/have not kids. But over time, enough variability would be added to lead to different outcomes: nice Mrs. Brown down the street won the lottery and moved out, and new noisy neighbors moved in, bringing forward your plans to move interstate.

We are often told of the dire consequences of not doing stuff. Some of these are real problems, but we seldom go back and test these, instead, sensibly, concentrating on the future."