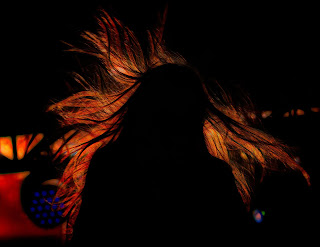 Labrinth was in the darkness, teasing dust.

She leaned down and blew the ground. Dust swirled all around her. Some motes climbed high into the air. As shafts of light falling from the high dome above hit them, she became briefly visible in the darkness.

She watched as the particles settled on the blast wall and start to tremor. They shivered in tune with the beat of the reactor twenty floors below.

She turned back to look at Mission Control. A little way from her, the center of the dome was a hive of activity. Mission specialists and their consoles were caught in silhouette on the high screen to the left of the command area. A grainy image of Catalyst was frozen in black and white tones on the screen, against a blurred background 39 years in the future. On the other side, the time gate cast waves of soft blue light that pulsed through over the curve of the dome high above.

She watched Station Commander Benedict take command of operations at the Command Desk from a junior officer. She imagined him, sunburnt and creased with recent stress, white knuckles at the com. She had been waiting for his return.

The loudspeaker system crackled with his voice, “This is Mission Control, our temporal distance from Catalyst is 39 years, 15 days, 5 hours. His velocity is steady at 1274 seconds per tick.”

He paused and added, “Here in Mission Control we are standing by.”

Labrinth moved in the shadows to a closer vantage. She saw Benedict hail Cannonball. A murmur of anxiety echoed around the consoles. She was not the only one waiting for their next move.

Benedict and Cannonball spoke loudly for the benefit of the surrounding teams. Benedict asked, “Early acquisition worked this time. What did we discover?”

Cannonball shook his head, “Nothing good. Analysts are working on it, but I saw a glimpse of an Island Lagoon map in the video feed. Catalyst might be trying to make his way back here. If the analysts confirm that, we need to send in Labrinth.” Labrinth grimaced and shrunk back into the darkness. She was hundreds of miles from anywhere. Stuck at a facility far out in the desert at Australia’s only rocket range, the space-port Woomera. Salt lakes in every direction. No television or radio. No rockets either, anymore. Just stars and, maybe, a softball game on the weekend. There were rumors that the American base nearby had a copy of movie Jaws and might invite people over.

Still, perhaps she was lucky to have any job at all. She was hanging on by her fingertips. She was a foreign affairs officer, in a year that had seen Australian embassies in a range of countries close with the fall of the South Vietnamese capital of Saigon and the descent into chaos of a dozen other countries. War was being waged close to Australia’s borders. Indonesian forces killed five Australian-based journalists during their incursion into East Timor. A sweet job in the Europe desk, fell through with riots when the Spanish dictator conceded that he was too ill to govern.

She started to drift again with feelings of anger about the way things were not turning out for her. The government had seconded her here: some obscure scientific group cobbled together from the remnants of half a dozen failed rocket programs. It was dull and deadly hot. Then, 11 days ago it all went wrong.

Now it was hot and deadly desperate.

Benedict walked away from his post. He was arguing with two engineers.

He reached a decision and motioned to dismiss the men. She thought, “They are all men, except for me.” He stalked back to the Command Center and flicked his mike and told all the specialists to take their seats. One of the engineers followed him and tried to talk to him, but this time the conversation was quiet.

Labrinth hesitated for a second and then circled fast in the shadows, avoiding the circle of consoles and flashing lights until she could hear the whispers.

Benedict was angry. He spat at the engineer, “And so that’s why we started to put power out onto the domestic grid? You have got to be kidding me!”

The Engineer stuttered a response. Labrinth recognized Brad. He took a breath and tried again, “Not my call. Treasury back in Canberra made the call. This facility is bleeding cash, and they decided to make it up. All I am saying is that if you take that much power out of the grid at the moment, you will drain the power out of every energy resource in 500 miles. My team tells me that it may take days to restore power. The politicians will go crazy. You will go crazy.”

Benedict, growled, “Ok, you made your point. I have no choice. But when I give you the call, I want every bit of power committed to this facility. Do you understand?”

Brad paused and then shrugged, “Yes. I have told you what will go down.”

Brad turned and walked over to the grid consoles, shaking his head.

Labrinth quietly withdrew to find more dust. She ignored the buzz of activity that grew as the facility moved back into radio range of Catalyst. She was thinking about what this meant to her.

In the past 11 days, the same process had repeated itself 40 times, once every 7 hours. Just six hours of downtime; not enough time for real sleep. Then 60 minutes of finding Catalyst, searching target areas and locking onto his artifact, trying to get scraps of early acquisition video feed, and starting to transmit him short real-time messages. The messages from Mission Control were highly compressed. Catalyst’s time ran far faster than time here at Mission Control.

The Mission Control messages all took the same form. They pleaded with Catalyst for information. In the beginning, he sent back useful information. More recently, his messages did not make sense. Sometimes they would be able to guess a word or two from the video feed. Then, the radio window shut.

At the point of optimal contact, there would be a short period of 86 seconds when the central screen would spring into life. The massive screen would come to life, a couple of grainy images at a time and then a sickening roller-coaster of images almost beyond comprehension. Then they would lose signal, and the specialists would pass the information they collected to the analysts.

It was fascinating at first. Because of Labrinth's connections and experience, Benedict kept her in the loop. She helped compose the messages to Catalyst. But the failure to get any meaningful responses from him for the past six days was starting to press on all members of the command.

Then suddenly, it had all changed. One of the teams worked out how to send someone to Catalyst.

Labrinth frowned. Cannonball should have gone, but they were still worried about the impact of the initial time trials on him. So, Labrinth got the job. Partly, because of her past work in intelligence gathering, and slightly because she knew how to use weapons.

So she suited up and went, through the blue time gate, into the future. She shuddered, feeling the cold metal of the artifact around her neck. They would leave her 3 Mission Control ticks before pulling her back, after an hour meeting with Catalyst, in the future.

She stopped. Unconsciously she spent a couple of seconds feeling for her revolver, ammunition, a small backpack of stores, currency and gold.

She remembered the argument before coming back to Mission Control twenty minutes earlier. She and her support team had disagreed about what she should wear. She had carefully described dress style from her previous insertions, but no one would help her remove the flair from her jeans. Finally, she cut them off herself. She walked into the circle of light.

Cannonball looked down at her cut down jeans. He looked at her and frowned an unasked question. Then they walked with her towards Benedict.

Cannonball murmured to her, “He wants you to stay in the future for a full cycle. He doesn’t trust Catalyst anymore. I think we are just tired and frustrated, but he thinks Catalyst is going to do something stupid. Whatever. I want everything you can find us about our near future. The information we have is useless. Benedict wants stuff from the period Catalyst is in; we need intel on the hard stuff, weapons, and coms. And I want Catalyst’s artifact back: we need to find out what went wrong with it, why we cannot get him back.”

As they came up to the coms station, Benedict looked at them and broke in, sputtering, “Try to find a way to get Catalyst back, but if you cannot, keeping you safe is my priority. Anything else, including Catalyst, is expendable. Your mission will take 12 months. Get me my data. Do not get yourself killed. Do not lose the artifact. Any questions?” Labrinth processed “expendable” and nodded.

Cannonball said, “You have trained for this. You can do it.”

She took a step back, feeling the tremors from the reactor beneath her.

Cannonball stood next to Benedict who flicked his mike. A crackle echoed across the dome. Instantly, the other 40 people around the room quietened.

As Cannonball called off each of the service groups, the team leaders shouted a response.

She has seen the grainy pictures the analysts had data mined from the future. Cityscapes changed beyond recognition. A world population that had almost doubled. There were new political boundaries that made no sense. Wars were taking place in places unheard. Unreal images of spaceships, robots, and monsters appeared without explanation. There was technology she did not understand. She thought, “This time, I have time to make Catalyst explain.”

Suddenly she saw stars. And then they started to move towards her.

The reactor tremors became waves, rippling over the floor.

Then the world disappeared.
Return to INDEX
Labels: Catalyst Novel