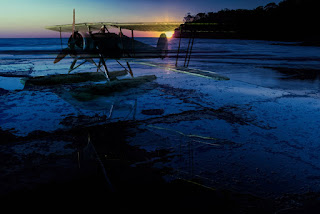 David took Labrinth to a small cafe where she ate slowly fighting sleep. Suddenly she started. Momentarily confused, she lifted her artifact to her ear and flicked the receive toggle. After a moment it went dead, and she turned to David, “We will meet my organization in T plus 1000 minutes. We will be out of action for about a day. Have we time to get to your flat and get ready?”

David asked, “T plus 1000 minutes? You are not making sense. Do we need to travel to them?”

Labrinth yawned and smiled, “As for 'where,' we have to get into a clear area. As for 'when,' the meeting will be exactly 1,000 minutes from when I said 'T.'”

David said, “Ok. So, what time would that be, girlfriend?”

Labrinth smiled, “I thought you might come in handy. We need to be at your place tomorrow morning.”

They left the cafe and went to David’s bank and made a couple of deposits. Then they headed out on the back road to the coast. Labrinth had never been that way. They drove to the edge of the mountain and then along sharply winding road down sheer cliffs. She sat on the back of the bike holding him tightly with her eyes wide open.

David stopped at one of the cut-backs. They walked to the edge and sat for a moment, their legs over the abyss, and the sea-breeze in their face.

While they sat, he pointed out the beaches they would be surfing at over the next week. Labrinth watched a ship working its way up the coast, and listened to the words David spoke without hearing them. Something snapped her out if it.

Back on the road, when they reached the flats, he opened up the throttle, gently and deliberately driving the way.

She leaned into him feeling the Earth move.

Outside Nowra, they tracked into a side road and through the open gates of a property. He shot past an old two-story house with a commanding view of a bay and then down a rough track to an old boathouse at the water’s edge.

Moored on the water were three sea-planes. She recognized the make of one of them, a yellow two winged Ag-cat. Exhausted, she put aside questions of why the future would still be using old aircraft.

But Labrinth was almost asleep. He had to half-carry her into the converted boathouse and up the stairs into his bedroom. Despite his warning, it was not too much of a mess.

He settled her on his bed, saying, “Goodnight, Agent Labrinth.” When she did not respond, he slipped off her boots and covered her with a sheet.

Downstairs, he rummaged through his fridge for a beer and tuned to his sports channel. He consciously turned the volume down to almost silent.

He logged onto his laptop and flicked through to his social media site. On a whim, he went to his relationship status. He considered the options: “Single,” “It is complicated” or “None of Your Business” all seemed good choices. But they did not quite fit.

In the space of 24 hours, he suddenly had a paying job and a girlfriend. A girlfriend who was more of a mystery than a girlfriend. Without much further thought he changed “Single” to “In a relationship.” The truth was, he was pretty sure his ex, Mary, kept an eye on this and there was still a bit of pain there.

He drifted off to sleep on his couch with the sounds of waves lapping quietly. The lights dimmed automatically.

During the night, Labrinth woke and spent a moment looking at the boathouse. She found him asleep, his laptop on with a couple of windows open, music videos playing in one. She finished the glass of water next to the couch and looked at the computer screen again, her mouth open. Then she climbed onto the couch and folded into his back.

He lay, with his eyes open, feeling her behind him, breathing gently. He wondered where she had come from before he went back to sleep. He stirred as kookaburras called the dawn.

She said, sleepily, “Stay... please. Just like this. I haven’t slept like this in a week. I am still asleep.”

“It is morning girlfriend,” he twisted to face her to see if she would react to the breach of protocol.

She shut her eyes tightly, “No, it is still night.”

He reached over and hit the console. The curtains around the front of the old boathouse swept open, revealing full-length picture windows facing out onto the bay. Stars were still in the sky, but tendrils of early light were catching the breakwater in the distance.

She disappeared under the sheets; her eyes shut tightly.

David murmured to the sofa-bed, “Stay here. I will fix coffee and breakfast. We can eat on the deck and watch the sunrise. Best time of the day”.

He sprang over her and slid open the doors to the deck. He called his cat and then padded to the service area at the back of the old shed. She raised herself onto the flexible arm of the sofa, looking out onto the bay.

Along the nearby pier, silhouettes of a trio of float planes and yachts superimposed in impossible shapes. She watched for a moment, the light on the horizon gradually building in among the clouds. She wondered what type of railway coffee David was about to serve up, and whether she should ask for tea instead. The light from the service area cast enough illumination to show the gaps between the floorboards, and the lapping of water matching little wave crests.

She became aware that she was being watched. She raised herself a little higher and met the eyes of David’s cat. A large black male, he shut his eyes and disappeared into the service area, loudly complaining about the new visitor.

She sank back down into the warmth of the sofa bed, half-listening to the sounds coming from behind as the smell of leather. She shut her eyes and started to doze until coffee and toast called her to wake up.

He came out taking the stairs fast, and she heard the sounds of a brief shower before he came back down, throwing her a towel, “Breakfast in 5 minutes”.

She took ten, dressing in her new gear. David was already out on the deck, the pale light flooding the horizon with music playing softly in the background.

“Looking good,” he smiled. “Just in time. Sunrise in a couple of minutes.”

She sat, “Thanks. Nice place. I was not expecting this from your description.”

“It is a bit of a backwater. I have spent most of my life trying to get away from here. I did my degree at Wollongong, but there are no jobs here.”

“What did you study?” she asked, wondering why the coffee was so frothy.

The conversation was interrupted as Patroclus jumped onto the table and with a quick look at her, grabbed a piece of bacon and disappeared.

David shouted at the cat and for a moment chaos descended on the scene.

A voice from the nearby pier. “Hey! Keep the noise down. You are scaring the fish.”

David jumped up and turned around as a senior man with a fishing rod emerged below from the darkness of the pier.

“Oh, I am sorry, I didn’t mean to interrupt your breakfast.” His father’s eyes rested on Labrinth briefly, “Smells good.”

She spoke, “You are not interrupting. Come and sit down.”

“I will be missed up at the house. Come up later and say hello.”

“Wait, Dad. I want you to meet Steph,” David said.

“Good to meet you Steph. People call me “Chas.” I will not come up now; I smell of fish bait. David, bring your friend, Steph, up for lunch or dinner.”

“Probably be tomorrow. We are going to do some surfing,” David said.

“Nice to meet you,” Chas turned to her, his face still in darkness, “Steph.”

He started to trudge back up to the main house, whistling as he went. The sun emerged over the horizon, painting the morning gold. The clouds along the horizon took on silver edges. Suddenly, the yachts and float places were illuminated, bright colors with deep shadows.

David looked at her, “That was not so hard.”

She was still looking at Chas ambling, his shadow already reaching the house. He looked old. She turned to the float planes. On the fuselage of the yellow bi-plane, the word “Cannonball.” She murmured, “It can’t be...”