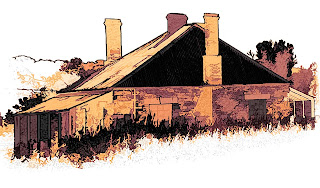 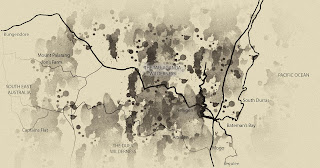 I woke just before dawn in a peal of laughter from the tribe of kookaburras camped in the gums outside.

Dream trace lay heavy on me: a scatter of heavy wings and high delighted laughter. I shut my eyes snuggling deep into the warm flannel, hoping to catch it before it disappeared.

Instead, something hit the flyscreen. I opened my eyes, suddenly awake. In the early dawn, a large furry cat sat on the sill, looking at me. It jumped away before I could ask its name, taking my dreams into oblivion.

Early morning light lit soft pink and apricot clouds beyond the gums. The window opened onto a view of the creek and, in the distance, a neighboring stone farmstead and stables. I could feel the sharp taste of frost in the early light. First light stirred a breeze and late leaves fell from the great ash.

Unbidden, a hundred small doubts flooded my mind. On the bedroom walls, fantastical images painted years earlier started to take shape in the early light. I realized that I was waking in the guest bedroom, but I could not remember why I went to sleep here. I could remember bringing Storm, Kathy's daughter, cups of tea as she sat here, patiently painting each wall of the guest room before the last great drought, but last night was a mystery.

In the distance, Kathy's stone house was unnaturally dark. She was usually up well before dawn. Kathy was off grid. She lit her kitchen fireplace, summer and winter, and morning smoke trailed high in the sky. There was a fey smell in the air, perhaps a sign that I needed to air the room.

In the half-light, I caught one of Storm's images. I remembered it as a picture of eyes tucked to one side of the window onto the veranda. In the half-light, I noticed, for the first time, that she had underpainted the eyes with fluorescent colors that were still faintly glowing - a rain of tears.

I started to lose track of time as more questions began to pile on me, and the need for coffee became more pressing.

Suddenly there was a clap of thunder, and the roar of jets passing low shook the farmhouse.

That was one bridge too far. I kicked off the sheets and attempted to stand unsteadily. I felt weak to the bone and almost fell. Outside, the morning light had lit my farm grounds in a shock of autumn colors. Sitting on the bonnet of my truck was the black and white cat that lifted her head as she saw me.

Something at the back of my mind asked when it had become Autumn?

I tried the light switches, but the power was out.  I threw on some clothes and walked carefully to the kitchen to light the old Stanley to boil water. On the way, I briefly opened the main bedroom door but shut it just as quickly. It was a mess, and there was the impression of webs and scuttling.

In the kitchen, the nests of my two cats, Blanket and Waylander, were cold.

I made a thick brew, drank it black, and then went back for seconds.

As the sun started to shine, I went out onto the deck, noting, again, that Kathy's farm still showed no signs of waking.

Under the influence of caffeine, I started to weigh all the pieces. I seemed to be stiff, thinner than usual. Perhaps I was recovering from a bout of the flu. Apart from the loss of power, explainable, perhaps by a mountain storm, I tried to tell myself that everything seemed normal. I just needed not to overthink things. I had a ton of work to do:  mowing, piling leaves, cutting wood, catching up. I needed to get the power restored; perhaps a trip into town. Maybe, I should call in on my doctor. Perhaps, on the way, I could drive past Kathy's place and check she was ok.

I had started to settle down when the black and white cat jumped up next to me and almost gave me a heart attack.

She made herself comfortable, batting leaves off the outside table, while she stared at me.

But I wasn't looking at her. In the grounds below me, my eyes had settled on a small patch of recently dug earth. Someone had placed a small wooden cross in it. 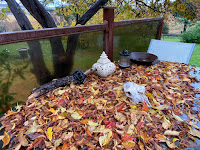