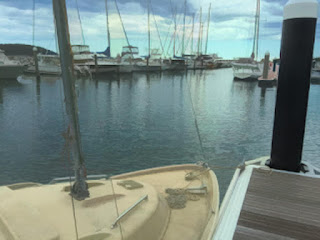 It took a while to get to sleep, and I woke before the kookaburras. I set the fire and boiled the water, intending to bring hot coffee or tea to those stationed outside my farm gate. I felt guilty that I had not offered even basic hospitality.

Before I could pour the coffee, there was a sharp knock on my front door.  I looked at Breddi, who was pretending to be asleep.

I opened the door to a young military officer in a uniform I could not recognize. He introduced himself as Letnan Dua Sijabat, an Indonesian airforce officer working with our army. I invited him in and asked whether I could offer other members of the group breakfast or some further assistance. He told me that Command had called the others further into the mountains. Command had asked him to stand watch and collect as much intelligence as might be had.

We sat and shared tea. He introduced himself less formally as Gunadi, explaining that several Indonesians had been involved in joint exercises with his Australian colleagues when the troubles started. He warned me that his English was not a strong point, but I could fault neither his understanding nor the fast quick smiles in his eyes. Before long, he had confided that his family came from a highland farm in Java and that he was interested in anything I could tell him about this part of the country.

For my part, I was frank. I told him that I thought I was recovering from some fever that had left me without much memory of the past couple of days. As I spoke, my eyes strayed to the wallets sitting unexamined on the sink, and I added that some of the pieces didn't add up.

With a smile, he watched my confusion and then gently pressed me to have a closer look at them. He saw momentary hesitation and gave a sympathetic nod, "Perhaps you can show me your orchards and pastures first?" His smile was infectious.

Gunadi had a thousand questions as we walked around, with Breddi in the lead, until we got to the damaged shed. He held his hand out and brought us to a stop. Breddi screwed her nose up. He asked, "Can you smell that?" It was faint, almost imperceptible: a fey smell of decay. I nodded, "I smelled it a couple of places yesterday."

He looked at the door lying askew, ripped from its hinges. Then his eyes search the ground around. He pointed to a depression in the background and an abandoned spade nearby. Finally, he said softly, "Can you remember what happened here?"

I was confused. I should have known.

He said, "Let me tell you what I see here." He looked at me directly. "I have been watching you very closely all morning. You are showing all the signs of a serious concussion: memory loss, red eyes, shaking teacups, the way you are holding your head and shoulders, the way you speak, and your confusion." He said more gently, with his hands spread, "And here is where it might have happened. I think you came here, with that spade, to investigate noises in your shed.  I think you were hurt here."

I felt the energy in my body start to spiral away, and Gunadi stepped over and took some of my weight. "Let's get you back inside; you need to see a doctor."

I wouldn't say I like going to see doctors, and I sometimes think that the feeling is mutual. But this time, I felt that Gunadi might have knocked the nail on the head.

He looked grim, "I was hoping you would tell me."

I shook my head, feeling miserable.

He continued, "I think you caught a glimpse of one of them yesterday."

He kept a neutral face, "The damage to your door and the prints suggest something bigger than a dog. But, in the face of the unexpected, we reach for those things we can understand and explain: things that make sense. And sometimes, that helps to contain fear and allow us to deal with the situation."

I said and immediately regretted it, "I sometimes see strange things up in the forest."

He laughed, "The world is a big place. I see strange things every day. If it helps, we found a note near one of the farms nearby. It looked like it was fairly recent. It talked about one of the farmers seeing something, maybe a dog, on the edges of the forest."

I started to thank him for his help, but he held up his hand again and said, "Let me radio my report. We need to get you mobile and off to see a doctor. But if you were able to make a little more tea, I  would much appreciate that.

I stirred the coals and filled the kettle. Gunadi went out onto the deck, and I heard him talking to several people. While the kettle started to simmer, I scooped up the wallets and other bits and sat down to look at the haul.

My wallet was unexceptional. I paused at the second wallet and turned instead to the cigarette lighter. It had a cactus on it with the words "Grand Canyon Diner." I turned it in my hands, trying to remember it. Then, a cold icy pain started in my head, and I gasped.

When I looked up, Gunadi was looking at me, "You ok?"

"I can't remember why these were buried in my garden."

He smiled, "It will come back to you." He sat down and sipped his tea with relish.

He looked at the wallets, "Can I look?"

For a moment I hesitated, but then nodded. He looked at me and then pushed them back to me, smiling, "Talk to your doctor about these. If you need to tell me anything, tell me then."

He had another long sip, hardly able to contain his news.

"I have some good news. I am coming with you. We have found your boat, and we have arranged a top-notch doctor for you to come to see when we are down there."

"You told me your boat was missing. You told me its name was "Just Add Water."  Marine Rescue has reported your boat is at Bateman's Bay."

(image: the yacht "Just Add Water" moored at the Marina, Bateman's Bay - we briefly met the yacht in the Prequel )