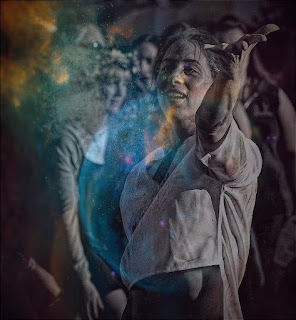 Later, in a little town 20 kilometers off the freeway, in a beautifully furnished split level motel room into which she had tempted her new biker friend for the night, she kicked off her shoes and reflected on her day.

The biker, tied up tightly with torn bed sheets, glared at her but had learned much faster than the car not to offer comment. Before she had bound and gagged him, he had shown her how to turn the lights down, put on quiet music and run the spa.

They had also watched a brief news report which showed some of her adventures and the fiery death of the yellow car as a service station exploded. She told herself, “Catalyst cannot miss that. He will be looking for me.” Then she frowned, “Maybe.”

The news report generated other anxieties. In particular, it had initiated a brief discussion that had left the biker in his present uncomfortable position. She had taken his wallet, keys, and all his cigarettes.

Still, she shared a smoke with him. She was not a naturally cruel person.

Earlier, he would have told her how to make the bubbles in the spa work as well, but she had put her finger to her lips.

She was feeling terribly tired. Her initial enthusiasm for ringing the bell was starting to wear off, and she had to learn how to work the spa herself. Afterward, she sat down with him again.

Labrinth said, “So, your name is David Moss. And you live in Nowra. Nice place. So, what are you doing over here?”

She paused and looked at him. The biker was lying on the floor, tightly bound and gagged. He returned her stare trying not to move a muscle. His eyes dilated with fear, his mouth dry and sore.

Labrinth continued, “You are very quiet tonight. I like that. Play by my rules, and you might make it through.”

She jumped up and went behind him, and started to undo the gag. She whispered, “Make a sound, and you will regret it.”

She came around in front of him and smiled. She had the contents of his wallet spread in front of her. She asked again, “So what are you doing in the Highlands?”

David coughed, his mouth dry. He tried to speak, but only twisted words came out. She gave him a sip of water.

He looked at her, “I just came for a ride. To meet some mates in Bowral. Maybe stay a couple of days. Look for a job up here.”

She pointed to his wallet, “So explain this.”

He thought carefully and said, “That is my wallet. My dad gave it to me.”

She nodded and picked up one of the cards she had organized. He watched as she lifted it to her face and rolled it, watching the hologram on the surface change shape. She looked at him and waited. He froze. After a moment she said, “Good boy. Explain this. Pretend I do not know anything.”

He said, “It is my driver’s license. It has my name and address. And my photo.” She waited.

He said, “It lets me drive trucks, a car, and my bike. You use it to prove who you are.”

He tried not to think what was happening, remembering the grip she had him in and how she had knocked the wind out of him in one swift punch, the gun in her hand. He said, “Got it at the motor vehicle registry. After tests. Had to pass a driving test for each type of vehicle, show them my birth certificate.”

She paused, thinking. She put the card down, pushing it gently into the gap between the other cards.

Quietly she questioned each of the other things in front of him, stopping every once in a while to give him more water. When they finished, she lit a cigarette and shared it with him.

She caught his eyes in hers, “You think I am mad, don’t you?”

He froze again, “I don’t understand you.”

She went to the mini bar, and opened it, “So how does this work?”

He said, “You drink what you want, and they charge you. It is not cheap.”

She selected a bottle of wine and smashed the top off.

He convulsed. She looked at the bottle in her hand and then smiled, “I don’t much like wine.”

She put it to one side and picked out a beer. She came back, this time coming in very close, “You got a girlfriend?”

His eyes avoided hers, “She left me.”

She said, “So you are looking for work and a girlfriend.”

He shut his eyes and shook his head, “Just a job.”

She said, “Good, I will think about that.”

She placed something over his mouth and nose, and everything went blurry.

He dreamed. He was working in a pub, up north. An old pub, the smell of stale beer and cigarettes, and the strike of balls on a billiard table and a patron who hit the bar to attract his attention. Gradually the dream became the bright light of day and someone knocking on a door. He lay, confused unable to respond, listening to the rattle of keys in the door and then the scream of a woman.

Someone was standing in front of him. An old woman, gray hair, bent. She was agitated, “Wait, I will get you out. What happened in here! Were you robbed?”

She came back with a blunt knife, flustering as she tried to cut the sheets off him. She was painfully slow, and she talked the whole time, “What happened to that lovely young woman? She told me to let you sleep in, and bring you breakfast later. What did she take? Wait, I will get you out of this and then call the police.”

The gag was off. David shook his head. The last thing he wanted now was a day with the police. He shuddered, “I am ok. I can’t explain this. I am sorry about the mess but, please, no need for the police, I will be ok. I will pay for the damage.”

His wallet and money were still all in front of him, nothing missing. And then he had a thought, “Did she take my, our, bike?”

The woman was still fluttering around trying to get the last of the bindings off him, “Your bike? Is that the one that was outside the room here?”

His spirits sank, but she said, “It is still out there. Your girlfriend left in a sports car after she had breakfast.”

He smiled and looked at her. She must have been in her 60s, face creased in concern for his predicament, “Thanks. This is embarrassing really. This has never happened to me before.”

She shot him a disapproving look, “I see all sorts of things here. I don’t judge. You young people, you take so many risks. How about you get fixed up, you could do with a shower, and I will make you some breakfast and bring it back. Doesn’t look like much damage here, just a couple of drinks from the fridge.”

She picked up all the bits of the sheet and tucked them away in one of the compartments in her apron. Her eye caught the jagged edge of the wine bottle, “Oh my, please be careful; I will clean that up when I get back.”

David let his breath out and shook his head. He took a moment putting his wallet together. He flicked on the TV, turned over to a sports channel and ran the shower. In the shower, he said to himself, “No way is anyone ever going to believe this. No one.”

He took his time. The apartment had been cleaned of broken glass and cans before he got out. It was almost like last night had not happened.

The TV was replaying the chaos from the previous evening, with excited witnesses describing the gun and the danger. He saw her face on the screen, inside the compartment of the sports car. Unmistakable. A cold sweat broke out over his face.

The bed had been pulled up. He saw a package on the bed and hesitated. Curiosity got the better of him. He picked it up and then opened it. The smell of the drugs hit him before he saw them. A couple of months wages in a kilo bag. On the outside, scrawled in black ink, “To David, Thanks for the night. Will see you soon. Labrinth.”

He looked at the food and felt ill and confused.

There was a knock at the door. He jumped.

The knocking paused, “Mr. Moss, room service. Can I come in please?”

He froze and then, as she started to knock again, he bundled the drugs out of sight.

He said with a mixture of relief and annoyance, “Come in.”

It was the old lady. But she was different this time. She was carrying a tray of food. Instead of being bent and stiff, she moved fast. She laughed, the laugh of a young woman. She said, “Well boyfriend. Eat up; we have a way to travel this morning.”