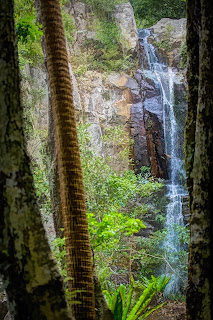 This 100m (300') fall is in the upper reaches of the Meme Mora (the river of many fish, today anglicized as Minnamurra). It is part of a series of drops that end in a plunge into a deep slot canyon. For many years it was locked away, and I romanticized it, frustrated that I was being denied a treasure.

Moving water, particularly waterfalls, triggers an interesting mental response. The mind does not just visually identify the waterfall, but it also commits resources to predicting the flow, speed and risks associated with the fall. When we leave a fall that we have studied, we often cannot recall a 'snapshot' of the location. Instead, for a moment, our minds had became the waterfall.

If just for a moment we can become a droplet in a great collective of water, perhaps the droplet can become us as well.