Summer 1867 - Boundary of Boloco Station and the Snowy Mountains 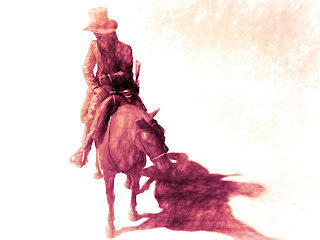 The Long Tailor tightened his grip on the bridle, and the chestnut slowed, and came to a stop. One more day.
Ahead the land rose in front of him, in every direction. He paused, then spun the horse around and looked back across the plains from where he had come. Once more he cursed that English toff, from Boloco Station – the one who would not share a drink with him.

He winced, but held his position, carefully looking back into the distance, watching for any sign of pursuit. Finally, when satisfied there was no unexplained rise of dust or flight of birds, he relaxed and reached into his coat for a tote of rum. Drinking deep, relishing the bite of the alcohol.

He turned the horse back to address the mountain.

The morning was still, and the heat was starting to build. The horse danced and snorted from the ride from the station.

A flock of galas rose from the line of trees and flew up, into the wisps of clouds forming around the mountain tops. For a moment the mob and the clouds formed a long trail. He shook his head, but the chance image of the Milky Way persisted.

He remembered the stories of the unseen river in the sky. The Yuin created songs and song-maps to guide them through the bush country – the legends indicated that they did the same in relation to the sky – treating the features as almost natural – identifying risks and benefits of particular paths. A bit like the mountain creeks, that image, small whirlpools of cloud forming near the peak tops. The old legends warn of the need to avoid whirlpools in the sky.

He shook his head again and let the bridle loose. The chestnut danced.

The police were all behind him now. Now, just friends and his mother’s people ahead.

He was on his way to meet the Irishman Kirwan at the top of the mountains and then be on his way to Gippsland and a new life. With a little luck, a farmhouse in the future. And Kate.

On his last day on Earth.

*
Fragments of his story can be read here.
Image: Modeling the Long Tailor from kits from MB Ltd using Topaz