One of the joys of visiting a fall at time of high and low water flow is that you can study underlying rock structures in a dynamic environment. These focal points are a goldmine of geological history - but they are also home for other human activity. Early last century, men and women carved their names into waterfall walls, confident of immortality (or at least infamy). This ugly practice has (fortunately) died out, but it leaves the intriguing possibility that far older messages were similarly once sent into the future, in the form of small rock sculptures.

One possibility is half way down the first W-Tree Falls plunge. Here are images of the wall in different flows. 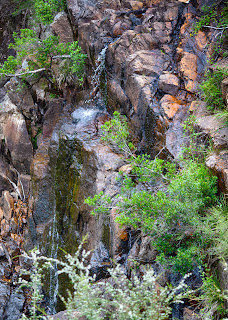 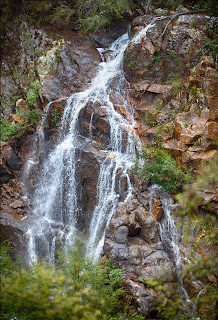 As i have traveled to more remote falls, i have seen many structures that seem to represent local totems, and sometimes resonate with older first people dreaming from the area.

Careful study of the rock face here discloses an anomaly: suggesting one of the focal points of the waterfall has a carving. 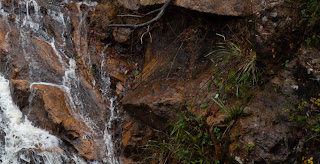 In the insert picture, the outline of a platypus (lower right) can be seen (look for the 'eye').

Developing an image of the fall in low flow confirms the image (which is sometimes partially hidden by flow), and provides a tantalizing glimpse of a second 'baby' platypus peering from beneath a rock behind the main statue. Other animal child/parent pairs can be discerned within the fall when the low flow image is redeveloped to drain color and enhance edge detail. 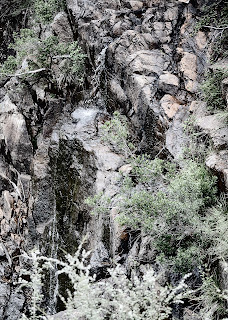 Time does not only disclose human activity or geological insights.

Time differences need not be measured in months or years, but can be contrasted in shutter speed. The first in the next sequence from Paddys River Fall is a long exposure (catching the flow of water) while the second is very fast (catching droplets). 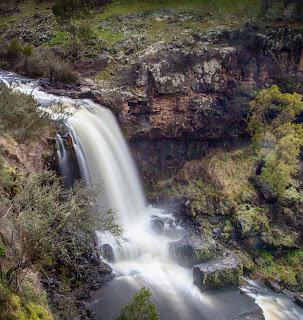 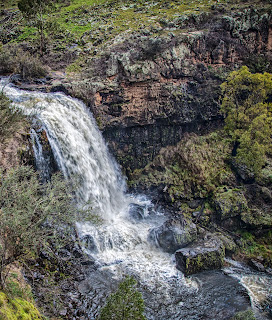 If you sit by a waterfall (or any fast moving water) for a while, some scientists tell us that you will build a complex model of the flow in your head: you start to perceive the fall as a ‘dynamic model’ rather than a snapshot of individual droplets. You can try this for yourself at home in a shower.

It appears that our appreciation of a fall of water changes, depending on how long we look at it (and might be why some people like long showers).

If the glance is momentary, we see it first as individual droplets (we can duplicate this with a high speed shot, catching bits of water in flight).

If we look a little longer, we start to see patterns. For example, we may see a ‘wave’ falling down the fall (we can capture the wave and give an indication of movement by a mid-speed shot - the time will depend on the light at the relevant spot.

If we look even longer, our perception changes radically. Our mind attempts to reconstruct the water fall as a dynamic model. While the eyes continue to provide images, these change the model rather than provide a ‘snap shot’ appreciation of the waterfall (we duplicate this by long exposures). Still, cameras, still and video, captures falls quite differently to you or I: they cannot replicate the actual experience.

I cannot confirm this - sitting by a fall (or in the shower) for any length of time leaves me feeling dreamy. But I like the idea in the theory above that, if you sit and watch a waterfall for a little while, for a moment you become the waterfall. In processing some long-exposure images I am struck by the symmetry between the fall and nearby mosses, lichen and roots. It seemed they were trying to become the waterfall as well.

I do not like using a single approach to waterfalls - but dislike long exposures as a matter of course. There is too much else to see. I like many waterfalls and pools because of the harmony between the rocks and water. I also see a degree of permanence, which gives the place integrity. The flow of the water brings clarity and brightness to the scene. It is good to watch for a little while, and only take pictures after you come to a view about which method is right for the place. Most importantly, return from these places feeling healthy and alive, and not anxiety riven, concerned about whether the shot worked out.

Long exposures and waterfalls have another downside. Long exposures work by capturing the water flow over a longer period of time (by darkening the lens with a filter). For example, an image might be taken over 2 seconds, rather than say 1/100th of a second. Around waterfalls, because of the wind created by a fall or vibration from the fall, long exposure vibrations introduce errors into the image.

Sometimes long exposures are right for the moment. They can fall prey to focus issues (focus is always tricky when you are on the top of a waterfall), and wind/vibration blur. To overcome these I sometimes image the water and cliff face as a series of long exposures (with ND and CPL filters) while the foreground will be imaged as a series of 3 fast HDR shots without the filters (to capture the swirls and bursts on the boulder face). I will sometimes develop with VSCO film emulation Fuji Fortia SP Landscape, with reduced saturation of 25% to restore some of the contrast between rock walls and waterfalls (and then finish with NIK Define2).

When I die and claim my life insurance, I am going to get some good lenses. I feel foolish dragging around all the heavy cameras and yet getting good pics on the phone. However, while phone cameras can give great pictures in good light, most just don’t do so well with dark scenes.

Of course, you have to die first to get the good gear:( Around waterfalls that is easy. Still, it is not the fall that kills you, but the sudden stop. Having regard to wind resistance, and depending on what you ate last, you might be looking at 6 seconds with one of the Blue Mountain escarpments. Which might be long enough to check wiki and invoke a dropped turtle (or hare, can’t remember which now) first and rely on pure mathematics (* not Floyds algorithm, the other one) to fall into smaller and smaller moments of time, to evade the sudden stop.