To the immediate south of Sydney, an escarpment give rise to its own river system, protected by the Royal National Park. 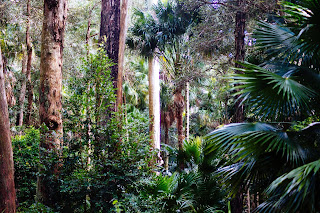 These waterfalls were given early emphasis by the railway to the town of Waterfall. At first there was tremendous excitement about these falls, so close to Sydney. The excitement fuelled the building of roads and trails in the park, an excitement that has waxed and waned.
In truth many river falls on the mountain and highlands on the Australian seaboards. Many rivers here will have a couple of falls simply because of the amazing drops (eg, off the eastern  escarpment). Away from the coasts, the number of falls drop off dramatically - there are few in inland Australia and very few that are permanent.)
The vast majority of falls are simply inaccessible. Or, if i manage to get to the point where the fall drops from a cliff, i sometimes cannot safely take images of it (cliff edges are very brittle) :/ Sometimes i get images but i do not publish because i think that the area is too dangerous or the fall is too far off. A couple of times i have published to show an avoidable danger. Nothing lost, they are all fun walks.
Most of the falls i image have some spiritual or historical significance, having an ancient name and a viewing place for the falls is accessible. Surprisingly, I am finding a lot of 'lost' or 'forgotten' falls in old newspaper reports :) I guess there was a lot of interest in waterfalls up to about 1930, and then interest dropped off with the great depression until recent times. People forget. 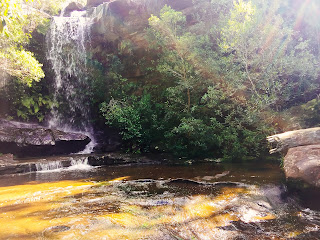 The top plunge of this waterfall is an easy hike through the Park although it is largely obscured by trees from normal vantage points. The trees also prevent top and bottom plunges from being imaged together.

Theseus's ship is rebuilt over the centuries: as the planks rot, every one is eventually replaced. Philosophers still debate this paradox: can we still call the rebuilt ship 'Theseus's ship'? Likewise waterfalls. As I watch, every individual drop of water constituting a fall briefly shimmers and then departs. 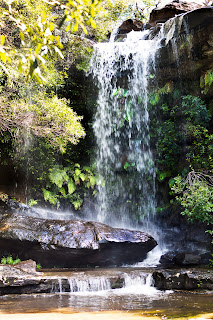 I once had to buy a lake for a guy who was not good at listening. He was insistent that he wanted to buy all the water in the lake, but refused all sensible advice about the matter. The only time he stopped to listen to me was the day after the sale, when i had to tell him that because of rain, some of his water was starting to flow down the river to the sea.

The ferocity of these places when in full flood is to be seen to be believed. Only the really hard stuff remains.


A small rock pool fed by a cascading fall. 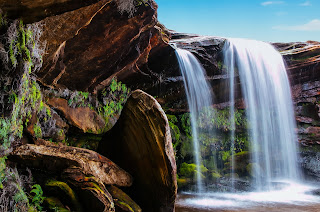 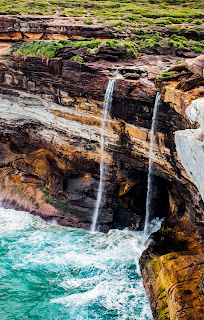 One of a handful of waterfalls that empty directly into the ocean, this twin horsetail waterfall can be accessed from Wattamolla Beach (1.5 hrs return). The shortest route is straight from the road, about 15mins by bike or a 30 mins walk.