The Mitchell River rises in the fractured cold escarpments of the Victorian alpine region near the isolated settlement of Dargo. 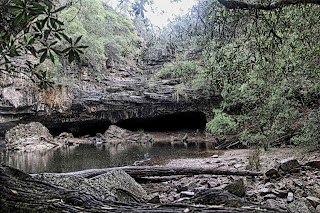 Its 4,500 sq km catchment provides a power of water that has cut a long wild gorge, which provided a backdrop to one of the great adventures of East Gippsland: one that seems to leave tantalizing insights into the lore and ancient history of this place. The river flow has been measured below the gorge, at Glenaladale. The flow has been measured for 80 years, and averages 620 megalitres a day, but it has been known to stop flowing during drought.

The flow starts high in the alpine bogs of the Victorian Snowfields. A while back you might have started your exploration of the area at the old cattle town of Omeo (which also leads you to the magnificent Mitta Mitta or the Tambo). But today, it is hard to go past the cool summer resort of Dinnerplain (or if you want to annoy the locals, Dinnerplate). 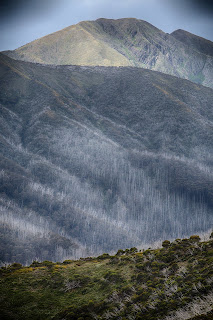 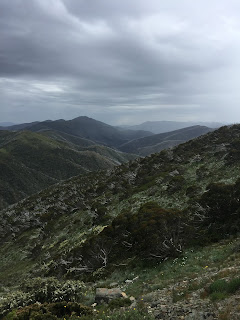 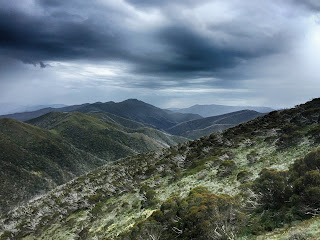 Below the great incised canyon below Tabberabbera, is a rich floodplain. From the agricultural town of Lindenow to the largest population center of East Gippsland, Bairnsdale, the floodplain is surrounded by a steep escarpment. Below Bairnsdale the river flows into an estuary reach, which has created a lengthy banked river deep into Lake King. 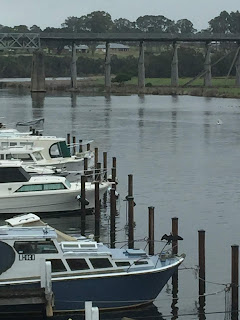 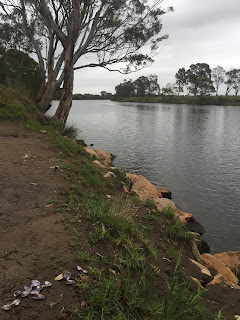 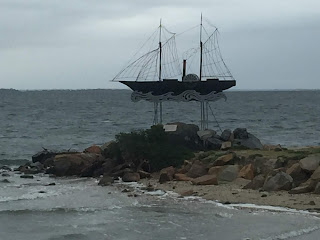 Carmichael Fall is a small plunge waterfall on the Precipice Creek near the alpine resort of Dinner Plain.

Enjoy the resort coffee at Dinnerplain, but be careful of what you are told here, for all is not what it seems. The town here shimmers on the edge of unreality, snow bound in winter and ringed by fire in summer. This is a resort for the old rich and powerful, who bend reality as easily as they snap a finger. 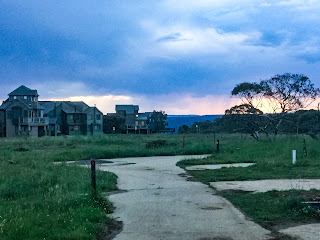 High in the alps, in summer the snow melts around the resort and the soft bogs disgorge a mountain of water. The plain becomes bright with wildflowers, and the creeks start to hurtle down the mountains. Come here to witness the birth of a myriad of small streams, the mountains full of flowers and the stark reminders of bushfire. 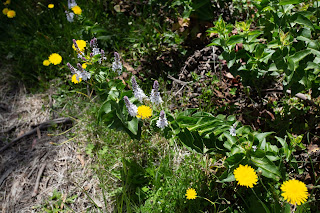 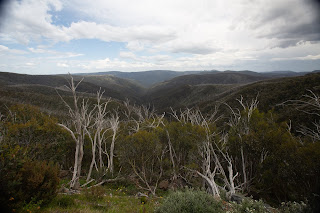 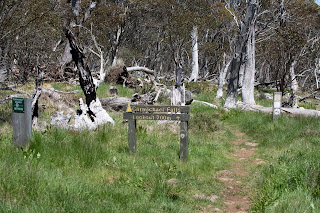 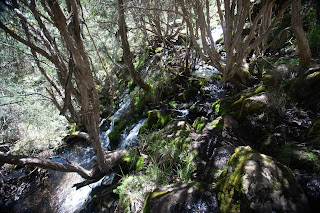 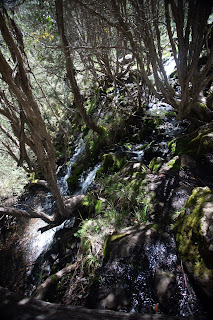 Jungle Creek Falls is situated on a trail some distance from Hibernia Trail (despite the locality, the dirt trail is moderately good for 4WD). The track to the fall is a slog, and the final approach is dire. This remote area creek tumbles down a steep valley towards the Avon Wilderness (a vast wilderness area unsullied by any human activity on maps other than the dire warning "Be Prepared"). 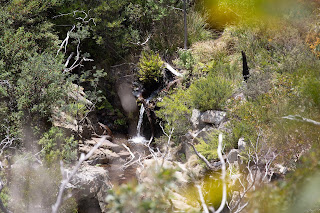 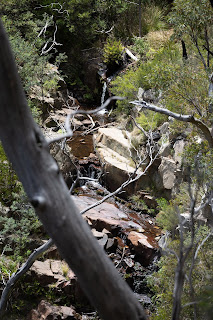 The isolated settlement of Dargo has been lapped again by fire this year. Here in the pub at the town, you will hear stories of mishaps, of broken machinery and failed attempts to venture into the remote places in the district. 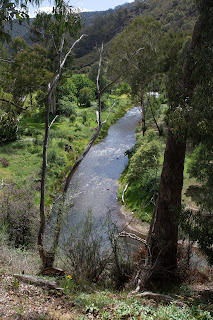 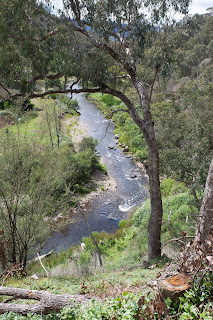 You will also hear of the old settles, the women who drove cattle to the high plains above the town and the farmers and miners who tried and failed to win a home in the wilderness. 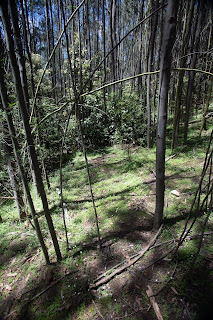 It is sometimes too easy to romanticize isolated falls. Some are sublime, but most are desperate flows of water travelling without baggage down cliff faces and rocky gorges, unseen.

The Mitchell Canyon while broad, is unforgiving, and was considered unnavigable for many years.

The warden Alfred William Howitt may have been the first European to explore the gorge in the summer of 1875, with the guidance of two Brabrelung First People Guides, Bunjil-Bottle and Master Tunmile. The adventure almost ended in disaster when their bark canoes capsized in the rough rapids of the canyon and they had to proceed on foot. After some considerable distance, they attempted to leave the canyon up Deadcock Creek (now known as Woolshed Creek) at a time that bushfires were raging around them. The creek appeared not to be flowing (as many do, in summer) and the waterfalls were asleep. 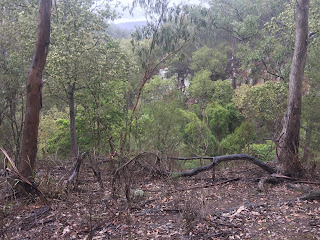 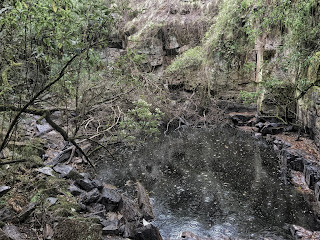 Howitt records how the expedition came first upon Dedcock Den:


"After slowly picking my way along the rocky floor of the creek for perhaps a mile, admiring the beauty of the scene, and occasionally drinking from the rock pools of "nice cool la-en yarm" (water), as Turnmile phrased it, we came to a picturesque cavern, formed by the wearing away of the soft beds from underneath a hard course of grit. It extended in a semicircular form across the creek, the rook of the cave being the ledge over which the water falls during rainy times. The (First People) were delighted with this "house", and planned to themselves how they could come and camp here and collect the tails of the "wooyarl" (lyre bird) among the scrubs of the bush, and feast on the native bears and wallabies, poor unsuspecting creatures of the neighborhood." 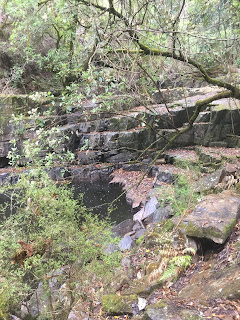 Howitt explains that they passed over this waterfall pool, by following a wallaby track up the edge of the ravine they found themselves in. They continued upstream to a second, larger fall.

The Den of Nargun Falls is an intermittent long cascade with a <10m plunge fall on Woolshed Creek. 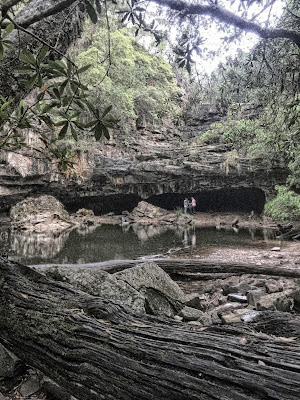 Further up the creek they came to a "wonderfully picturesque and beautiful place" surrounded by steep cliffs. When they arrived, lyrebirds were dancing in front of the cave. Howitt sat and sketched the fall, while he listened to his two guides exploring the cave behind the fall, full of stalactites, exclaiming "ko-ki" in wonder and talking about the place. It is this conversation that resulted in our present naming of the site. Turnmile suggested that this would be a great place to set up home. However, Bunjil-Bottle sounded a warning, considering that the cave was a likely haunt of the mysterious creature, the Nargun. Howitt went on to describe some of the beliefs about the Nargun: "...it is like a rock ("wallung"), and is said to be all stone except the breast and arms and bands. It inhabits caverns into which it drags unwary passersby. If you throuw a spear or fire at it with a bullet will turn back on you and wound you." 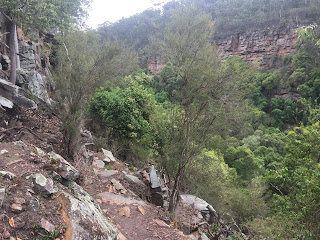 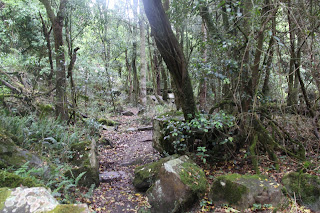 The account by Howitt, insofar as it emphasizes the lack of prior visitation and isolation of the place, is challenged by modern recollections of First People. It is said today that this is a place sacred to and well-known to women, that men are not welcome. As a sign of respect to the elders, i did not enter the cave.

In summer, this waterfall becomes dry. Finding no way up the steep gorges (estimated to be 400-500') Howit and his guides made their way up the face of the waterfall by cutting a tree and resting it against the side of the fall.

Howitt also noted that the Nargun also inhabits the the reaches of Lake Tyers with which "Dan's mother" had a fight - a place which could not be more different than the Canyon. 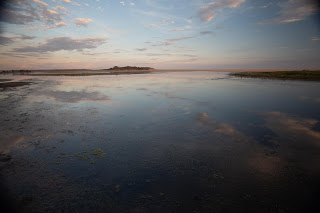 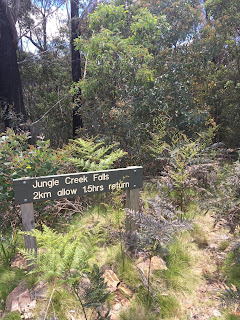 The track to Jungle Creek Falls can be found down Hibernia Track (you will see a faint "car park" on the north side of the track in the center of the map. Get a high definition map before risking this.


Note on rating system:
The rating system has been developed for SE Australian Waterfalls by weighing 5 different qualities, namely Access, Visible, Pristine, Safety, and Spectacle. These are presented unaggregated and aggregated in a single result out of 5. Most falls look good when running but arriving at a running fall is in the lap of the gods, so the quality 'Spectacle' is determined irrespective of flow. All waterfalls are unsafe. If you go to a fall, be prepared (slips, snakes, sun, spiders, and edges).