Sometimes, when adventuring, i stop and grit my teeth and wonder if i am going to make it back. That is when i know what it is to be alive. 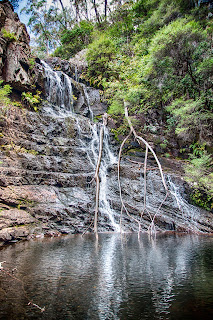 After heavy rain, every gully hosts a fall.

The First People of the Oberon Plateau, the Gundungurra, knew things we do not. They knew the ancient name of the rivers and the falls, they knew how to survive in impossible conditions, and they knew a medicant that, rubbed onto the body, protects it from extreme cold.

"Having previously made a large fire, they all went to sleep on the lee side of it without any article of covering. Nature appeared to compensate in some degree for this want with a covering of hair, which was particularly observable in the very old ones.. They appeared to suffer little or no inconvenience from change of weather, for they continued fast asleep during a violent shower of rain that lasted three hours, the thermometer standing at 39 (4 degrees centigrade)."
- W Wentworth, 1824

Kant resisted calling such a place beautiful. Instead, he called it an "outrage on the imagination" - sublime. 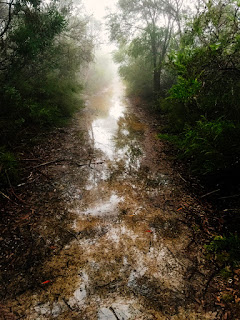 I first felt this in the morning time here, after a walk on the clouds: the joy of being alive. For many years i closed my eyes to the beauty of the bush, pursuing a career single-mindedly. Since then, I have realized that careers are not that important.

Australia's bush poet, Henry Lawson summed it up in "Clancy of the Overflow".

"I had written him a letter which I had, for want of better
Knowledge, sent to where I met him down the Lachlan, years ago,
He was shearing when I knew him, so I sent the letter to him,
Just ‘on spec’, addressed as follows, ‘Clancy, of The Overflow’.

And an answer came directed in a writing unexpected,
(And I think the same was written with a thumb-nail dipped in tar)
'Twas his shearing mate who wrote it, and verbatim I will quote it:
‘Clancy's gone to Queensland droving, and we don't know where he are.’

In my wild erratic fancy visions come to me of Clancy
Gone a-droving ‘down the Cooper' where the Western drovers go;
As the stock are slowly stringing, Clancy rides behind them singing,
For the drover's life has pleasures that the townsfolk never know.

And the bush hath friends to meet him, and their kindly voices greet him
In the murmur of the breezes and the river on its bars,
And he sees the vision splendid of the sunlit plains extended,
And at night the wond'rous glory of the everlasting stars.

I am sitting in my dingy little office, where a stingy
Ray of sunlight struggles feebly down between the houses tall,
And the foetid air and gritty of the dusty, dirty city
Through the open window floating, spreads its foulness over all

And in place of lowing cattle, I can hear the fiendish rattle
Of the tramways and the 'buses making hurry down the street,
And the language uninviting of the gutter children fighting,
Comes fitfully and faintly through the ceaseless tramp of feet.

And the hurrying people daunt me, and their pallid faces haunt me
As they shoulder one another in their rush and nervous haste,
With their eager eyes and greedy, and their stunted forms and weedy,
For townsfolk have no time to grow, they have no time to waste.

And I somehow rather fancy that I'd like to change with Clancy,
Like to take a turn at droving where the seasons come and go,
While he faced the round eternal of the cash-book and the journal -
But I doubt he'd suit the office, Clancy, of ‘The Overflow’."

There is no easy way to take pictures of the Thurat Walls falls, let alone apply any skill in composition. I was drawn to them by the sound of the tumult, and remember seeing them as a flash of violent lightning across the abyss. This image has been sewn together from multiple images taken in rain through a forest of wattle on the edge of the 370m (1200') cliffs. After heavy rain, every part of the plateau is awash. 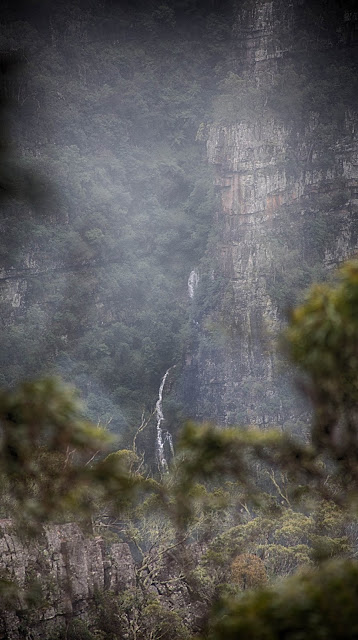 Some of the first peoples of my country believed the world to be flat, that the sun (a woman) dived into a great hole at night and traveled underground to arise in the morning. In a place like this, that story cannot be disproved :) 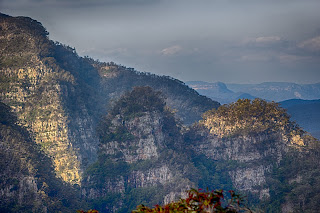 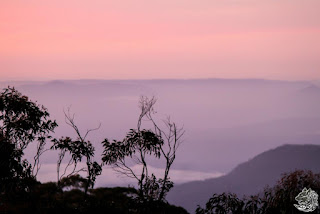 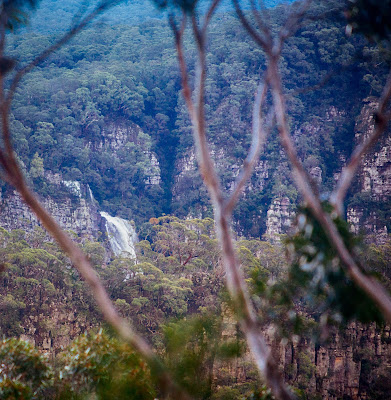 Some say this place is one of the most impressive Australia has to offer. It defies imagination and kicks away the supports we build to hide the world from us.

The top two plunges of this remote 380m (1250') segmented fall in the southern Blue Mountains taken from a vantage point along the climb down to the nearby Kalang Falls. Only birds get to see the entire fall.

Image: A single shot in light rain and mist from an adjoining ridge (which obscures the lower fall). The shot has been slightly dehazed and toned for structure and depth. 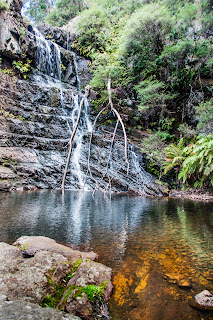 The wilderness escarpments from Kanangra Walls to Mount Cloudmaker drop precipitously. When it rains the top of the escarpment fill ankle deep in water and you seem to be walking on clouds. Waterfalls can be heard in profusion but decent vantage spots are far and few between. 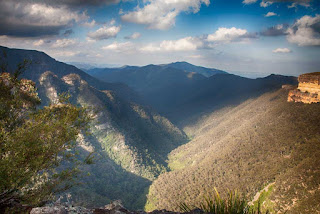 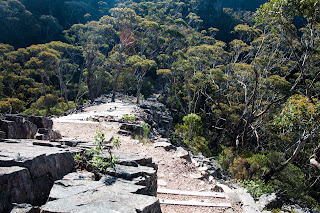 This protected gully holds the plunge pool of the Kanang Creek Fall (only partly visible). Access to this vantage requires an exposed climb along metal ropes.

The older rocks (mid-bottom of the falls) date from the Devonian Period (400m years ago). 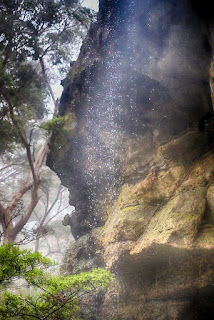 Imagine a place so remote that very few have ever seen it. There is a cave at the bottom of the escarpment large enough for three tennis courts. The cave entrance is protected from the elements but is open to the sky, and a curtain of waterfalls create a wall of water you must pass through to enter. 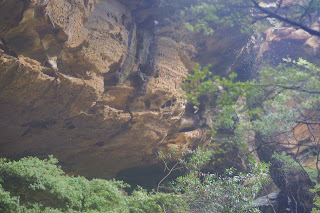 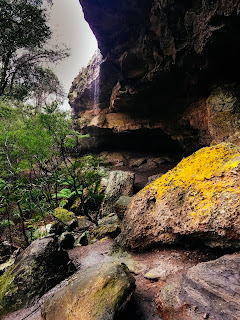 The cave itself extends back some distance, far enough to be dry. You can camp here and light a fire. 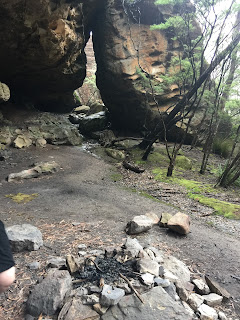 Once, people danced on the floor of the cave (early European settlers built a wooden dance floor here). The settlers are all gone now, only the cave and the waterfall remain.

In the reflected light of a fire at night, the waterfall looks like stained glass in a great cathedral. I am fond of this place, and have used it to tell the story of Hanora.

People once lived here, in this remote place. 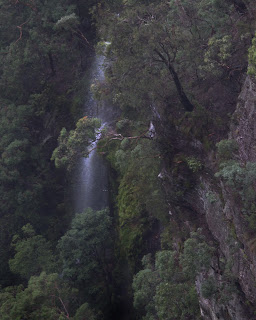 "Touch the spinning thread of destiny,
Rejoice the portion racing past your fingertips,
Relish your life in fair wonder with others,
Until the great destroyer takes us back whence we came." 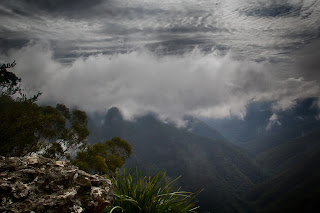 All small escarpment falls wake after rain. A while back, i set myself the whimsical notion of visiting some of the 15,000 falls of SE Australia. Of these about 300 are named and perhaps 1,500 are shown on topographic maps (topographic maps are a poor way of finding falls). Surprisingly, i find most falls on public land and while many are surrounded by private property, the creek/river and falls were retained in public ownership by the original surveyors. Lots, like this one, remain unnamed in our present era. 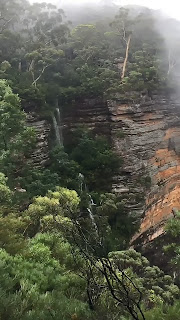 This is a still from a video taken in mist and rain. It is perhaps typical of many of those other unnamed falls - but i can assure you that while the image is misty, the sound of the fall was loud. 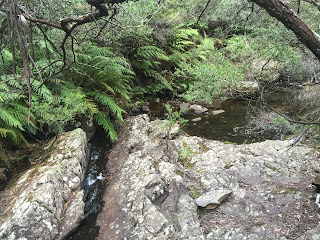 Many of the falls noted in this article are inaccessible (save by experienced abseillers) and are intermittent. An exception is Kalang Falls, which trail is rated 'hard'.