This is an ancient place. 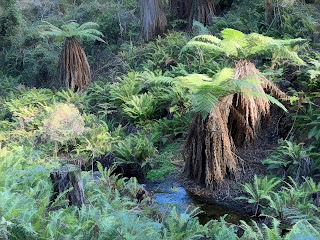 At this 'source' of the Yandyguinula (locals call it the 'Yandy') are some of the largest tree ferns i have measured in the wilderness. Height and width suggest these are very old. Despite the forest around them burning, the deep curtain of old fronds at their base suggest that they did not get touched by the fire storm 18 months ago (the fronds are extremely flammable when dry).

Perhaps the answer lies just below them – a couple of meters upstream the headwaters of the Yandyguinula Creek issues from a spring in the wall of a low blind ‘canyon’. 'Upstream' of the place of the spring, there is a long low soak, but no running water. Fifty meters downstream, the stream meets another tributary, in a flurry of small waterfalls (which are quickly becoming obscured by bracken and ferns and so might, once again, become lost to human view). This emergence, from a dip and a spring that heads a small gorge, is typical of the hundreds of small sources of the creek. 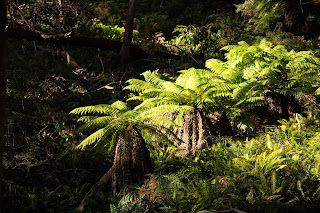 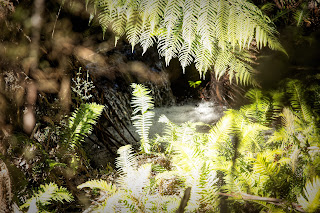 I once read a book about the search for the source of the Danube River. The author finally trekked to the top and found a dripping tap. This Yandy source is, by comparison, a striking natural improvement. it also suggests that there has been little disturbance over an extended period - despite bouts of fire, drought, ice, flood and deforestation from logging.

Of course, there is no single source for the Yandy - as the altitude increases, it splits into a multitude of  smaller streams, each increasingly faster and steeper. But this is one is worth close examination although it will probably disappear back into the bush in a relatively short time. The trek requires a bush bash to the source and it is beset by a couple of problem areas of bracken, lawyer vine, blackthorn and thistle (it is not suggested at any time there is any warmth that might stir the resident snakes or spiders). 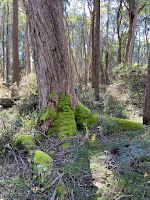 At the start of the walk we took a moment to follow a wombat trail at the start to a ridge overlooking the main path of the Yandy below. 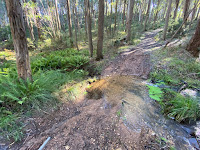 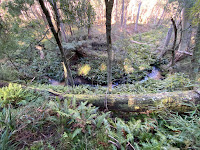 On the morning of the walk, the temperature was still below freezing, and the path had a lot of ice. The male bowerbirds were not in evidence.

As we rejoined a defined track, we tracked towards a lyrebird and spent a moment recording it. There were a number of wrens, thorn-bills and larger birds in evidence (here a Currawong and a Brown Thornbill, both found in the burnt zone).

There was plenty of wombat scat with some freshly dug burrows. 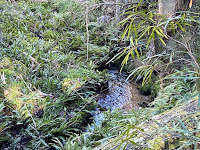 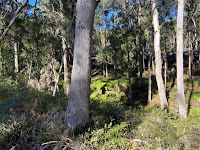 This path may become very difficult when heaths grow back - the sharper heaths and vines are already in abundance. Lawyer vine is strong and can hold a person in place. Blackthorn is as sharp as a metal 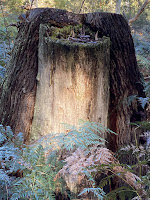 Scattered through the area were the remains of trees taken during the period of intense logging here. These trees were used to build the town of Queanbeyan 50 kilometers below, and the signs of old oxen trails are still fading into the environment. Recently, tree remnants have been used in other Australian forests to date significant climate changes over the past thousand years - perhaps these too will one day serve a similar purpose. Some of those near water edge remain quite waterlogged, and seem almost pristine. On higher ridges, there is evidence of fire and wind storms knocking over some trees, with root balls holding rock walls into the air in their upturned root systems.

The trail trace can be found on Gaia. This starts and ends as with the Bowerbird Falls Loop, save that  part way through you leave all the trails and head for the center area of the loop.