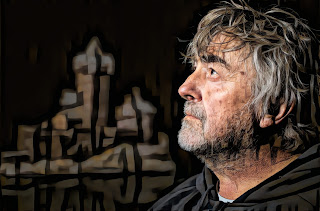 During the morning, the beach was raked smooth by the wind. As I fell in and out of sleep, tents were erected along the shore.

A woman nearby called to her God in pain, shaking her head in misery.

A man nearby avoided my glance, concentrating on managing the pain he bore instead. Later that day, his wife, dressed formally in robes came to sit next to him. She waited until he greeted her, and then, in Arabic, spoke to him for hours without drawing breath. I saw him nod and heard him sob and laugh, but his eyes did not leave hers once during that time.

Family joined the woman. Sisters with children, both newborn and tablet aged, whispered, and planned. Brothers sat around the tent, arguing about the war, the missiles, the cost of a wife, and traded tobacco. Old men came as well, with phones, to be near and talk afar.

The woman who had called to God smiled with the weight of that other family, even as they took her breath away.

At first, I wished that I was back out on the ocean, away from the sounds of others. But when I saw the longing in the man's eyes and the joy in the breathless woman, I recalled the joy of companionship.