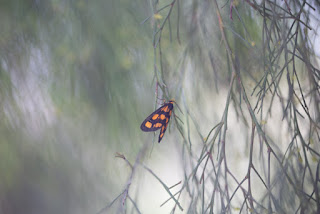 A moth pollinating tiny flowers of a Native Cherry within the fire zone of the Tallaganda Wilderness.

For much of the 2020, the Tallaganda wilderness was closed (including common access points) because of the extreme danger posed by falling trees in the fire zone. During that time, i was able to hike into the remaining unburnt forest and an adjoining area of fire affected forest outside the prohibited zone with a group of local land owners, to conduct a side-by-side assessment of wildlife in both zones.
We were able to gain access to creeks and waterfalls unseen for decades hidden beneath tons of invasive weeds (esp. blackberries) and conduct a preliminary assessment of species damage and recovery. The results will form the basis of submissions about the management of the wilderness area into the future.

One shock was the survival of specific types of trees, seemingly untouched by the inferno that burnt around them. The temperature of the fire in this mountain ash – peppermint gun zone could have reached 1,000ºC at forest floor level. 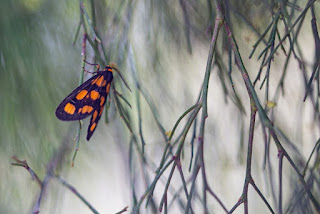 Exocarpos cupressiformis: One group of trees to survive the inferno forms the setting for this photo is the Native Cherry, a form of Sandalwood which looks like a cypress. It has needle like leaves which can bear a heavy crop of fruit with the cherry ‘seed’ on the outside of the flesh.
The tree is surrounded by mystery. It is commonly thought to be a parasite on host eucalypts, but this is clearly not the case with established trees. It is also believed to be toxic to stock, but there is no proof of toxicity. The (edible) seedless cherry is sometimes suggested for cultivation, but this has not proceeded.

Asura cervicalis: Within the safety of these trees, pollinating moths have also survived. The Asura cervicalis are usually observed eating trunk lichen off Ficus, Acacia and Eucalyptus species – here they are colonizing the Native Cherries.

A month on from the declaration that the fire was out (and perhaps 2 months since the fire ravaged this area) the Native Cherries were heavy with tiny flowers and the trees were full of moths. An owl was nesting in the top of one of the trees.
Return to Tallaganda Resource page
Labels: Tallaganda wild wildlife