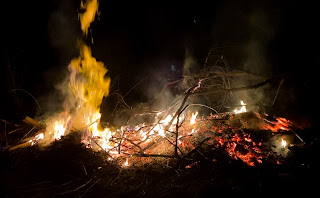 Within a small New England town three libraries are engaged in a life and death struggle.

Betty: Chief Librarian on the front line of the advance of the new technologies. Loves books but has a dim view of writers. Within Betty's Library, there is a writer's group, being managed by Thelma, Betty's senior librarian. Free of effective curation the modern writer can be a powerful force for change, good and evil.

Thelma: 2IC at the library, has a child at home, and is researching a library exhibit about Sir Arthur Conan Doyle and Sherlock Holmes. In charge of the Library's Writers Group (but, then, perhaps that is going a little too far).

Father Luis: Librarian at the town's Monastery. Strongly adheres to wisdom of the Church leaders who banned the Dewy System from his library. Betty had once whispered to Thelma that Father Luis had sought special dispensation from his silent order to meet with her and the local Book Club, to keep the Order up to date with Current Events.

Sara: Baby sitter turned dragon-carer. Sarah had just dyed her hair black but really wants to go red. Still in college and, recently, busted up with her boyfriend. Thelma has dismissed rumors that Sarah only comes to the library to access the free Wi-Fi.

Rodi: Friend of Sara. Rodi is trying to get a job at the town library and works here from time to time as a volunteer. Shy and retiring, Rodi does not identify immediately as male or female. Rodi has been reading "The Power of Positive Thinking" for a while now and had updated the Library’s online tracking register, which they had set up, to indicate that they had got to page 45.

The Little Dragon: Vulnerable to her appetite, consuming more than she can understand, susceptible to all those things that can destroy electronic knowledge in a moment. But she is also vulnerable because, unlike Betty's Library, there is no one to organize and curate the volumes she consumes. The little dragon is the darling of youth, here represented by Sarah and Roddi. Enthusiastic and kind, englamoured by the beauty of the beast, but all too well aware of its vulnerabilities.

Ged Richards: a local farmer who knows a bit too much about books and writers and publishers. He has unexpectedly inspired the Library's Writers Group to fill pages with plots and characters.

Ray: A slight man who has been laid off from the town's co-operative shoe factory, he is writing a spy story featuring mass murderers.

Annapurna: Writing about a woman detective but wants to write about the threat of the internet.

Jane: Working on a vampire novel and dabbling in conspiracies. Nick is trying to save her.

Nick: Relatively new in town, same age as Emma and dressed in cute casual clothing. He had just moved into an old place down near the lake. Suffering from amnesia he also has trouble holding a pencil and cannot write. Jane is helping him.

Emma: Had some problems last book and is currently living with her sister in a commune upstate.