Fanfare for a Beggar 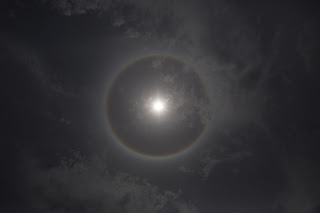 Outside, ice halo wraiths
and blizzards howl with cold wind's barb
Inside, next to dancing flame, red-blue
Wondering where I last saw you.
A travelling show in one of those towns vague
Now gone, carried away by drought and plague
The midnight crowd had quit the place
While I was having a tattoo cut in to my face.
For I had come, a Palladium to claim
But while I sat I heard you laugh, as if in blame
And to dim the pain, I asked your name
But you shrugged and laughed again,
"Just a potion seller
In a travelling show:
a Beggar
Herbs and stories I blend
Watching as the world begins to end."

Palladium: the “Luck of Troy" was a decaying piece of wood carved in the form of the Goddess Pallas Athena. The Gods themselves gave the artifact to the city with the promise that Troy would not fall so long as it was within its walls.