Disorder while wrestling with light 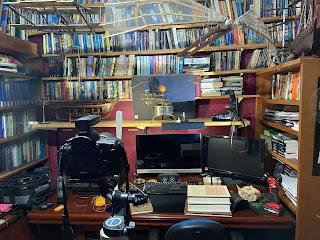 For the past half decade or more, you have all been struggling to teach me how to take photos out in the natural world: waterfalls and mountains and stars. Gentle chiding (your photos are always so colorful, star fields as a general rule do not look like herrings, your Australian rocks sure are purplish) have gradually taught me some of the basics of outdoor photography and got me to a basic level of competence while hanging from a rope or sliding down a slope to get a picture. Some of you have gone further, encouraging me to record video, animate sprites, build small movies, write short stories and construct long tedious poems (a bit of payback there).

By and large, it has all happened in here, my study. There have been exceptions: for short periods during this time i have worked from Park Slope in Brooklyn, Paradise in Lakes Entrance, the wilderness of the Snowy River, the canyons of the Wollemi. But, by and large, it is here that most of the serious work gets done – and before the joys of Tipua and G+, it was here I helped write the Constitution of the last Australian jurisdiction to attain self-government, and to rewrite the entire civil law of that place. Here, i belted out the uniform Australian law of defamation, the new financial framework twixt the federation, some of the wrinkles in copyright law, any number of cases before superior courts, and the health response to wave after wave of challenge.

I have failed here more times than i choose to remember. It took me three times to get my heavy rigid truck license when learning to be a volunteer bush fire fighter (a much harder task than learning testamentary law). When i failed to save a young boy from dying high in the forests, and fire swept down over Canberra, it was here i broke down. So, you see, with this disorder, my canvas, this is the place i will live and will die.

There is an ancient library of books here, full of stories of life and death. Dangerous books, full of frightening words, some of them. And then, within the computers, a 100,000 more and, at last count, five times as many images of the places i have explored since you all entered my life. Together they are beyond sensible organization, or use by another. They will become books to be burned and forgotten in time.

But i have learned something new in the past week, from an unexpected source. One of the great world photographers, Eric Raeber has been running a mentorship on taking control of light (a course notionally about flash photography but perhaps a little deeper about taking control).

Here, as you can see, i set up my first assignment shot where all my other schemes have been birthed. And when the flash ignited, every surface in the place jostled to add their own imprint on the final image through reflected light.

Instead of taking control, within this place, every piece i construct is the product of both the new flash and a thousand unplanned reflections.

The lesson i learned here last night was that letting the familiar control the present, excludes you taking control.