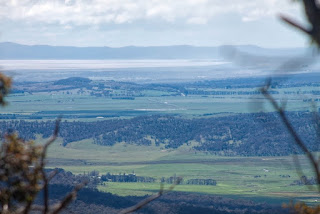 West of Tallaganda and East of Canberra/Queanbeyan is a large mountainous wilderness.

If you say Yanununbeyan aloud you will hear the harsh echo within, but no-one remembers what “Yanununbeyan” means. Y-an-un-un-bey-an has two discordant echoes – the longer ‘an’ and the shorter ‘un’. This suggests that the name itself might have served an interesting location finding purpose for the first people. As a child, old bushmen showed me how conical mountains give rise to echoes – the presence of two conical mountains nearby with rock faces lends itself to two slightly different echoes. Shouting into the sky ‘an’ and then ‘un’ from the local creek will generate a sound delayed response which ‘tri-angulates’ your position to yourself. By incorporating the delays into small pauses within the name, and shouting the entirety, the shouter conveys their location.

Perhaps, the name signified the silvery towers of the black ash trees on the high peaks to the east. Or, perhaps, the certainty of running water in the highland bogs, green swampy open areas under the gum clad hills. Maybe it simply echoed voices long silent in this wild-er-ness.

The roads to the area have gradually fallen from common use and have returned to the forest. Today you can drive into the wilderness along Woocara Trail to Apple Box Flat (a congenial swamp next to the less friendly Murdering Shed Flat, the site of a former school). From there you can continue to Mount Foxlow or hike to the top of Corner Mount, stepping around ancient trees and over wildflowers that shine like the gums as they repeat themselves all over the dusty forest floor. 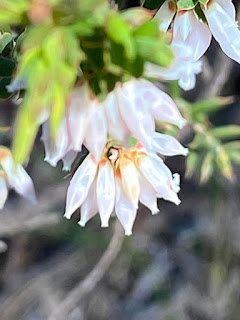 This is an Epacris (Epacris robusta – Round-lead heath) which is an Australian cousin of the Erica, Rhododendron, Azalea and Pieris. Here they are generally a small prickly leaf bush – but they have lovely sprays of colors. 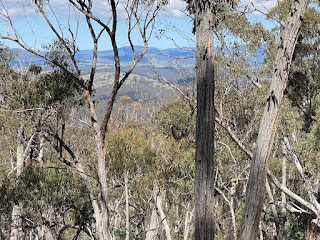 From the top of Mount Foxlow (1220m, about 400m above the valley floor) are splendid views through to the north eastern valleys. At top is a remnant stand of Silver Ash (which Australian foresters still cut closer to the coast to turn into paper) above a dry rainforest (which always throws me, but over here we have rainforests in deserts).

From here i could see to the edge of the world, once again confirming the theory that the world is almost completely flat, and (see image at top of this post) counted off from nearest to furthest, the Primrose Valley, the Valley of the Molonglo, and the Valley of the re-emergent Lake George (which local lore claims spends each alternate decade holidaying in China before refilling its local basin). The keen of eye may just detect in the Molonglo valley a small billabong (the Molonglo Lagoon), and the lines of one of the largest world telescopes, the MOST (the Molonglo Observatory Synthesis Telescope).

The last bit up the mountain was very steep and quite wet, with a smattering of grassy flat bogs, small waterfalls and tiny lakes.