Brutalism, the architectural movement has come and gone. Remember those grand concrete buildings of the 1990's, that are being pulled down as eyesores all over the world?
However, brutalism might offer a solution to a framing problem i have been having with my waterfall pictures.  Put simply, ordinary frames don't match my compositions: my falls are of rock and broken ground, and do not look good gentrified behind glass. To add to the problems, they are odd shapes and do not fit ready made items.

So, i spoke to a couple of people who i trust, and  here is their advice:
1. Don't bottle up the water in frame edging. Let it pour off the edge of the image into air.
2. Look around. Choose something that resonates with rocks and trees and water.
3. Dont be frightened to do something different.

1. i nailed a simple frame of DAR leaving 2cm free around each edge and (light) back board. There is nothing nice about the frame - all the workings are exposed, like the fall. 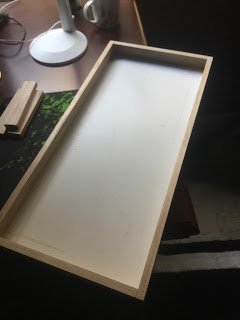 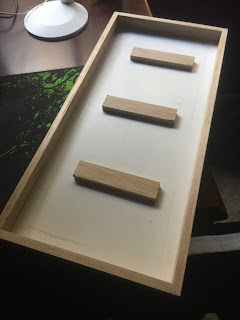 2. i cut a light wood support for the photo and then glued the photo to the support using acid free spay adhesive. I cut the support free hand, leaving errors in place. (if you want something less brutal, cut square a fraction under the size of the photo and when attached  - trim and meld photo edge in with a safe wood sealant. Here, checking photo for fit before adhering to support. 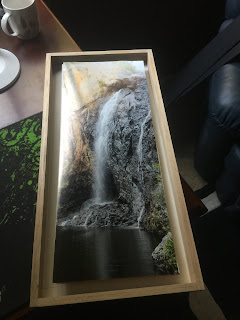 3. i cut lifts and inserted a black card into the back recess of the frame. I glued the lifts in place and then glued the photo support into place. 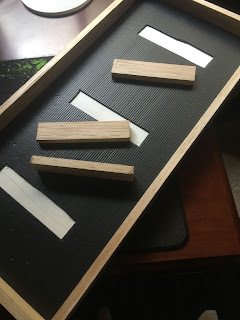 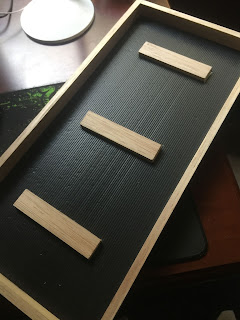 I have framed a much larger version of this print to test the scalability of the frame. There are a couple of significant differences here - particularly wieght (4 times as heavy) and visual impact. While i increased the 'margins' sightly the separation of image and frame is not as great (suggesting a longside:margin ration of 20:1 might give better visual separation). Because of the size, i fore-went some of the brutal features in favor of greater structural support (i kept the nails but set the back into the frame rather than outside it.

This photo print is double the size of the first. 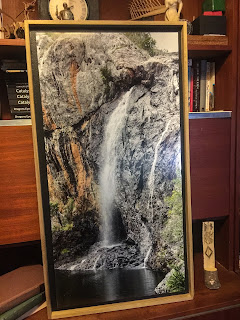 Too explore this a little further, i have printed 2 new images with a 8 by 10 ratio, and have create a 'tight frame. i will progressively trim the images until they fit 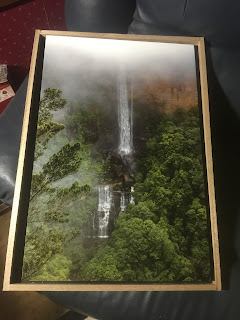 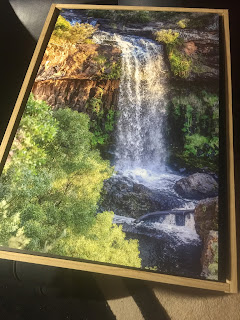 Here both images have been seated in the frame, ready to be trimmed. For test purposes, i then trimmed each frame until i arrived at a point i was happy with 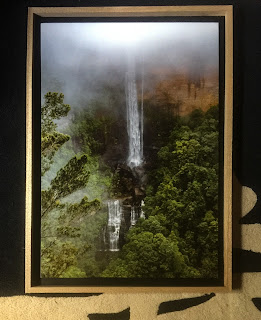 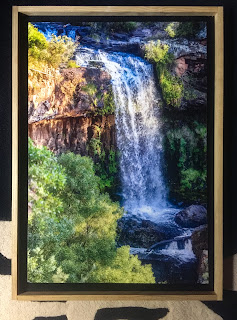 Here the final dimensions were 50cm by 40cm (20" by 16") for the photo and gap around the photo is 2cm (3/4"). The longside:margin ratio of 20:7.5 is still smaller than i thought i would get to. Perhaps the visual impact has more to the longside/short side ratio of the original work.

Update May 2021
Framing is intended to be forever - fames that just last a year are worthless.  So I went back and checked each of the initial ten I made this wayA couple had been onsold and i couldn't access them. All the others seemed to be structurally sound (I chose DAR as being fairly stable). I wondered originally whether a weakness was that the structure lends itself to spider webs and dust collection, but none seemed to be suffering.
With the largest of the frames - which I have kept - I found that the photographic media was detaching from the board :(  Easily fixed, but I guess one has to be very careful with the initial application and cure temperature.

Anonymous said…
Perfect. As I said before I knew you made it yourself.

AR Crichton said…
Perfect. I haven't seen this type of framing before and it suits the wildness of the image. Is this for you to keep?
Saturday, March 16, 2019 at 5:22:00 PM PDT

Peter Quinton said…
Thanks Anonymous - i am still getting used to the whole idea of printing and displaying physical pictures :)
Saturday, March 16, 2019 at 10:08:00 PM PDT

Peter Quinton said…
Al Chris - Hi Al. I have noticed a couple of smaller floating frames popping up in galleries, and then saw blank canvas pre-framed combos for sale (for a huge amount) in an artshop. They are actually fairly easy to build.
This one has already left the building - I am in the process of building a couple more for displays/sale in galleries but plan on keeping a couple. Next one is for a 36" by 18" version of this image.
These really suit scenes where you do not want a visual container or do not want to use glass.
Saturday, March 16, 2019 at 10:27:00 PM PDT

Peter Quinton said…
Al ChrisIt looks pretty good actually. I am astounded at how well some of the landscapes scale up - and the detail it brings with it. In this image the printed ripple (bottom right) catches and reflects light differentially, so that this part of the image shimmers. I had no idea that would happen :)
Sunday, March 17, 2019 at 3:12:00 AM PDT

Peter Quinton said…
Thanks JPP. This certainly worked well with this composition (and with a couple of small oils i saw in gallery at Kangaroo Valley recently). I will know tomorrow whether it still works with much larger compositions :)
Sunday, March 17, 2019 at 3:15:00 AM PDT

Eleftheria said…
It is a great idea, well done! There's continuity of flow with this kind of frame - it looks very much in place, very natural.
On the whole it looks splendid.
Sunday, March 17, 2019 at 5:22:00 AM PDT

Eleftheria said…
Well, in the second you added, if I see correctly, have you changed the colour of the frame or is it just the light in the photo that made me think so? If it is different than the first then I see a kind of imbalance along with the black margins..To my eye the colour somehow constricts the flow or compresses the whole photo, maybe the black margins should be bigger as well(?)
Monday, March 18, 2019 at 4:19:00 AM PDT

Anonymous said…
Maybe, since the size of the entire piece is twice as big, the width of the wood and "passe partout" (i.e. the black part) should also increase in size, because that balance works so well in the smaller size?
Monday, March 18, 2019 at 7:19:00 AM PDT

Jai Baidell said…
Looks fantastic, and I foresee additional environmental benefits once the huntsmen and skinks find that lovely sheltered space. I like the floating look for the image.
Monday, March 18, 2019 at 3:20:00 PM PDT

Peter Quinton said…
Thanks lefti Fortunately it was the light - but that is an issue i had not thought of. I agree that this works best with pale wood - and staining or oiling or, even, putting under any light that gives emphasis to the wood, would constrain the falls. I am sorry i didnt take the frame out another inch or more :) next time
Thanks mate!
Monday, March 18, 2019 at 8:18:00 PM PDT

Peter Quinton said…
Jai Baidell :) It is not just spiders and skinks (or the little green frogs that are invading inside, to the horror of the cats) - this one is almost big enough to hurl yourself through to the pool beyond. Fortunately this is a Victorian fall, if it were in NSW i might have to put up a safety rail :|
Monday, March 18, 2019 at 8:23:00 PM PDT

Peter Quinton said…
Thank you [Anonymous] for introducing me to "passe partout" :) It has a fascinating history. You are right - it is a question of balance.
Here the black area is to create a sense of separation from what ever else might distract on a wall. I think it needs more black - perhaps 2* or maybe more :)
Thanks !
Monday, March 18, 2019 at 8:51:00 PM PDT

jassibush said…
Good post, I am glad to visit your website.. This article gives the light in which we can observe the reality and it is very useful one and gives in depth information Custom Framing Atlanta
Thursday, August 6, 2020 at 1:05:00 PM PDT